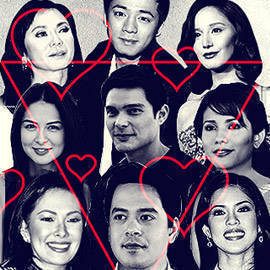 Three’s a crowd in a relationship and it gets more complicated when celebrities are involved. What with the whole country watching. SPOT.ph lists 10 celebrity love triangles that had tongues wagging.

John Lloyd comes clean about being with Shaina.

Original couple: John Lloyd and Ruffa were rumored to be taking trips out of the country and being a hot item. Though they never confirmed their involvement when it was at its peak, people knew well enough that they were connected in some way. (Thanks to Ruffa’s mom Anabelle.)

Triangulation: Apparently, there was an overlap between John Lloyd’s agreements with Ruffa and Shaina. At some point, the two were rumored to have had a word war via text messages.

Final result: John Lloyd and Shaina are now the couple of the moment. Ruffa is reportedly enjoying being single. This love triangle also has another "dimension," as John Lloyd was accused of stealing Shaina from her ex, John Prats. Thankfully, the two Johns allegedly resolved the issue in a gentlemanly fashion.

Marian clarifies that she wasn’t the reason for the Karylle-Dingdong breakup.

Original couple: Karylle and Dingdong went public when they were on the GMA-7’s Encantadia, which started airing in May 2005.

Triangulation: Karylle and Dingdong seemed like a stable, controversy-free couple. That is, until Dingdong played opposite Marian in Marimar.

Final result: Karylle broke up with Dingdong and GMA-7. During her first few weeks at ABS-CBN, public was treated to the sight of the poor girl crying buckets of tears as she sang one sad song after another. Dingdong’s name has become almost synonymous with Marian’s, and vice versa. Marian and Dingdong have maintained that they didn’t hook up until after his relationship with Karylle was over.

Original couple: Younger women could do nothing but turn green with envy when Dr. Vicky Belo introduced her super hot boyfriend, fellow doctor Hayden Kho, a man much, much younger than the controversial plastic surgeon.

Triangulation: In what would turn out to be one of the ugliest showbiz scandals ever, a video of Hayden having sex with Belo Medical clinic endorser Katrina became public in May 2009. All love (or what passed for it) was lost between the illicit lovebirds. Hayden got sued by Katrina, lost his medical license, and, for a time, he lost Vicki, too.

Final result: Showbiz scribes say say Vicki and Hayden are back together. The last public sighting of the couple was when they were briefly caught on camera...as part of the studio audience of Dancing With the Stars.

Original couple: Cesar and Sunshine met on the set of Bullet, his first directorial gig. They got married in 2000 in a beautiful ceremony held near the Manila Bay.

Triangulation: Brazilian model Marianna reportedly met Cesar in his home province of Bohol in 2007.  Rumor has it that  Cesar told Marianna that he and Sunshine were already separated.

Final result: When Sunshine confronted Cesar about the Marianna issue, he reportedly changed the topic by putting her on the defensive.  He chided her for starring in adult-themed movies (such as Magagandang Hayop and Ekis) before they were married.  Sunshine left their family home with their three little girls (Angelina Isabelle, Samantha Angelene, and Angel Franchesca) in tow.  After some time, the couple patched things up.

Rufa Mae discusses a love triangle that’s long been over.

Original couple: Rufa Mae and Dingdong dated for a year-but his family wasn’t too enthusiastic about the relationship.

Triangulation: We really can’t remember how Jessa and Dingdong got together, but Rufa Mae cried her eyes out on TV when they got engaged.

Final result: Jessa and Dingdong married and migrated to the US. Rufa Mae gave a tell-all interview about her relationship with Dingdong to YES! magazine. The two women had a feud, which soon ended because, hey, it all happened almost a decade ago.

Carmina has definitely moved on-so much so that she can talk about Zoren and Rustom (Bebe) doing a project together.

Original couple: In the 1990’s, Rustom and Carmina made the perfect couple. They even starred in a critically-acclaimed movie, Hindi Magbabago. While their fans wanted them to be together, it still came as a shock to know that they had already been married-a fact which only became public knowledge when they decided to separate.

Triangulation: Zoren and Carmina got together after her separation from Rustom. But it was still a little uncomfortable, with Carmina and Rustom’s marriage still to be annulled. Zoren and Carmina kept the relationship a secret, and it only became public when she gave birth to their twins, Maverick and Cassandra.

Final result: Zoren and Mina, though still unmarried, are still together. Mina’s marriage with Rustom has been annulled. And Rustom? He’s transformed himself into Bebe Gandanghari.

Things still seem to be tense between Janice and John.

Triangulation: John was part of a now-defunct ABS-CBN noontime show, MTB. Vanessa, a voluptuous Filipino-Canadian, was one of his co-hosts.

Final result: Janice and John’s marriage was annulled. For a time, John and Vanessa were together but their relationship eventually fizzled out. John’s now with Brazillian model-beauty queen Priscilla Meirelles, while Janice is single.

Gretchen is still the diva to watch despite getting singled out by Lani (and many other women who think she’s on the prowl).

Original couple: Lani and Bong have been together since 1987. He’s rumored to be a ladies’ man and has admitted to having one child out of wedlock.

Triangulation: Gretchen and Bong were first linked to each other when they both starred in the 1992 action flick Ako Ang Katarungan (Lt. Napoleon Guevarra M. Guevarra). The connection resurfaced sometime in 2007, when Gretchen backed out of a movie where she was supposed to co-star with Bong. Insiders hypothesized that she must have made the decision when she reportedly found out that Lani sent this interesting SMS to her friends: "Kung ikaw si Lani, ipagkakatiwala mo ba ang asawa mo na gumawa ng pelikula kasama si Gretchen?"

Final result: Bong and Lani are still together. Gretchen is still identified with partner Tonyboy Cojuangco, despite all the controversies she has been involved in.

Gelli and Regine make their peace in 2003.

Original couple: Gelli and Ariel, who dated for six years, complemented each other. She was frank and sassy, he was steady and cool.

Triangulation: Regine came into the picture during a lull in Gelli and Ariel’s relationship. For a brief while, the two made beautiful music together. But there was so much backlash over their hookup.

Final result: Gelli and Ariel eventually got back together. They’ve been married for almost 12 years and have two sons: Joaqui(11) and Julio (9). Regine is now with Ogie Alcasid.

Original couple: Kris and James come from two very different worlds. She was born with a silver spoon in her mouth, he’s a self-made probinsyano cager. Nevertheless, they got hitched in 2005.

Triangulation: James was rumored to have had an affair with Hope, a receptionist at the Belo Medical Group. He denied this, in spite of Hope’s confession that it wasn’t just a body scrub that he was getting whenever he’d drop by at the clinic. Kris and James patched things up. During the campaign season however, Kris was reported to have confronted Mayen, a fan of her husband, for becoming too close to James, much to Kris’ discomfort.

Final result: The Yaps’ marriage, as we all know, is over. We don’t know if a third party was involved, but we’re still waiting for the other shoe to drop.