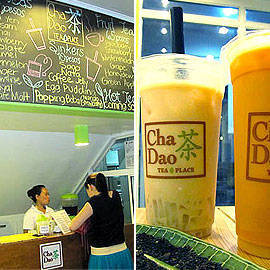 CHECK IT OUT: Cha Dao Tea Place near Katipunan Avenue

Affordable, accessible, and deliciously refreshing-Cha Dao is the latest joint to jump on the milk tea bandwagon. 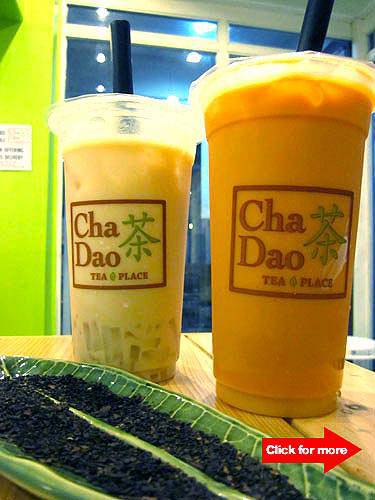 Tucked in an unassuming corner along Rosa Alvero Street (between Katipunan Avenue and Esteban Abada Street) is Cha Dao, an easy-to-miss tea place that’s half-hidden behind a wide concrete post.  Tiny as Cha Dao is, each structural element combines to counter what could have easily made it stuffy and cramped. Two small wooden square tables make up one side of the restaurant, sharing the 10x15-foot space with the kitchen and counter areas. Full-length glass windows make the whole place seem wider. Small potted plants in random corners brighten the space and complement its mint-green trim. Ground tea leaves scattered across the dining area lend a refreshing, cool fragrance.

Cha Dao's Milk Teas fare for P75 with an additional P10 for Sinkers like Sago, Nata, and Jellies. Kids would love the Popping Bobba sinker, colorful pearls that literally pop inside one's mouth, releasing a juicy fruit-flavored surprise. Fruit Teas sell for P65 while Basic Teas (Assam, Earl Grey, Jasmine) are priced at P55. The prices are affordable (nothing over P100), matching the requirements of Cha Dao’s main customer base-students. Service is made fast-each brew concocted in three to four minutes-perfect for students sneaking a quick drink before class. A delivery option is available for those craving for a milk-tea break between classes at no additional charge. According to Cha Dao owner Claudine Baron, she’s even tied up with nearby universities, giving 20 percent discounts to members of selected college organizations.

While Cha Dao is definitely not the first to jump on the trendy milk-tea demand, it's one of few that offers a range of more uncommon milk tea flavors. "Other milk tea restaurants usually just serve flavors from Taiwan which is where milk tea originated from," Baron said. "But we also offer drinks inspired from Thailand and other places." Cha Yen, better known in the Philippines as Thai iced tea, is used as a milk-tea base in Cha Dao. Made with sweetened black tea, it's much more fragrant with a stronger tea flavor than the heavily diluted standard milk tea. Pair Cha Yen with Egg Pudding to get a deliciously smooth, creamy texture.

Another must-try is the Assam-based milk tea combined with Sago. Assam tea, which originated in India, has tasty hints of malt that work well with the slight sweetness and chewiness of sago. A spicy tinge also figures in the mix-resembling curry at first, it warps into the familiar flavor of cinnamon once it reaches the back of the throat. For a fruitier fix, the Wintermelon Milk Tea partnered with Red Beans is a good option. The natural sweetness of white gourd and red beans combine well to make up a refreshing drink perfect for those hot Katipunan afternoons. It also features subtle hints of cinnamon as well. Fruit Teas, a tangier take on a fruit shakes, are also available in Blueberry, Green Apple, and Honeydew, among other flavors.

Cha Dao Tea Place Katipunan Milktea
Your Guide to Thriving in This Strange New World
Staying
In? What to watch, what to eat, and where to shop from home
OR
Heading
Out? What you need to know to stay safe when heading out