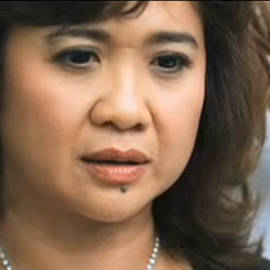 The Three Types of Acting by Eugene Domingo

Acting 101 from today’s most in-demand comedienne herself.

(SPOT.ph) Here’s another thing to do this weekend: Catch the last weekend run of the Cinemalaya 2011 hit entryAng Babae Sa Septic Tank starring the one and only Eugene Domingo with JM de Guzman, Kean Cipriano, and Cai Cortez. We guarantee you’ll have lots of laughs and perhaps you’ll learn a thing-or in this case three-about acting.

In this excerpt from the indie comedy flick written by Chris Martinez (Kimmy Dora, Temptation Island, and Here Comes the Bride) and directed by Marlon Rivera (debut film), the top comedienne demonstrates the three types of acting in her book-the very animated and singsong Elevator Acting for comedy, the hilariously high-energy TV Patrol Acting for soap opera, and the monotonic and indie favorite "As is, where is" Acting. We can’t get over the line: "When in doubt, elevator!" Plus, watch her go from full-on hysterical to absolutely flatlined as she acts out the last two styles.

Martinez told SPOT.ph, "That’s how I ’order’ from Uge. When we do a movie or commercial, I say ’Dito sa line na ’to umelevator ka, todo rooftop to basement’ or ’O, panic scene ito so alam mo na TV Patrol intensity 2 lang’ or ’As is where is ka dito papuntang TV Patrol.’ We actually use it. Para malinaw, walang agony."

According to Rivera, the three techniques "grew out of years of jokes in their (Domingo and Martinez’s) immediate barkada. 2008 pa lang we were doing them na." The director added that after the TV Patrol Acting demo, they actually had to take a break "because according to Eugene, para na daw talaga siyang maca-cardiac arrest." Domingo even told Rivera, "Hindi ko na ulit gagawin yang three types of acting, last na yan sa pelikula mo." The funny woman at one point also joked about her costume in this scene saying, "Ganun parang X-Men lang ang outfit ko? Storm lang? O parang paniki?"