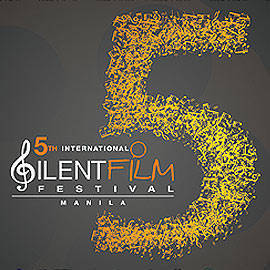 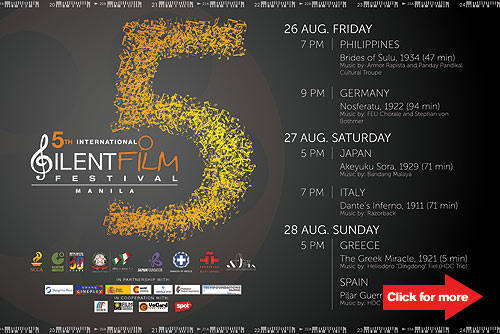 For schedules and movie synopses, check out our gallery. Click for more.

The country’s first-ever entry Brides of Sulu opens the festival on August 26, 7 p.m. with an introduction by Society of Filipino Archivists for Film’s (SOFIA) Teddy Co, who will talk about the origins of the 1934 flick. The Panday Pandikal Cultural Troupe with solo artist Armor Rapista will provide the musical score. Next in line that night is Germany’s acclaimed film Nosferatu, A Symphony of Horror by Friedrich Wilhelm Murnau, described as the precursor of vampire movies, which will be accompanied by the Far Eastern University Chorale and Stephan von Bothmer.

On August 27, the lineup features entries from Japan and Italy, including the 1929 Japanese melodrama Akeyuku Sora (The Dawning Sky) by director Torajiro Sato, who is more popularly know for his comedy films. The movie will be scored by contemporary group Bandang Malaya. Popular Pinoy rock band Razorback will play for directed by Guiseppe de Liguoro’s L’Inferno (Dante’s Inferno), which is based on the literary masterpiece by Dante Alighieri.

The final day of the festival starts with Greece’s The Greek Miracle (1921), a five-minute staged documentary that will be accompanied by Heliodoro "Dingdong" Fiel of the HDC Trio. This is the only silent film in Greek history, which will have its first international screening via this festival. Closing film is Spain’s drama-romance Pilar Guerra (1926) directed by Jose Buchs with jazz fusion tunes by the HDC Trio.

Admission is free but tickets distributed by the participating embassies and cultural agencies are required. For inquiries and reservations, contact 527-2209 (Mylene Narciso-Urriza, NCCA) for Brides of Sulu; 811-0978 (Goethe Institut) for Nosferatu; 811-6155 to 58 (The Japan Foundation, Manila) for Akeyuku Sora; 892-4531 local 143 (Embassy of Italy) for L'Inferno; gremb.man@gmail.com (Embassy of Greece) for The Greek Miracle; and 526-1482 (Instituto Cervantes, Manila) for Pilar Guerra. For other inquiries, contact 633-7851 local 113 or log on to www.shangrila-plaza.com.

5th International Silent Film Festival Silentfilmfestival Filmfestinmanila Silentfilms Pilarguerra Thegreekmiracle Thedawningsky Nosferatu Bridesofsulu Dante’sinferno
Your Guide to Thriving in This Strange New World
Staying
In? What to watch, what to eat, and where to shop from home
OR
Heading
Out? What you need to know to stay safe when heading out