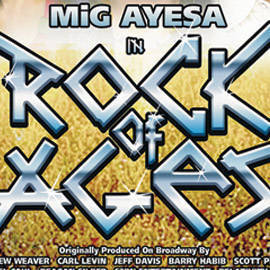 The Pinoy version of the stage musical recalls 80s hair-rock goofy goodness better than the film ever did.

(SPOT.ph) Watching Atlantis Productions’ Rock of Ages on Saturday night was a flashback to our high school days in the ’80s-replete with big hair and mullets; leather skirts, chain belts, and shoulder pads; wine coolers and mixed tapes.

I watched the rock musical with a large group of old friends, and saw many other familiar faces in the audience, some whom I hadn’t seen in decades. And while there were noticeable bald spots, paunches, and crow’s feet among those seated, it didn’t matter as the lights dimmed and the music started on stage-many of them tunes from Casey Kasem’s American Top 40 of our teen years. And yes, the show directed by Chari Arespacochaga was definitely silly, cheesy and camp, which made it a whole of fun.

Even some of the powerhouse cast members brought back memories: Jett Pangan, former lead singer of the rock band The Dawn, opened the show with a bang as the mullet-haired narrator Lonny Barnett. Jamie Wilson, whom we all remembered as the cute little boy in the old Vita drink commercial, was practically unrecognizable as Dennis Dupree, the hippie owner of the Bourbon Room. And Aiza Seguerra, who as a precocious three-year-old in 1987 won the hearts of millions as a contestant on Eat Bulaga’s Little Miss Philippines, later brought down the house as bohemian city planner and activist Regina (pronounced with a soft g and long i). 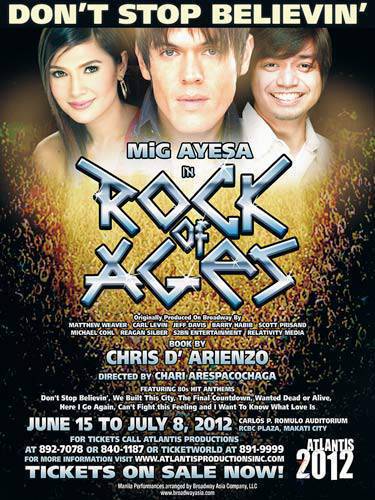 A poster for the local production of Rock of Ages

As busboy-slash-rocker-wannabe Drew Boley, Nyoy Volante had the vocals and the passion that would catapult a nobody to fame. Vina Morales, in her first theater role, sizzled as his love interest, Sherrie Christian, the small-town girl turned exotic dancer, and Jinky Llamanzares showed off her impressive pipes as the strip club owner. But it was MiG Ayesa, who played rock star Stacy Jaxx, who really commanded attention from the second he appeared. Ayesa oozed with sleazy sex appeal and magnetic confidence from his first to his final appearance, even if he didn’t have as much time on stage as the others.

Since the homage to rock music is the centerpiece of the show, it was apt that the band took centerstage, and was not banished to the orchestra pit. Set and lighting design was appropriately simple. After all, most of the show takes place in a dim, dingy dive bar. The strip joint was slightly more elaborate, with ropes decked out in candy-colored bras.

Members of the audience sang out loud and whooped at various points throughout. Seated in front of me, network business anchor Coco Alcuaz had his head bopping from the first few minutes of the show, and he was one of the first on his feet towards the end.

Claude-Michel Schonberg, the man who wrote the musical scores for theater heavyweights Les Miserables and Miss Saigon sat in the audience with Atlantis’ Bobby Garcia that night, having arrived in Manila that same day.

"I was worried I would be jetlagged tonight, but I enjoyed the show. Now I feel very fresh," said Schonberg, who had been escorted to the theater by Lea Salonga, winner of the Sir Laurence Olivier, Tony, Drama Desk, and Outer Critics Circle awards for best actress for her portrayal of Kim in Miss Saigon.

"I wasn’t sure what to expect. I brought earplugs because I was told it would be loud and noisy," said Schonberg, reaching into his pocket to show us the pieces of orange foam. "But I didn’t use them at all."

Rock Of Ages Migayesa Nyoyvolante Musical Vinamorales Aizaseguerra
Your Guide to Thriving in This Strange New World
Staying
In? What to watch, what to eat, and where to shop from home
OR
Heading
Out? What you need to know to stay safe when heading out