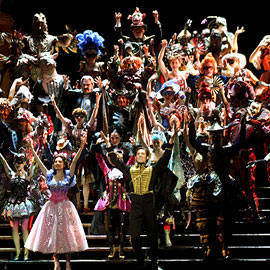 Behind the Scenes at The Phantom of the Opera

Slowly, gently, we unfurl its splendor.

(SPOT.ph) Thanks to overwhelming response, the producers of The Phantom of the Opera have just announced that they are adding 16 more shows, extending the season until October 14. 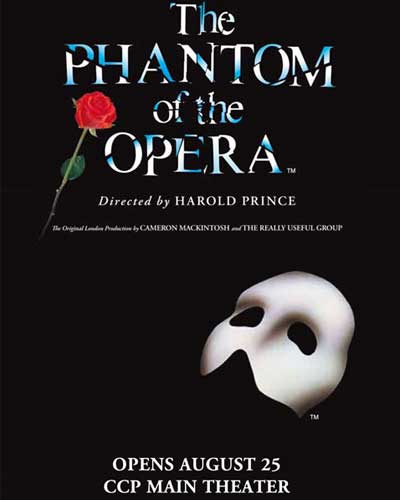 Spot.ph was part of the exclusive backstage tour of Phantom of the Opera, where the crew revealed production secrets and behind-the-scenes tidbits that would make any die-hard fan coo (or at least, burst into song). Here are 10 interesting facts we learned from the tour.

According to head of wardrobe Eugene Titus, they have exactly 12 seconds or less to get Christine to change from her orange Don Juan costume (after "The Point of No Return") and into the white wedding dress before entering Phantom's lair. "There are eight people from wardrobe to help her get into that dress," Eugene said. "That's 12 seconds no matter what happens." 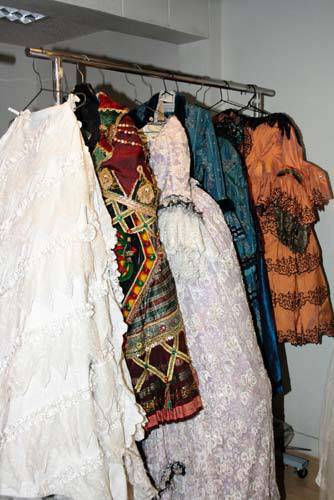 Some of the original costumes designed by the late Maria Bjornson.

2. Something is always broken.

...which is a normal occurrence for grand musicals such as The Phantom of the Opera.  "I'm repairing everyday. If [something] breaks tonight, I have to have it fixed by tomorrow night," shared Bernard Fitzgerald, head of props, who's been with the show since 1990. "Sometimes something that hasn't broken for 10 years will all of a sudden break. Every little thing is checked everyday." Even if the audience won't notice a minuscule detail like a missing ruby on a hand mirror, Bernard fixes it. It's how they keep the entire set realistic and fresh. 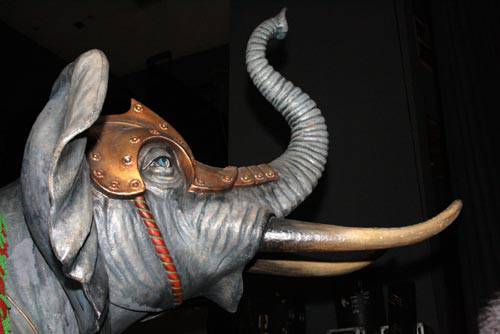 The giant elephant used in the Hannibal scene.

3. It takes an average of 10 days to set up the entire Phantom stage in a country.

As for the Philippines, it took three weeks to get CCP's Main Theater ready for Phantom of the Opera. They used two jumbo jets to fly in all the costumes and deconstructed props to Manila. 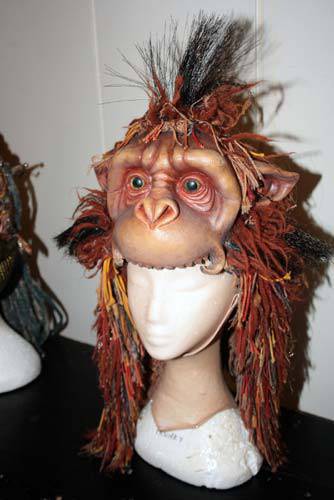 The monkey headpiece used by one of the dancers in the Masquerade scene.

4. Two crewmen are in charge of crashing the chandelier at every show.

As soon as the chandelier falls to the stage, flashes of light blind the audience while two brawny members of the crew-hiding behind the curtains-would grab the one-ton chandelier and shove it to the front stage to make a crashing sound. 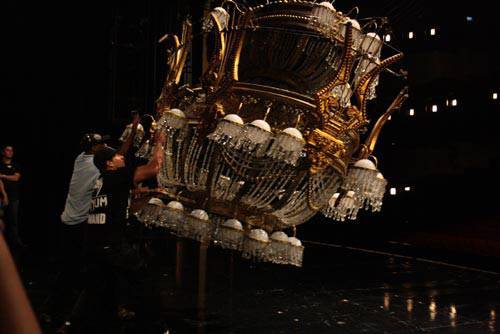 Rehearsing of the chandelier crash scene

5. The backstage space is tight.

Call it an organized chaos. "When the cast walks in that door, everybody has the same routine everyday," said stage manager Tanya Miles. The wardrobe and props department make sure that every item is in its rightful place, down to the smallest prop. Each cast member has mastered his or her quick-change routine as well as the location of each item needed for every scene. Spot.ph checked out the backstage area and we were surprised at how everything was squeezed into limited spaces up to the ceiling. "That's the blueprint of the show. Everything is so specific," added Eugene. 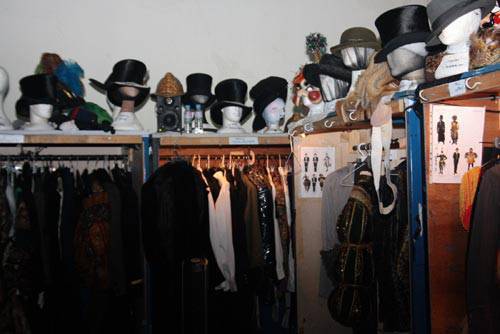 Some of the costumes backstage, organized by character and scene.

6. The music box monkey had his first and only haircut years ago.

The iconic toy monkey playing a music box version of "Masquerade" has toured the world since the '90s, and Bernard got the surprise of his life many years ago when he noticed that the monkey's hair was trimmed shorter. "Someone thought he needed a haircut!" Bernard shared. 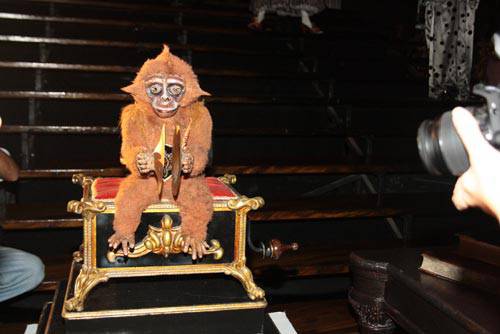 We have to say that the new ’do does suit the little chimp.

8. The Hannibal poster has a secret layer-lacquer.

"[When we first got the poster,] it was very, very shiny," Bernard shared. "We didn't want it shiny, so we put lacquer on it to make it look old." The vintage 1669 Hannibal poster is seen at the opening scene, when someone rolls it down during the auction.

8. The laundry is crazy.

In the entire production, there are 230 costumes, many of which have intricate beading and elaborate accessories. Imagine the wardrobe crew getting every item of clothing washed, dried, ironed, and prepped everyday. Every shoe and piece of jewelry must be polished, and even the cast members' undergarments are accounted for. "Each underwear is hand-dyed to match their skin tones," said Eugene. "The special tights get ordered in; they come from all over the world. We have things from Australia, America, and Asia. That is the magnitude of the show! It takes 20 of us to get the show ready for 2.5 hours of performance." 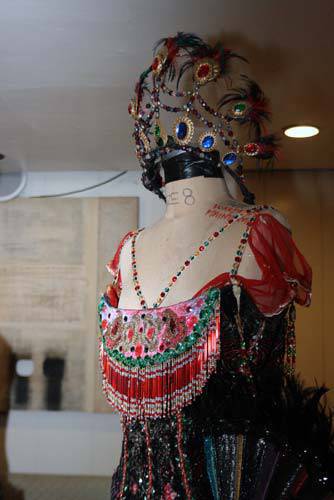 Each costume is laundered before every performance. The durable fabrics and
expensive materials are made to last for years.

9. The masquerade is one of the most difficult scenes to pull off.

"It involves everyone in the production. Some of them have to dance quite a lot," shared associate choreographer Patricia Merrin. "They also have to balance on a staircase that is very small and do exactly the same steps together, which is quite hard." 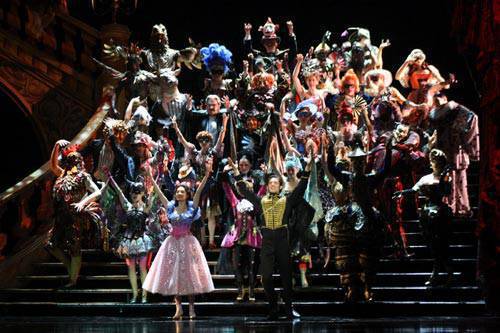 10. There are other stage tricks that they will never reveal.

That classic line, "If I told you, I'd have to kill you," applies here. While the producers and PR of Phantom in Manila were gracious enough to give us a backstage tour, there are some secrets that are kept under lock and key. Other members of the press tried asking how they do the boat scene, but alas, it's one trick they will never reveal. 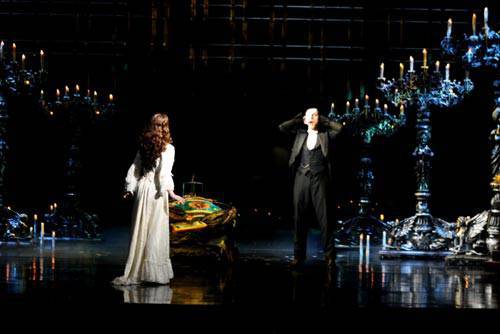 One of the famous scenes in the Phantom's lair

The Phantom of the Opera is extended until October 14, 2012. Venue is at the CCP Main Theater, Cultural Center of the Philippines, Roxas Blvd. Pasay City. Tickets are available via Ticketworld. Ticket prices: P7,280, P6,032, P4,680, P3,640, P2,340, and P1,820. Student and bundle discounts are available. For more info, visit facebook.com/POTOManila and ticketworld.com.ph.