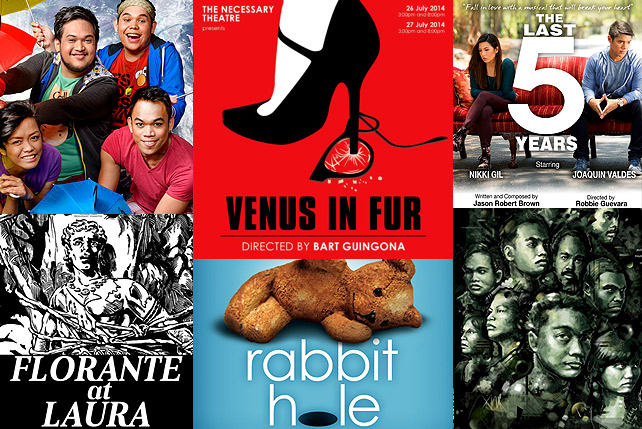 Tearjerkers, comedies, and drag! Bring out the Kleenex. 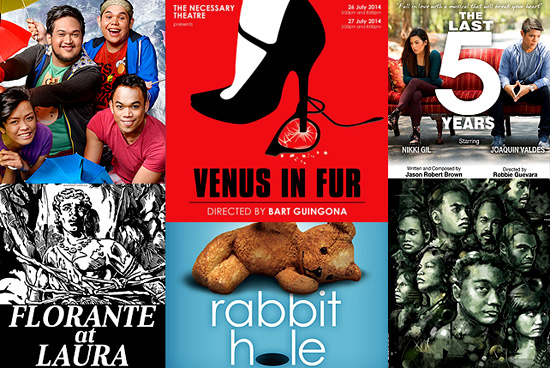 (SPOT.ph) If the early part of the year was all about ghosts, witches, and well, cocks, the theater world is about to get emotional with plots that will both pull your heartstrings and tickle your funny bones.

Rak of Aegis: The Rerun

Synopsis: PETA Theater adapts '90s band Aegis' hit tracks such as "Basang-basa sa Ulan," "Halik," and "Luha" into an original Filipino musical. The story centers on Aileen, a mall promo girl who is seeking fame to support her striving family. She lives in the flooded village of Villa Venizia where the residents' resilience shows another layer to this comedy-drama. Rak of Aegis is directed by Maribel Legarda, written by Liza Magtoto, and musically arranged by Myke Salomon. 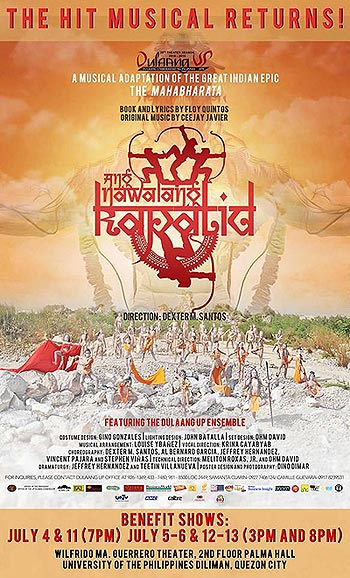 Purchase tickets via Dulaang UP

Synopsis: One of the world's oldest and longest epics, The Mahabharata, was adapted by Floy Quintos (book and lyrics) and Ceejay Javier (music) into a musical. Following the sold-out shows and extended run early this year, Ang Nawawalang Kapatid is back for another encore. Proceeds of the limited show dates this July will fund the improvement of UP Diliman's theaters, Wilfrido Ma. Guerrero Theater and Teatro Hermogenes Ylagan. 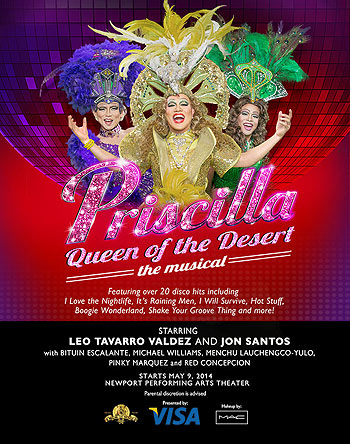 Priscilla, Queen of the Desert: The Musical

Synopsis: You can't say the word drag without thinking of glitz and glamour. This colorful musical follows three drag queens on a road trip from Sydney to Alice Springs to perform their stellar show. Each has his/her own personal reasons for going there-one to get over a recent loss, one to pursue an unusual dream, and one to meet a son he had been keeping a secret. 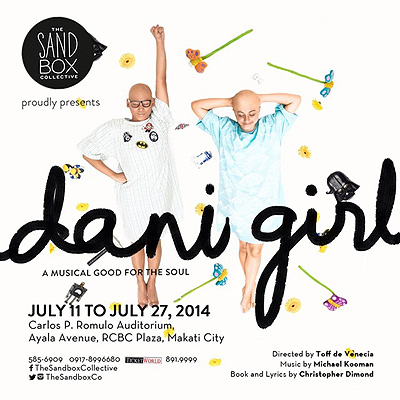 Purchase tickets via Ticketworld and The Sandbox Collective

Synopsis: This off-Broadway hit dubbed as "a musical good for the soul" tackles the uplifting tale of Dani Lyons, a nine-year-old girl battling leukemia. After three years of remission, her cancer has returned. Dani goes on an imaginary quest with her guardian angel, Raph, and her teddy bear Mr. Fritz to find her hair after losing it to chemo and to answer the fundamental question, "Why is cancer?" Dani Girl marks the debut production of Manila's newest performing arts group, The Sandbox Collective. 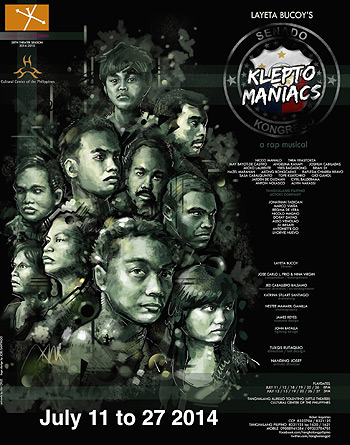 Synopsis: Fliptop goes from the streets to the stage! Inspired by the work of rapper-songwriter Gloc-9, Layeta Bucoy's production weaves our local hip-hop culture into a tale of the Filipino urban culture in search of its identity amid poverty and government corruption. 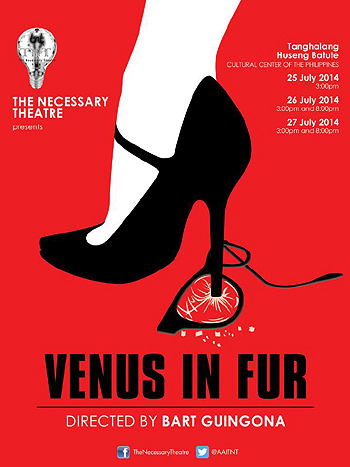 Purchase tickets via CCP and The Necessary Theater

Cast: David Bianco as Thomas and Jennifer Blair-Bianco as Vanda 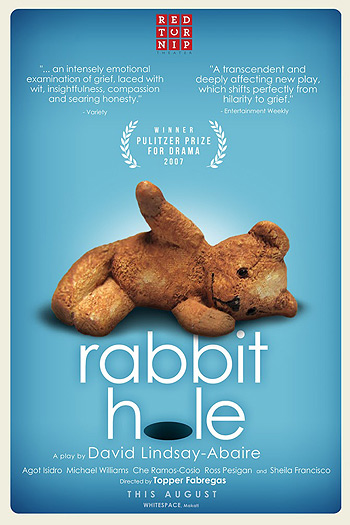 When: All weekends of August

Synopsis: Married couple Becca and Howie loses their four-year-old son to a car accident, and their grief puts a toll on their relationship. Rabbit Hole explores both humor and heartbreak as the couple examines their grief and how it affects their loved ones, including Becca's mother Nat, sister Izzy, and Ross, the young boy responsible for the tragic death of their son. Thespian Topper Fabregas makes his directorial debut in this 2007 Pulitzer prize-winning play. 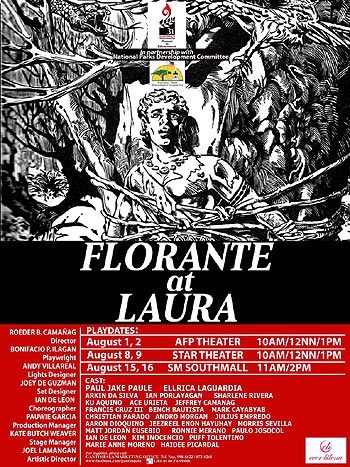 Purchase tickets at the door or via Gantimpala Theater Foundation 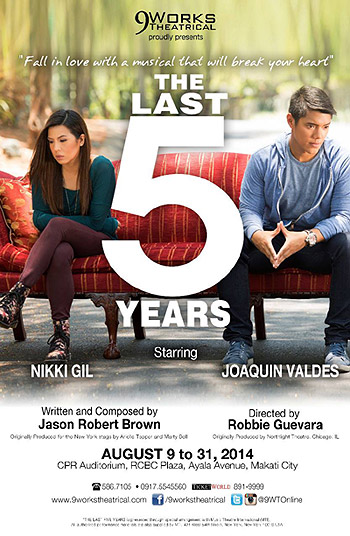 Cast: Nikki Gil as Cathy and Joaquin Valdes as Jamie

Synopsis: This contemporary musical chronicles the five-year cycle of a marriage from meeting to breakup, or backwards from breakup to meeting, depending on how the audience looks at it. Heartbreaking synopsis aside, you may fall in love with the songs that are catchy enough to become radio ballads. 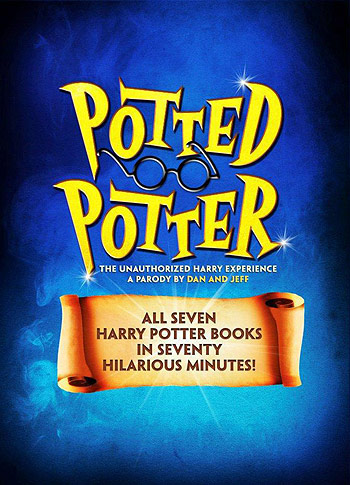 When: September 30 to October 5

Synopsis: A parody that's worth a golden snitch, Potted Potter pokes fun at the wizarding world of Harry Potter. Not to be confused with Darren Criss' A Very Potter Musical, also an unofficial parody, Potted Potter is a two-muggle show that spoofs as many Harry Potter characters and scenes as possible in one hilarious night-off-key musical scores included. Here's a tip: sit in the front section and raise your hand when they break the fourth wall-you could just win a chocolate frog!

Plays Manilatheater Whattowatch
Your Guide to Thriving in This Strange New World
Staying
In? What to watch, what to eat, and where to shop from home
OR
Heading
Out? What you need to know to stay safe when heading out