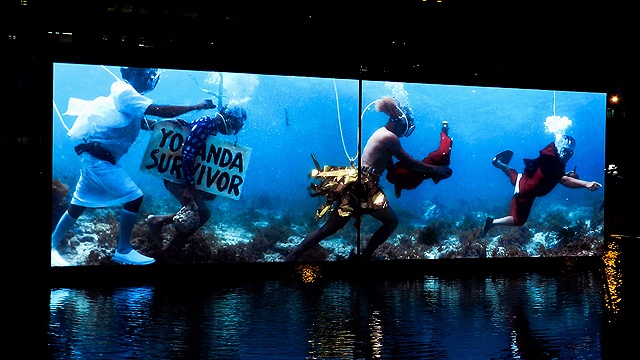 This Video Installation at the Makati Stock Exchange Hypnotizes Passers-by 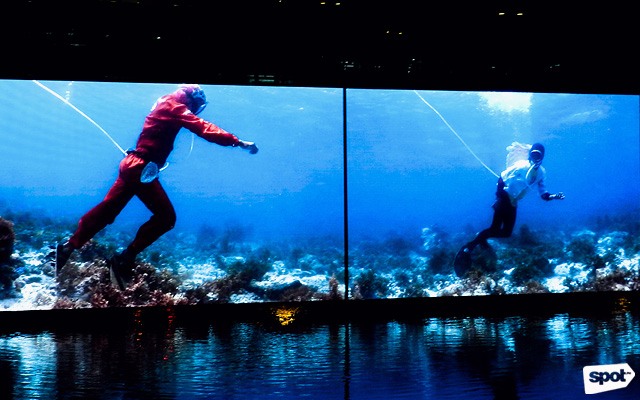 (SPOT.ph) Makati City comes alive with art once again through art as sculptures and installations take over its busy streets and corporate buildings through Art Fair Philippines' public art initiative called 10 Days of Art, running from February 23 to March 4, 2018.

One of the featured pieces is Martha Atienza’s video titled "Our Islands 11°16’58.4”N 123°45’07.0”E," which you can find by the fountain area of the Makati Stock Exchange building. The setting perfectly complements the underwater scene that features images of men wearing DIY diving gear as they tread water in what looks like a barren part of the sea. The same video by the Dutch-Filipino artist was awarded the Baloise Art Prize at the Art Basel 2017 in Switzerland, and was widely praised by the international art scene.

Atienza’s interest in filming the sea is deeply rooted in her years growing up in Bantayan Island in Cebu. To add to this, she came from a family of mariners: Her grandfather was a lighthouse keeper, her father was a sea captain, her mother worked for the shipping company called Holland America Line, and her brother works as a seafarer. After following and filming seafarers on ships, she came home to the island with the desire to do something about pressing issues facing the community, such as the diminishing marine life affecting the livelihood of the Bantayan’s residents. “When I went back to Bantayan, I realized that my neighbors were also fishermen and they deserve to be filmed and to show what they do at sea. That's when I realized that video images can start a dialogue,” she explains in an interview with SPOT.ph.

Since 2010, Atienza has worked extensively with the locals through several community projects, especially after the island was heavily hit by Typhoon Yolanda in 2013. She uses art as a way to engage people and encourage them to participate, such as the art-driven youth group called Atonisla and livelihood-driven community called Para sa Aton. 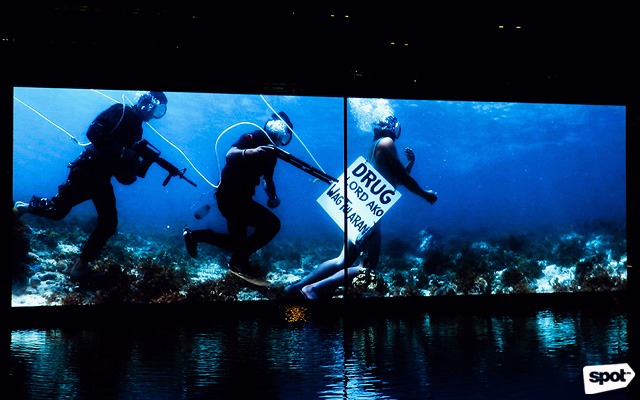 Atienza admits that while the technical aspects of filming "Our Islands" was a challenge, it was nothing compared to the amount of time her team spent discussing the costumes and characters chosen by the divers themselves. The fishermen also played a big part in choosing the location of the film, especially the areas which have endured the most damage.

Her video installation is perhaps also an underwater take on Atienza’s Anito series, where she would film men in costumes, some of them impersonating celebrities and politicians as they form a procession reminiscent of the Ati-Atihan (a festival honoring the infant Jesus).

In "Our Islands," the same clever characters are shown, such as a man impersonating a boxer and throwing perfect jabs into the water. The overseas Filipino worker is also represented in the form of a man pulling his luggage, along with another wearing an orange jumpsuit similar to a seafarer’s uniform. Current and past national issues are also apparent in her work, with images of a man with a piece of cardboard that says “Yolanda Survivor” and another character with a sign that says “Drug Lord Ako, Wag Tularan” followed by men holding guns.

The scenes don’t have sound and the men sway without bumping into one other, evoking a hypnotic sensation. The lulling monotony allows the audience to focus on every detail of the video: the costumes, the dying reefs, and the light of the sun passing through water. It lets viewers swim in questions lingering in their heads. 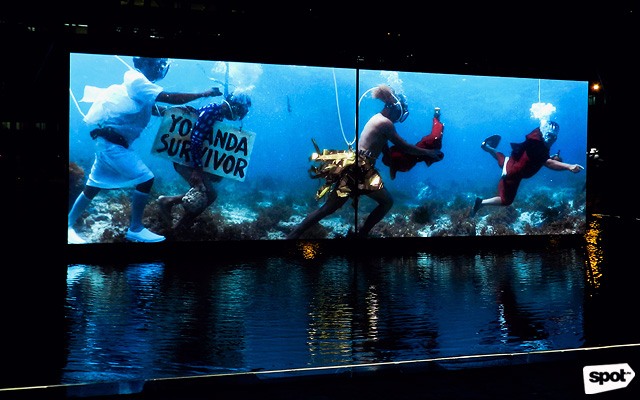 The People and the Island

Atienza is known for works that require patience among viewers. Their pacing is often slow and they do not omit any detail. The style parallels the larger task that she and the people of Bantayan have undertaken—continuous rehabilitation efforts for affected areas of the typhoon, empowering the locals through sustainable livelihoods, and raising awareness about their rights.

“I wish I could tell you that was all successful and we're doing great but the reality is that it is really hard," she shares. "And I really want to talk about all these mistakes [in implementation of projects]. I don't want to pretend that we're solving all the problems. I wish, [but] I'm really feeling desperate now that's why I want people to watch.”

Atienza says she wants to really think about the next step. To make sure that when NGOs like Tambuyog leave, her community can take ownership of their livelihood and continue the work they have started. “We think long-term and doing it properly. I still have a lot to learn. I'm not a social worker, not a community organizer. I also have to be honest about it that, you know, that I'm really good at this thing (art) but I need to work with other people. I need to team up,” she confesses.

And so, through her art, Atienza has faith that people will pay attention to these concerns. “This is going to give us a voice. And it's going to enable us to work on this forever, I hope.” She understands the reality that trying to make things better can be a slow, harsh process towards a lifetime commitment. To this, Atienza smiles and says, “We’re ready.”