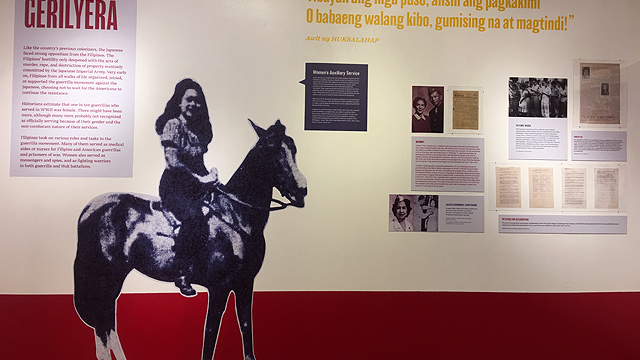 It focuses on the untold stories of Filipinas during World War II and beyond.

(SPOT.ph) In a time when there are conscious attempts to suppress women’s rights through sexist remarks, Ayala Museum’s exhibit titled Women and War serves as a reminder of the sufferings, sacrifices, and contributions of Filipino women during one of the darkest periods in history—World War II. The show, which is presented by the Filipinas Heritage Library, runs until March 3 and admission is free.

Women and War features members of the group LILA Pilipina, an organization of survivors of Japanese military sexual slavery during World War II and advocates of justice for all women victims of continuing foreign military sexual violence. LILA is short for Liga para sa Lolang Pilipina, members of which were forced to become comfort women for Japanese soldiers. It was in 1992 when the Task Force on Filipino Comfort Women was founded by seven womens' organizations, including LILA Pilipina. More than a decade since, the fight for justice continues, and this exhibit hopes to tell the often-untold stories of Filipinas throughout the war and even beyond.

The show is curated in a way that it shows the many portrayals of women and how their roles in the society changed before, during, and after the Japanese occupation. The space is divided into five overarching narratives: Manunulat, Gerilyera, Sibilyan, Obrera, and Mga Lola.

It also displays photographs of known Filipino women—writers, guerillas, farmers, nurses, social workers, and civilians—accompanied with a short biography narrating their struggles during wartime. The striking visuals are also supported by historical accounts, video installations, interviews, texts, and personal items of the victims.

The powerful video installation "Song of the Malaya Lolas" features the abused women in Mapanique, Candaba, Pampanga during a mass rape by the Japanese troops. In the video, the grandmothers are retelling their horrific experience through a song, which sound like a poignant plea echoing all throughout the gallery.

Another empowering installation is the portrait of Maria Rosa Henson, more commonly known as Nana Rosa, with a protest banner above it. A war victim herself, she wrote "Comfort Woman: Slave of Destiny," which is the only autobiography of comfort women in Asia. The compelling protest banner by groups LILA Pilipina and Gabriella tells viewers that the fight against an abusive government continues for all Filipino women.

Art Exhibit Ayala Museum Makati
Your Guide to Thriving in This Strange New World
Staying
In? What to watch, what to eat, and where to shop from home
OR
Heading
Out? What you need to know to stay safe when heading out