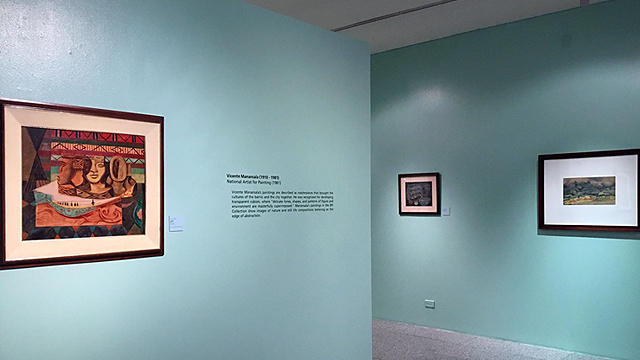 Rare Exhibit in Makati Puts the Spotlight on 14 National Artists

(SPOT.ph) "Not all Filipinos are national artists," clarifies Ken Esguerra, Ayala Museum's senior curator and conservation head, about a "common mistake among writers" who think that all Filipinos automatically earn this label. The Order of the National Artists of the Philippines is a distinction given to Filipinos who made significant contributions to the development of Philippine art, he explained. It was first awarded to Filipino painter Fernando Amorsolo in 1972 through a proclamation by former dictator Ferdinand Marcos. Almost five decades later, the Philippines now has a total of 17 National Artists for Visual Arts and 14 of them are showcasing their works in the exhibit Images of Nation at the Ayala Museum in Makati City. The show runs from February 12 to May 19.

Images of Nation, which is curated by Esguerra, is part of BPI Foundation's initiative to share to the public its massive collection of about 1,000 art pieces that range from 18th-century prints to 21st-century paintings. "Our intent is to share art and democratize it; and help preserve it and promote it—not only for this generation but for the generations to come," Maricris San Diego, BPI Foundation’s Executive Director, says about their arts and culture program. In 2018, the financial institution collaborated with the Ayala Museum for a two-part exhibit called the OBRA Art Series, which included Pagpugay (from March 6 to 25, 2018) and Historia (from June 18 to August 12, 2018). These shows focused on the Filipino values of family and community and on patriotism and Philippine history, respectively.

"There's so much of the National Artists in their collection and that's really something to admire," says Mariles Gustilo, Ayala Museum Director. Not included in the foundation’s repository are works by Guillermo E. Tolentino (1973), Francisco Coching (2014), and Larry Alcala (2018).

"We hope that by doing this, the objective is to promote and inspire especially our young students. The educational system has gone so complex that not many of them get exposed to arts and culture as they should,” Gustilo continues.

Ayala Museum Makati Art
Your Guide to Thriving in This Strange New World
Staying
In? What to watch, what to eat, and where to shop from home
OR
Heading
Out? What you need to know to stay safe when heading out