This Deutscher Werkbund Exhibit at the Met Museum Showcases the Best of Modern German Design
Loading
Already a member? Log in
No account yet? Create Account
Spot.ph is your one-stop urban lifestyle guide to the best of Manila. 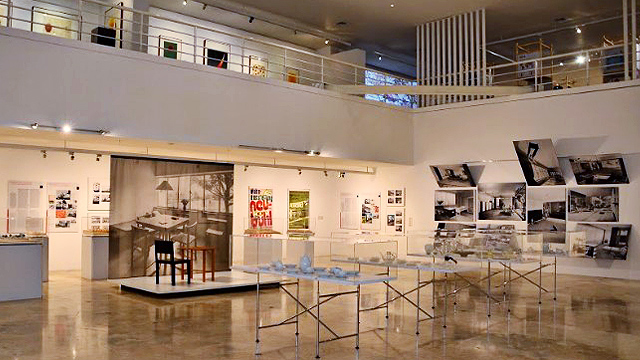 This Exhibit at The Met Proves That Good Design Is Timeless

Deutscher Werkbund showcases the works of German designers, be it in branding, architecture, and more.

(SPOT.ph) Good design plays a big role in our lives—from the houses that we live in to the plates that we serve our food on. Modern design is generally considered good design, as it focuses on function over form, simplifying each product's use.

You could say that modern design has changed the way we live today. But you may wonder: Where did it all start? It all began in 1907 in Germany, with a group of architects, designers, and artists who wanted to create simple, modern, and efficient design for everyone. This association is called the Deutscher Werkbund, and their works are showcased in “100 Years Deutscher Werkbund: Architecture and Design in Germany” at the Metropolitan Museum of Manila. The exhibit runs until May 25, and entrance fee is at P100.

In a tour of the exhibit, its designer Beate Rosalie Schmidt explained the democratic, “good design for all” vision of Werkbund: “It’s an association of architects, designers, companies, and also artists and teachers, and they want to design all things—everything, from the sofa cushions to the city buildings. And they didn’t want to design from the upper class, they wanted to design for all people.”

Some of Werkbund’s more famous members are the iconic architects Walter Gropius, Ludwig Mies van der Rohe, Le Corbusier, and Henry Van de Velde. Many of their designs under Werkbund paved the way for modern design as we see it today. Here are some of the groundbreaking works you could see at the exhibit:

Prior to the 20th century, there was no such thing as product ID, branding, or even logos. All this changed with the advent of Werkbund, whose artists introduced modern graphics that were unique to each brand or product. They were also the first to add logos to posters, notepads, coffee cups, and saucers to use as marketing tools.

The rise of the Industrial age in Germany meant that they needed more houses. “They needed a lot of living space, because a lot of people in Berlin had to get into the city to work,” explains Schmidt. Van der Rohe introduced mass housing prototypes in an international exhibition of the Werkbund in 1927. The aim was to create beautiful, efficient, and comfortable homes for everyone, regardless of social status.

Modern and streamlined houses as early as the 1920s

These sleek, clean-lined houses were designed to simplify living and housekeeping, and introduced International Style to the world. The look of the houses is so future-forward, that you can just replace the vintage car in the photo with a brand-new model and it will look like a house from the 2000s.

In case you were wondering about the origins of the white, minimalist houseware trend, here's your answer. The Werkbund introduced pure, zero-ornamentation, reduced-to-the-bare-minimum cups, saucers, jugs, teapots, and plates in the early part of the 20th century. This came as a shock to a public that was still using ornate, 19th-century dinnerware. These pieces were introduced as democratic objects that could be mass produced, and would stand the test of time—you could still purchase these dinnerware lines almost a hundred years later.

An exhibit of interiors in 1930 that still looks current

Minimalist, almost-empty spaces, streamlined furniture in steel and leather, floor-to-ceiling windows, sinewy overhead lamps to provide indirect lighting—these may be the interior design trends of today, but all of these details were introduced by the Werkbund in their interior design work exhibited at the Paris Exposition almost 90 years ago. These interiors can be transported into a modern, high-rise pad today!

Furniture pieces that are timeless classics

The Werkbund was the first to standardize furniture design and manufacturing for mass-production, ensuring that the next German citizen would get a chair of the same quality and durability as the last one. The designers and architects also wanted to make furniture that would match the modernity of the structures that they created. Schmidt relates that sometimes students would make a mistake in the chronological arrangement of these famous chairs; proof that each one is timeless (every chair here can still be purchased until now).

To ensure that the next generation understands good design, Werkbund made a “Werkbund Crate” of Hermann Gretsch’s minimalist collection of dinnerware and flatware to distribute at schools. The grade school-age children were then encouraged to touch and use the objects to appreciate its forms and simplicity, making them understand what good design was like.

100 Years Deutscher Werkbund runs until May 25 at the Metropolitan Museum at the BSP Complex, Roxas Boulevard, Malate, Manila. It is open from 10 a.m. to 5:30 p.m., Monday to Saturday. Entrance fee is P100.