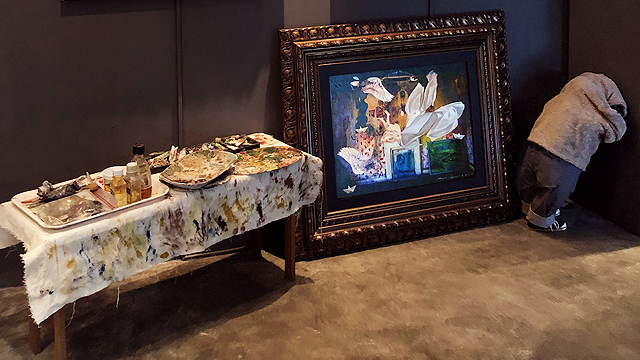 This Haunting Exhibit Takes Place Inside an Artist's Studio

(SPOT.ph) Artist studios are often off-limits to the public. Some artists prefer to keep works-in-progress a secret before the big reveal come exhibition day. Others hope to make the behind-the-scenes their private sanctuary. But one of the few times that we have the opportunity to access such exclusive spaces is through Maxine Syjuco’s latest solo exhibition, My Inner Sanctum, which runs until September 15 at Art Lab in Muntinlupa City.

Established by Syjuco’s parents, award-winning artists Cesare and Jean Marie, Art Lab functions as a combined atelier and exhibition space used by all the members of the family to house their diverse artistic practices. My Inner Sanctum is staged inside her quaint but homey studio, which is located just right across the residence pool where a large signage with the word “PERFECTIOM” humors visitors.

Syjuco’s space is filled with books, art materials, photographs, and vinyl records. Random objects are found in every corner: a Tibetan mask, a Mexican doll from the Día de Los Muertos, and a shark’s head. During the summer season, the dim studio transforms into a child-friendly place where the artist holds her painting and drawing classes for children. She loves how her studio can be an ever-evolving space that affects the audience’s reception of her works, placed away from the intimidating atmosphere usually perceived at commercial galleries.

It was in 2018 when Syjuco first opened the doors of her studio to the public for a solo exhibition titled Burning in Water, Drowning in Flame. But My Inner Sanctum is different. Unlike the previous show, works-in-progress are placed side-by-side with finished paintings. She wants viewers to experience the same journey of creation that she's undertaken. "Every time you visit, there’s something new, something finished, something unfinished," she tells SPOT.ph.

Syjuco’s works, which range from figuration to goth surrealism, seem to whisk the audience away to dreamland. What looks like faceless children with holes in their chests, their hearts taken from their bodies, are present in almost every canvas, showing an intersection of reality and the dark realm (which is probably not that different nowadays). She explains that she uses a lot of symbolism in the images she paints. Heavily influenced by literature, particularly poetry, one of the paintings in the show is aptly titled, "I Think I’ll Pick the Bleeding Hearts Myself, She Said," which is a reference to the first line of Mrs. Dalloway by Virginia Woolf.

Exploring themes that highlight the understanding of the human condition, Syjuco favors illustrating children wearing transparent and laced dresses. Their heads are replaced by wings in bold dabs of white as they stand against a background where depth and perspective reflect the influence of surrealism. She explains that children have a certain spiritual energy that we tend to lose as adults: a sense of innocence and hope to find beauty amid darkness.

Through the enigmatic themes and disturbing images and forms in her works, she wants us to regain that childlike innocence that we forget through time. My Inner Sanctum wants us to pause for a while and take a closer look at the life we live and even that of others. In welcoming us into her studio, into the privacy of her family’s home, we crawl into an unfamiliar space and understand more about ourselves from another person’s private space. How we can be critical of the show, the paintings, and the artist is merely a jump-off point towards our own conclusions on our own inner sanctums.

All photos courtesy of Maxine Syjuco

Maxine Syjuco Art Lab Muntinlupa City Art Exhibit
Your Guide to Thriving in This Strange New World
Staying
In? What to watch, what to eat, and where to shop from home
OR
Heading
Out? What you need to know to stay safe when heading out