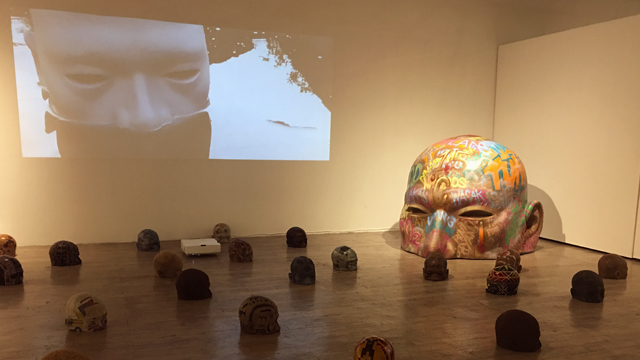 Ninety Head Sculptures Open Our Eyes About an Imagined Future

Is this where we're headed?

(SPOT.ph) Many dystopian and utopian movies have predicted the future for us: robots, flying cars, and teleportation. But have you imagined what it would be like for us humans? Artist Vincent Padilla presents sentinel figures that have a semblance to ancient monuments to speculate on the possibility of a future determined by the consequences of our own actions. Originally displayed as five-feet sculptures at a park facing the Manila Cathedral in Intramuros, the works for Romancing the Inevitable find a new home at Art Cube Gallery in Makati City. The exhibit runs until October 31.

The most notable among Padilla’s sculptures are two gigantic heads from his "Nalubos Monumental Series," which were made from biodegradable resin. Both are placed on opposite ends of the room, as if gazing at each other—one designed with graffitti using spray paint while the other created with snack wrappers. The monumental heads—as what the size and title suggest—create conflicting impressions of grandeur and anxiety.

Surrounding these massive sculptures are smaller head pieces from the "Nalubos Series." Designed with acrylic, lace, newspaper, and sawdust, they highlight various designs inspired by indigenous patterns in the Philippines. The heads are scattered around the room in such a way that viewers can gaze at each piece (and seem to be gazed upon as well).

The exhibit also features a video installation where half of a head piece creepily floats on a body of water while drawing reactions from passersby on a boat. Appearing to be half-submerged, Padilla explores a different surface where his artwork can float and flow while speculating on its other possibilities in a different site and setting.

Romancing the Inevitable does not only examine the possibilities that the future will bring, but it also prompts the viewers to reflect on one’s self. In reality, these sculptures could be us in the future: "expired, depleted, nalubos," as what the show’s exhibit notes suggest.