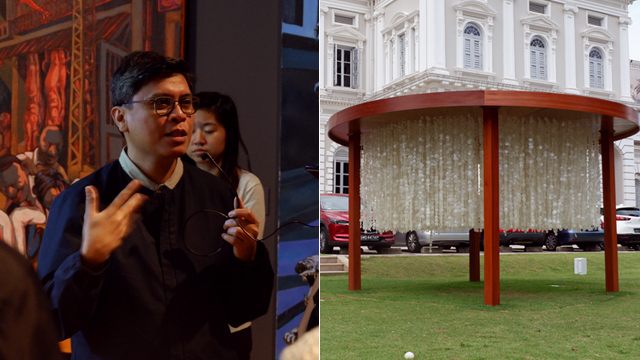 Plus, there are more than a handful of artists from the Philippines.

(SPOT.ph) Art Stage Singapore, considered as the Lion City's main art fair, was cancelled just a week before opening in January 2019 due to logistics issues. Singapore Biennale in 2017, on the other hand, was riddled with controversy, including a blood oath taken by Singaporean artist S. Chandrasekaran after his show was relegated to a static display rather than what was intended to be a performance piece. Suffice to say, people are on the edge of their seats as they await the opening of the next international art fair in the country: Singapore Biennale 2019, which runs until March 22, 2020 in 11 venues across the city. Filipino art historian and curator Dr. Patrick Flores lead this year's event, which is aptly titled Every Step in the Right Direction.

“Every Step in the Right Direction, therefore, becomes an invitation as well as an inspiration for us to decide on which steps to take towards what we believe is the right direction,” Flores shares during the Biennale’s opening on November 22. He worked with six other curators including Sultan Kudarat-born Renan Laru-an.

Though this cements the big Filipino contingent at the international fair, Flores clarifies that the roster of Filipino artists "are here not to represent identity, but to create more performative conditions for the audience to think through and act on their subjectivity. Identity tends to capture; [he] wants works that release it from prefabricated ideologies."

Flores also echoes the sentiments of 1930s revolutionary and feminist Salud Algabre who once said, “No uprising fails, each one is a step in the right direction.” The right direction, for him, is beyond binaries like right and wrong or black and white. “I wanted this biennale to prepare the body of the agent and the mind to make certain decisions about what is ‘right’,” he says. The right direction is—and will always be—an ethical decision.

Aspiring to “make a difference in the troubled world,” he engages the public through the Singapore Biennale through thought-provoking pieces that require the viewer to make a dialogue both with the work of art and with himself.

He admits that he often gets asked what the biennale is about but says this is not the most productive question to ask him. “Instead, it offers a method and an argument about how to be present in the world and to index that presence with persistent and decisive action.”

Flores finally emphasized their gesture of reworking the world through art; that the biennale aims to convey the sensibility of delicacy and urgency, but at the same time recognize one’s morality. Hopefully, this step in the right direction is enough to make this year's edition of the Singapore Biennale the game-changer that it wants to be.

Erratum (December 5): The original version of this article said that Gary-Ross Pastrana's "Properties" were created for a 1998 staging of the play Cleansed in Manila. The article has been corrected.