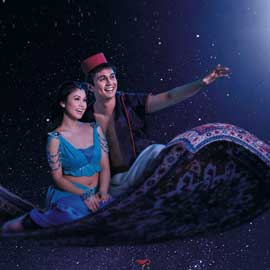 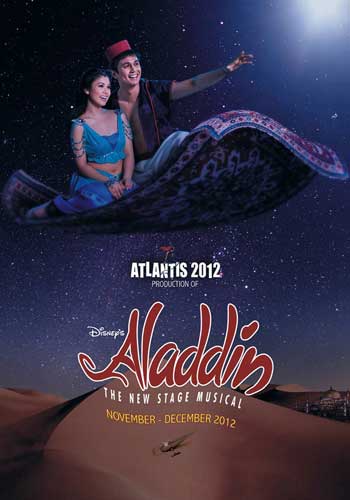 (SPOT.ph) How does one transform a magical Disney animated film to a live theater performance on the Philippine stage? I must admit my expectations were not high. But with a wonderful book based on the Disney film by Chad Beguelin, music and lyrics by the original team of Alan Menken, Howard Ashman, and Tim Rice, with Beguelin, plus directors Bobby Garcia and Chari Arespacochaga who consistently turn out hits, a live orchestra conducted by Ceejay Javier, great casting, and a caravan of creativity, my skepticism soon disappeared into thin air.

I took 69-year-old Mom; Tita Merce, a retired U.S. professor of dance who turns 80 in January; and Ina, barely a teen, a freshman at Philippine Science High School, to the show. Mom is usually easy to please; the other two, usually not.  They all enjoyed the show. I did, too.

I checked in with the parents of five-year-olds Sydney and Luca who were at the same show, and they said their children stayed wide awake, well-behaved, and enthralled throughout the performance.

After Atlantis Productions' well-received productions of Disney's Beauty and Beast in 2005, and The Little Mermaid last year, the company was chosen by Disney Theatricals to stage Aladdin's Asian premiere.

The show opened with street troubadours/narrators/Greek chorus Babkak (Bibo Reyes), Omar (Johann dela Fuente), and Kassim (Jamie Wilson), riding makeshift camels that reminded me of the homemade toys of my childhood. But what the production lacked in its budget for props was made up for by the actors' comedic timing that kept the audience in stitches throughout the show.  The trio was hilarious, eliciting guffaws even from the stern-looking grandfathers in the audience. Even funnier was the star of the show, the Genie (Aiza Seguerra, who alternates with Calvin Millado). We caught the show with Aiza, and though she was as tiny as the original animated blue character was large, her giant personality filled up the large stage, as sparkling as the glittering mosaic set designed by Lex Marcos and Lawyn Cruz.

Shirtless heartthrob Tom Rodriguez tickled the imaginations of giggly teenagers as the scoundrel Aladdin, and we contributed to the audience's collective gasp as he wooed the headstrong Princess Jasmine (K-La Rivera) with that magical carpet ride. And while neither K-La's pretty voice, nor any other theater royal for that matter, could ever match the pure dulcet tones of the original film's princess Lea Salonga, K-La's pretty, wide-eyed wonderment was charming, winning over the audience as she and Aladdin soared through that endless diamond sky.

We reveled in the pomp and circumstance at the Sultan's palace and shuddered at the evil oozing from Jafar (Raul Montesa) and his sidekick Iago (Jimmy Marquez, no longer a parrot, as in the original film). The exuberant production number choreographed by Cecile Martinez that ended Act One, had my dance professor aunt cheering and applauding.

For just over two hours, we allowed our imaginations to fly with Aladdin and his princess.  What a treat for the holidays.

Aladdin plays through December 9 at the Meralco Theater.

K-larivera Aizaseguerra Aladdin Theater
Your Guide to Thriving in This Strange New World
Staying
In? What to watch, what to eat, and where to shop from home
OR
Heading
Out? What you need to know to stay safe when heading out