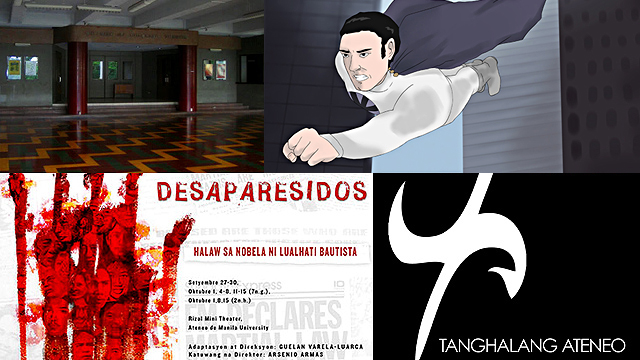 Up to the next! 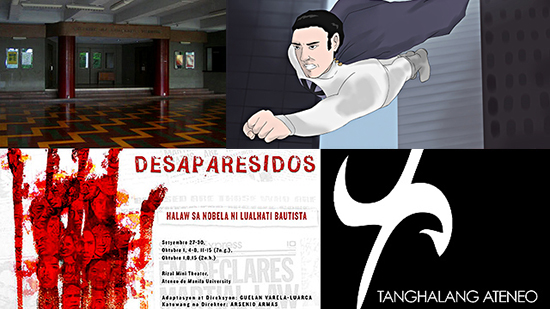 (SPOT.ph) Katipunan Avenue in Quezon City is straddled by two academic institutions—Ateneo de Manila University and University of the Philippines-Diliman. As both have theater arts programs and a number of theater groups under their roofs, it’s no longer a surprise that the calendar for the whole school year is filled with performances by young thespians.

Here are 10 plays that are scheduled from September 2016 to May 2017. They’re definitely worth the traffic! 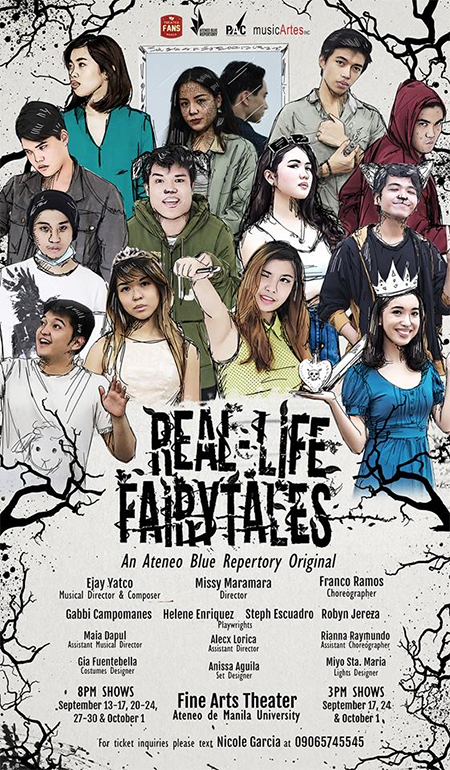 Blue Repertory, Ateneo de Manila's musical theater organization, stages an original production titled Real-Life Fairytales for its season premiere. Composed of various vignettes, it alternates between the search of fantasy in reality and reality in fantasy. "How much of life is real and how much is just a fairytale?," it asks. The show is directed by Missy Maramara, with music by Ejay Yatco. 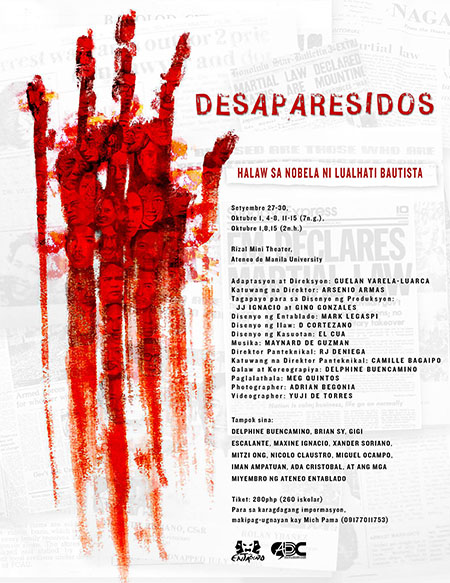 For its first show for the season, socio-political theater company Ateneo ENTABLADO (ENterteynment para sa Tao, Bayan, LAnsangan, at DiyOs) presents Desaparesidos, which is based on the novel of the same title by Lualhati Bautista. "Desaparecidos" is a term associated with the act of forced disappearance of victims of political or social terror. It was a case often seen during the Martial Law era under former President Ferdinand Marcos. The Ateneo production is written and directed by Palanca award-winning playwright Guelan Varela-Luarca. 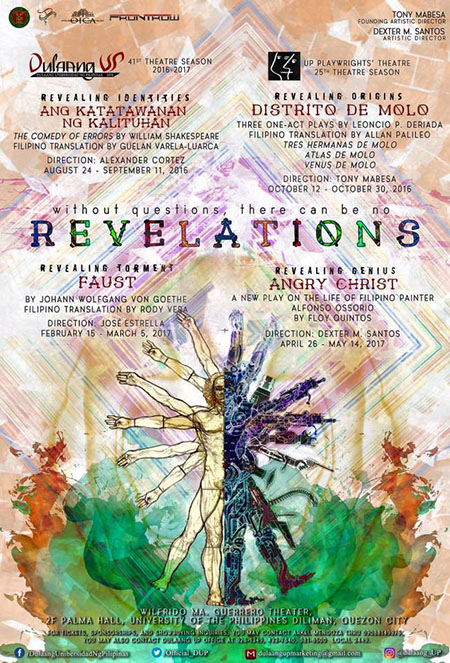 Distrito de Molo, a production by the UP Playwrights' Theatre, is a collection of three one-act plays (Tres Hermanas de Molo, Atlas de Molo, and Venus de Molo) by Gawad sa CCP para sa Sining recipient Leoncio P. Deriada. These have been translated into Filipino by Allan Palileo. Each play, set in a different timeline but all situated in Molo in Iloilo City, narrates the various history and mythology that revolve around the revered district. It is directed by Tony Mabesa. 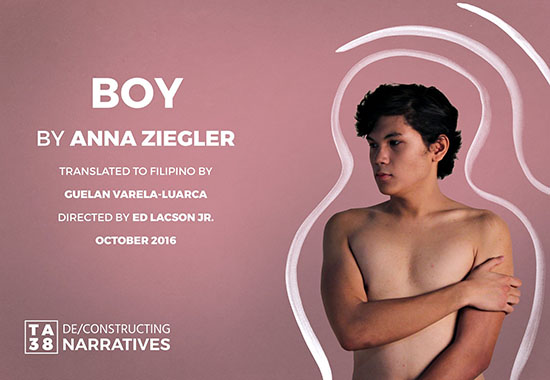 Boy, Tanghalang Ateneo's maiden production for the season, is a brand new play written by American playwright Anna Ziegler. It is based on a true story about a boy in the 1960s who was raised as a girl by her parents after a terrible accident. He later tries to find love amidst the confusion. The Ateneo production, directed by Ed Lacson, Jr., is the play's first international staging and uses a Filipino translation by Guelan Varela-Luerca.

For ticket inquiries, contact Camille Abaya at 0915-835-9210 or purchase through Ticketworld. 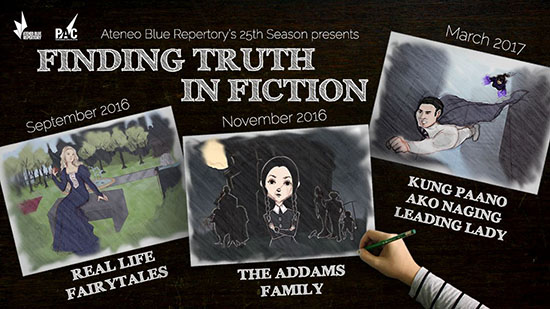 Blue Repertory's retelling of the story originally written by Marshall Brickman and Rick Elice zooms in on Wednesday Addams who has grown up and fallen in love with a smart young man from a respectable family. She confides in her father, Gomez, and begs him not to tell her mother. Things change for the family when they host a dinner for Wednesday's future "normal" in-laws. 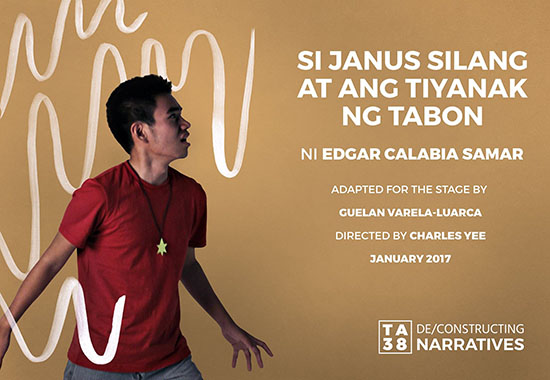 Edgar Calabia Samar's popular young adult novel, Si Janus Silang at ang Tiyanak ng Tabon, is brought to life through a theatrical adaptation by Tanghalang Ateneo. It follows the titular character, Janus Silang, who is fond of playing the online game TALA (Terra Anima Legion of Anitos) Online. Unknown to him, this world of anitos, tiyanak, and manananggal goes beyond the Internet and leads to a parallel universe. Charles Yee directs this production.

Johann Wolfgang Von Goethe's Faust is translated to Filipino by Rody Vera in this Dulaang Unibersad ng Pilipinas production. It is directed by Jose Estrella. This two-part tragic play follows Mephistopheles who challenges God and claims that he can easily lure Faust away from righteousness. 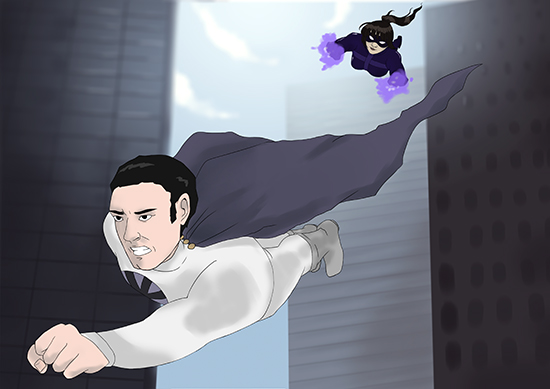 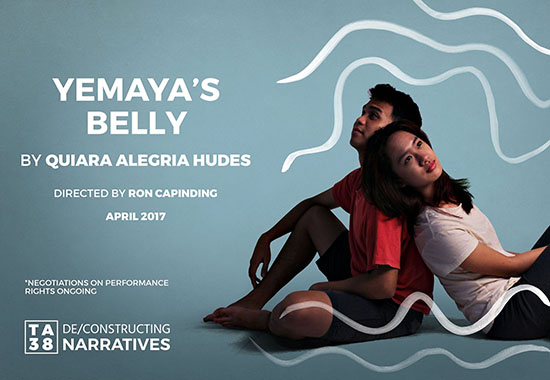 Yemaya's Belly, written by Pulitzer Prize winner Quira Alegria Hudes, is set in a small town in Cuba and follows a little boy who is eager to learn about the world around him. When a disaster strikes his town, he tries his best to get out of the desperate village through the help of a young girl he just met. Directed by Ron Capinding, this Tanghalang Ateneo play interweaves magic realism, folk culture, and real events.

UP Playwrights' Theatre's Angry Christ is a new work by esteemed playwright Floy Quintos. It follows the journey of Filipino painter Alfonso Ossorio, popular for his mural of a fiery Christ on the walls of St. Joseph the Worker Parish Church in Victorias, Negros Occidental. The disturbing altar piece caused a scandal when it was unveiled in the 1950s. Angry Christ is under the direction of Dexter M. Santos.