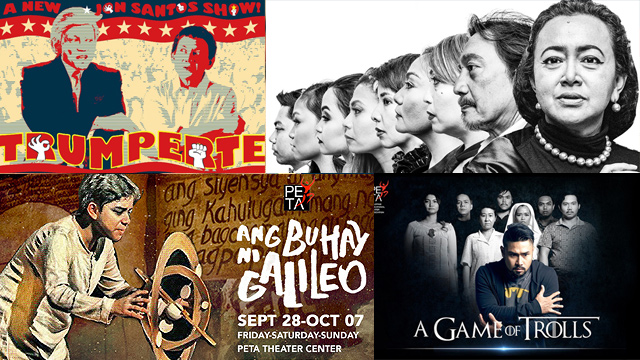 We need it now more than ever.

(SPOT.ph) Theater in the Philippines has always been a direct commentary on what's happening around us, as art should be. The sarsuwela, which was influenced by the Spanish zarzuela, was our attempt to preserve our own culture during colonial times. The form dula-tula was first introduced during Martial Law when writers used the power of the pen to protest the atrocities of the Marcos administration. This theater season, Philippine Educational Theater Association celebrates its 51st year with a lineup of protest plays and #woke narratives. The theater group's Stage of the Nation creative campaign runs from September 2018 to June 2019.

"A lot of the chosen productions will talk about the themes of truth, historical revisionism, human rights and EJK, martial law, the elections and people’s participation," Philippine Educational Theater Association's (PETA) artistic director Maribel Legarda told the press. Some of the politically charged and socially relevant productions included are:

The Filipino translation of Bertolt Brecht's Life of Galileo was first staged in 1981 at the Rajah Sulayman Theater in Fort Santiago, then again in 2017 as part of the theater company's 50th anniversary. It follows the story of Galileo Galilei, who was thought to be a heretic by the Roman Catholic Church because of his discoveries about the universe.

A Game of Trolls is written by Liza Magtoto and directed by Maribel Legarda, the same tandem that produced Rak of Aegis. It follows Hector, an online troll and manager of a "call center" that runs a pro-Martial Law campaign through the Internet. Because he doesn't have his own stand on the issue, it's easy for him to heckle anyone who says the opposite of what he's posting online. He later encounters the ghosts of Martial Law victims, forcing him to reflect on his beliefs. A Game of Trolls was first staged in September 2017.

Legendary comedian Jon Santos portrays today's political climate through an original satirical live show titled Trumperte. Expect to see the Philippines' top political impersonator do hilarious impressions of Donald Trump and Rodrigo Duterte, all in one night. Trumperte, which was first presented on September 22 at Teatrino in Greenhills, is directed by Michael Williams.

Unlike the rest of the productions, Charot is PETA's newest piece for the first half of 2019. It is a satirical play about current events and their possible consequences on the future. The theater company describes it as a showcase of how ridiculous we have allowed our country to be.

First staged in April at the University of the Philippines by UP Playwrights Theater, The Kundiman Party shows how art can start a revolution. It follows retired singer Maestra Adela Dolores—who believes in the transformative power of the kundiman—and young tech-savvy activist Bobby in an eccentric form of protest.

Other events for the season include the launch of Buklod, an album by Noel Cabangon, Romeo Donget, and Rene Boncocan that features protest songs popular in the 1980s and early 1990s; a community-building program that focuses on urban poor communities that were affected by the government’s so-called "war on drugs;" and the Human Rights Film Festival in March 2019, which is a series of film screenings every Wednesday at the PETA Roofdeck.

Quezon City Theater Philippine Educational Theater Association Peta
Your Guide to Thriving in This Strange New World
Staying
In? What to watch, what to eat, and where to shop from home
OR
Heading
Out? What you need to know to stay safe when heading out