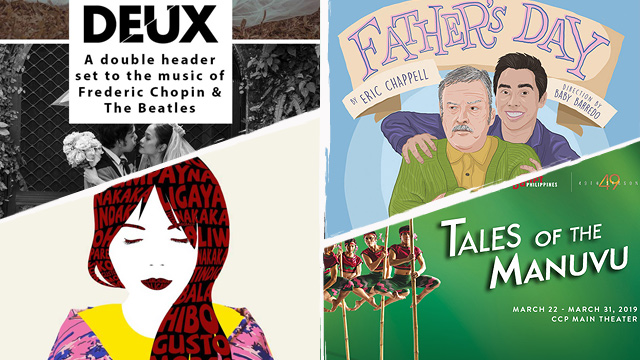 Theater in Manila: Exciting Shows to See Onstage This March

From a Harry Potter parody to an Eraserheads-inspired musical.

(SPOT.ph) February was such a great month for Philippine theater that our lineup of shows to watch went up to 12 plays and musicals. Most of them are still onstage, by the way—including Eto Na! Musikal nAPO!, Charot!, Miong, Nana Rosa, Every Brilliant Thing, and The Phantom of the Opera. But if you're ready for another set of exciting stories, here's your guide for what to see in March.

Ang Huling El Bimbo, which—despite not being your usual musical—enjoyed more than a handful of sold-out shows in July, returns to the stage this year with a couple of surprises. First, renowned writer-director Floy Quintos joins the creative team as a dramaturg to tighten the musical's narrative. Second, new members are sharing the limelight with the old cast: Gab Pangilinan as young Joy, Carla Guevara Laforteza as old Joy, Phi Palmos and Lance Reblando as young Anthony, Rafa Siguion-Reyna as old Anthony, David Ezra as old Hector, Nicco Manalo as young Emman, and Myke Salomon as old Emman. Reprising their roles are: Tanya Manalang, Menchu Lauchengco-Yulo, Reb Atadero, Bibo Reyes, Gian Magdangal, Jon Santos, Boo Gabunada, and OJ Mariano. Ang Huling El Bimbo, which is set in the '90s, tells the story of three friends as they reflect on their college days while singing and dancing to the songs of the Eraserheads.

Fan of Harry Potter? Well, Potted Potter is unlike any J.K. Rowling book or movie you've ever read or seen. This two-person theatrical parody by British playwrights Daniel Clarkson and Jefferson Turner condenses the seven-novel series into 70 LOL-worthy minutes. Expect to see ridiculous props, songs with a lot of puns and Harry Potter references, endless costume changes, and orange wigs. It's the "Unauthorized Harry Experience," after all.

See two cool ballet routines in one show through Deux, which is the French word for the number two. The double header features Les Sylphides, a dreamy, romantic ballet set to the music of Frederic Chopin; and The Winding Road, an original ballet by Martin Lawrance set to the music of The Beatles. How's that for an afternoon (or evening) of classical-meets-rock?

The show runs from March 9 to 10 at Aliw Theater, Cultural Center of the Philippines Complex, Vicente Sotto Street, Pasay City. Tickets, priced from P500 to P1,500, are available through Ticketworld.

A 1977 original by National Artist for Dance Alice Reyes (for choreography and direction) and National Artist for Literature Bienvenido Lumbera (for script and lyrics), Tales of the Manuvu retells the origin story of the Manobo tribe of Central Mindanao. This rock opera ballet will bring to the stage Celeste Legaspi and Ding Mercado, who were part of the original run. Singers Aicelle Santos, Shiela Valderama, Lorenz Martinez, Nar Cabico, Reuben Laurente, Poppert Bernadas, and Lara Maigue are also joining the cast.

The show runs from March 22 to 31 at Tanghalang Nicanor Abelardo, Cultural Center of the Philippines, Roxas Boulevard, Pasay City. Tickets, priced from P300 to P3,000, are available through Ticketworld.

The show runs from March 8 to 10 at Tanghalang Nicanor Abelardo, Cultural Center of the Philippines, Roxas Boulevard, Pasay City. Tickets, priced from P900 to P3,500, are available through Ticketworld.

Father's Day sees the return of theater veteran and Repertory Philippines co-founder Baby Barredo to the director's chair. The Eric Chappel original tells the story of a hilarious reunion between a divorced man (Miguel Faustmann) and his estranged family one winter day.

With Bobby Garcia at the helm, Atlantis Threatrical Entertainment Group stages the first part of Tony Kushner's Angels in America. The Tony Award-winning play follows the life of one Louis Ironson (Nelsito Gomez) who abandons his AIDS-stricken lover, Prior Walter (Topper Fabregas). It is set in mid-1980s Manhattan and revolves around hard-hitting themes of homosexuality, drug addiction, and faith.