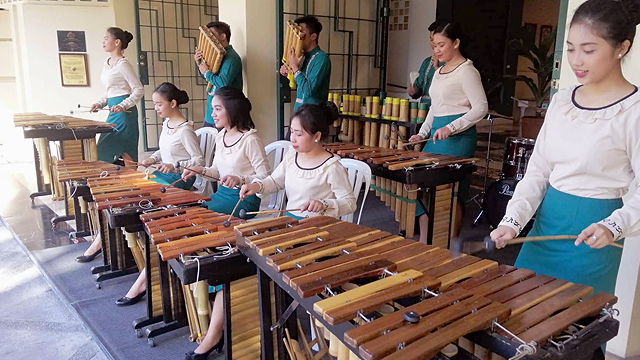 It's for one night only!

(SPOT.ph) If you find yourself often humming to The Phantom of the Opera's "All I Ask of You" or Wicked's "As Long as You're Mine," then you might just be delighted to know that Far Eastern University is holding a free concert that features your favorite songs from Broadway. It's not just any other performance, too, as the university's Bamboo Band is giving a one-of-a-kind rendition through bamboo instruments. A Toast to Broadway is on May 4, 6 p.m. at the Far Eastern University (FEU) Auditorium in Manila.

The concert celebrates the auditorium's 70th anniversary as well as FEU Bamboo Band's artistic director Norberto Cads' 10th year of serving the university. Before the Cultural Center of the Philippines was established, the FEU Auditorium was Metro Manila's hotspot for culture and the arts. Like the rest of the university, it is done in the Art Deco style through the vision of FEU architect, later National Artist, Pablo Antonio, Sr.

A Toast to Broadway also headlines artists Banaue Miclat-Janssen, who recently won Best Performer in a New Concept Production at the 2018 Aliw Awards; and Raymond Gorospe, who bagged silver medals for the Gospel and Broadway Vocals categories at the 2015 World Championships of Performing Arts.

A Toast to Broadway is on May 4, 6 p.m. at the FEU Auditorium, Far Eastern University, Nicanor Reyes Street, Sampaloc, Manila. Tickets, which are for free, are available for download through Ticket2Me. For more information, follow FEU President's Committee on Culture on Facebook.