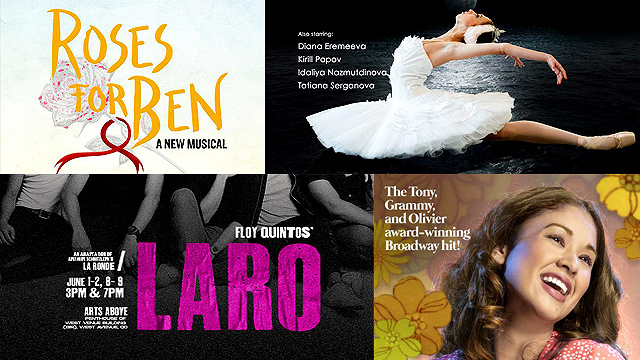 Theater in Manila: Exciting Shows to See Onstage This June

(SPOT.ph) The first half of 2019 gave us theatrical masterpieces like Andrew Lloyd Webber's The Phantom of the Opera, Duncan MacMillan's Every Brilliant Thing, Tony Kushner's Angels in America, and—of course—the rerun of Floy Quintos’ obra maestra, The Kundiman Party. And it seems that Philippine theater isn't going to be disappointing us anytime soon (or, probably, ever) with this month's list of shows to watch—from a sensual play about love and heartbreak to a jukebox musical about a music legend.

Here's your guide to musicals and plays that are worth seeing this June:

Laro, which was first produced by now-defunct Theater Now! in 2004, is Floy Quintos’ adaptation of Arthur Schnitzler's La Ronde. It tells the story of 10 male characters who encounter one another at some point in their lives, creating 10 vignettes about sex, love, heartbreak. Like the Schnitzler original, the play offers social commentary on how love transgresses class—and in this case, gender identity, gender expression, and sexual orientation.

Laro runs until June 9 at Arts Above, 112 West Avenue, Quezon City. Tickets, priced at P600, are available through Ticket2Me.

Beautiful, a jukebox musical written by Douglas McGrath, traces the life and career of singer-songwriter Carole King starting from when she was 16. It focuses on the artist's journey leading up to when she was inducted into the Rock and Roll Hall of Fame. Kayla Rivera (Side Show, Carrie) plays the lead role while Bobby Garcia takes the helm.

La Classique, also known as the Moscow Ballet of Classical Choreography, is coming to Manila for a performance of the much-loved classic Swan Lake. This story of love and forgiveness will feature Bolshoi Ballet stars Nina Kaptsova and Alexander Volchkov. It will be accompanied by the Russian Symphony Orchestra for a haunting but beautiful rendition of Pyotr Ilyich Tchaikovsky's masterpiece.

Roses for Ben, a Filipino one-act musical by Rayne Jarabao, dares to put the focus on Acquired Immunodeficiency Syndrome or AIDS, a condition that continues to plague the world despite our many medical advances. It tells the story of 21-year-old Ben (played alternately by Jude Matthew Servilla and Benj Espina) who finds out that he's HIV-positive after his ex-boyfriend dies of AIDS. This is part of Artist Playground's efforts to raise awareness about HIV and AIDS.

The film Quezon's Game showed how former president Manuel L. Quezon rescued thousands of Jews from Nazi Germany and gave them sanctuary in the Philippines. This often-forgotten part of history, particularly how 40 refugee families took shelter in Quezon’s three-hectare farm in Marikina, is also featured in Ang Pagsalubong sa Apatnapu. This musical is produced by the city’s community theater group.

Noli Me Tangere, The Opera, the first full-length Filipino opera, is getting yet another rerun due to public demand. It was first staged in 1957 at the Far Eastern University, and subsequent runs happened decades later: in 1987 at the Cultural Center of the Philippines, in 2012 at the University of the Philippines - Diliman, in 2014 at the Newport Performing Arts Theater, and in 2017 and early 2019 at the Cultural Center of the Philippines. An opera in three acts, it follows the journey of Crisostomo Ibarra, who returns to the Philippines after studying in Europe. Padre Damaso gets in the way of his dreams of opening up a school and marrying Maria Clara.

Noli Me Tangere, The Opera runs from June 21 to 23 at the Tanghalang Nicanor Abelardo, Cultural Center of the Philippines, Roxas Boulevard, Pasay City. Tickets, priced from P900 to P2,800, are available through Ticketworld.