The Guiob Church Ruins and Sunken Cemetery as National Cultural Treasures
Loading
Already a member? Log in
No account yet? Create Account
Spot.ph is your one-stop urban lifestyle guide to the best of Manila. 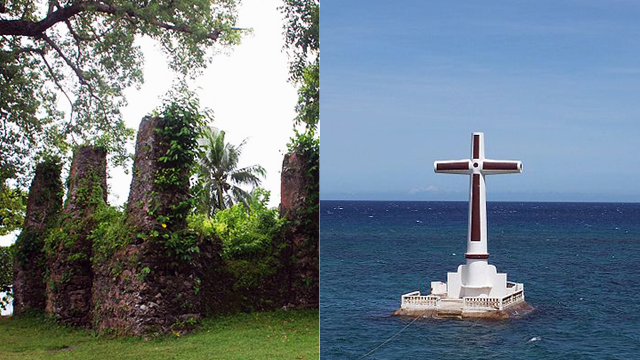 Only remnants of both sites remain after the 1871 eruption of Mt. Vulkan.

(SPOT.ph) The richness of the Philippines’ history is no secret to anyone. Relics of the past left behind by decades of colonial rule can be found around the country up until today, particularly in old the architectural design of old buildings and structures. Now, they serve as landmarks of Philippine history. The island-province of Camiguin in Mindanao holds some of the key structures from the Spanish colonial era: The Guiob Church ruins and the Sunken Cemetery—and the National Museum of the Philippines  reportedly declared them as National Cultural Treasures.

Only the moss-covered walls of the Guiob Church in Catarman survived the 1871 eruption of Mt. Vulcan, a nearby volcano that destroyed most of the church’s towering structures and the houses in the settlement where it belonged. The base of the old bell tower and portions of the convent still stand today, making the church complex a popular destination.

The Sunken Cemetery suffered a similar fate, known to have sunk below sea level after the eruption. The tombs remain underwater, but a large cross was built to mark and commemorate the deceased buried in the cemetery, as well as those who didn’t survive the eruption.

Some of the houses in the island were also named by the National Museum as Important Cultural Properties, which the National Cultural Heritage Act defines as cultural properties with “exceptional cultural, artistic, and/or scientific value.”

Along with these, the National Museum also declared the image of Nuestra Señora dela Soledad de Porta Vaga in Cavite City; the Pila Archaeological Site in Laguna; and the San Pancracio chapel bordering Manila and Caloocan as National Cultural Treasures (NCT).

Luzon and Visayas are also home to other Important Cultural Properties (ICP). Manila’s Immaculate Conception Cathedral, El Hogar Building, and the Philippine Post Office are just a few of the ICP sites in the Metro. Others in Luzon include the Pindangan Ruins and San Juan Church in La Union; San Fernando Cathedral in Pampanga; Cuartel de Santo Domingo in Laguna; and Boac Cathedral in Marinduque.

The declared ICP sites in Visayas include the Negros Occidental Musum and Yulo Park in Bacolod City; the art deco Daku Balay; the Balay ni Tana Dicang and Lacson Mansion in Talisay; and the Ma-ao Sugar Central in Bago City, among others.