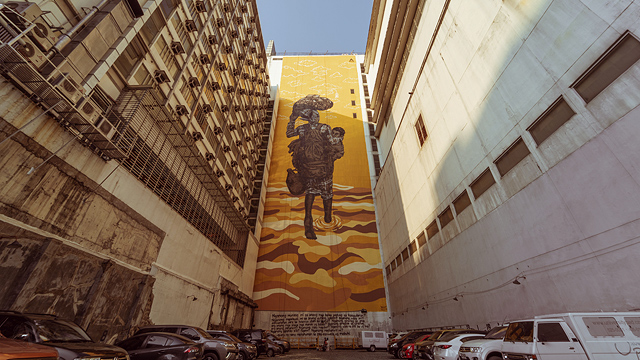 It is now the tallest mural in the country.

(SPOT.ph) More often than not, street artists—or artists of any genre, actually—create art to make a political statement or a social commentary. Take for example the ever-elusive Banksy who advocates peace and equality and criticizes capitalism through graffiti. This is also true for Filipino street artist Archie Oclos, who just unveiled a 70-meter mural dedicated to the Lumad community. Touted as the tallest mural in the Philippines, the piece titled "Bakwit" can be found on the wall of the College of Saint Benilde's School of Design and Arts along P. Ocampo Street in Malate, Manila.

Center for Campus Art director Gerry Torres, in an exchange with SPOT.ph, explained that the mural is part of "The 2018 CCP Thirteen Artist Awards at Benilde."  A pioneering project between the two institutions, it allows the exhibition of the prestigious Thirteen Artists Awards outside of the Cultural Center of the Philippines. It is curated by Torres alongside Karen Flores.

He also pointed out that despite the simplicity of the image, it also shows symbolisms so that viewers can be more critical about the situation of our indigenous communities and the value of education. We can see a school bag that contains clothes instead of books, a bottle of water that the evacuee has to ration on her way down from the mountains, a sack of rice that the whole family has to share, and a few books that can hopefully compensate for the months or years that she won’t be in school. What’s most striking is the toga cap and diploma drawn with broken lines, depicting that education is nothing but a far-fetched dream for these evacuees.

The mural took 24 days to finish. At the bottom, Oclos painted a few words in the native language of the Lumad to give a voice to their unheard cries. He translated this in Tagalog in a Facebook post:

Oclos graduated with a degree in Painting from the University of the Philippines – Diliman’s College of Fine Arts, where serving the country through art is of top priority. He is a native of Catanduanes and comes from a family of farmers and fishermen.