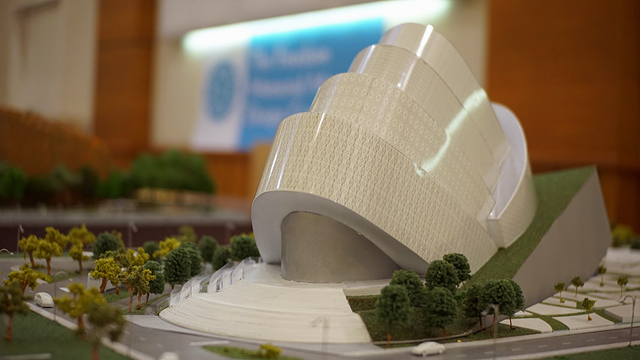 Freedom Memorial Museum to Be Built at UP Diliman

It looks a lot like a raised fist, the symbol of solidarity.

(SPOT.ph) Despite first-hand stories, physical evidence, and class suits won abroad, the atrocities during the reign of late dictator Ferdinand Marcos are still the subject of many debates and a favorite topic for historical revisionists. Hoping to immortalize facts on this dark period in Philippine history, the Human Rights Violations Victims' Memorial Commission is set to build "a memorial that shall stand as a monument to the heroism of human-rights violations victims during martial rule in the Philippines from 1972 to 1986." This flagship project is part of the implementation of Republic Act 10368, which is also known as the Human Rights Victims Reparation and Recognition Act of 2013. The Freedom Memorial Museum, as the structure is called, is set to rise within the University of the Philippines in Diliman, Quezon City, in 2022.

The Freedom Memorial Museum, according to their website, "aims to build an experiential tapestry of lives, ideals, courage and determination of the victims and, in the end, the heroes of freedom." It's poised to house memorabilia, artifacts, audio-visual material, books, and documents that can spread information about this period of tyranny. It will identify the heroes—farmers, professionals, workers, academics, students, religious activists, and artists from all over the Philippines—that resisted state-sponsored violence and fought against human rights violations.

It was revealed by Commission on Human Rights Chairman Chito Gascon on August 21 that the design of the Freedom Memorial Museum is by freelance architects Mark Anthony Pait, Mark Angelo Bonita, and Wendell Crispo. The three won a design competition that was opened to architects and non-architects in April, and they are now P1 million richer (collectively, at least).

Their winning design, called "Fall of Brutal," uses elements of Brutalist architecture, a popular style in the mid-20th century that was also used for the Cultural Center of the Philippines and the Philippine International Convention Center—both erected during the Marcos period. The seven-storey building is reminiscent of a raised fist, a common gesture and symbol of solidarity during Martial Law.

"During the years of Martial Law, it felt like you were imprisoned in your own country. We want the spectators to feel that," said Pait in a report by Inquirer.net. Visitors will walk through a narrow pathway upon entering the museum, then through bars once inside. There will be the Halls of Agony, where all types of tortures during the Martial Law regime will be depicted; a Memorial Hall, where the names of the Martial Law victims will be enshrined; and a display of the Aviation Security Command van that took Senator Benigno Aquino Jr. to an Army hospital after he was assassinated at the Manila International Airport in 1983.

The Freedom Memorial Museum is set to open on September 21, 2022, which is also the 50th anniversary of the declaration of Martial Law. It will be located along C.P. Garcia Avenue, adjacent to university's College of Fine Arts.