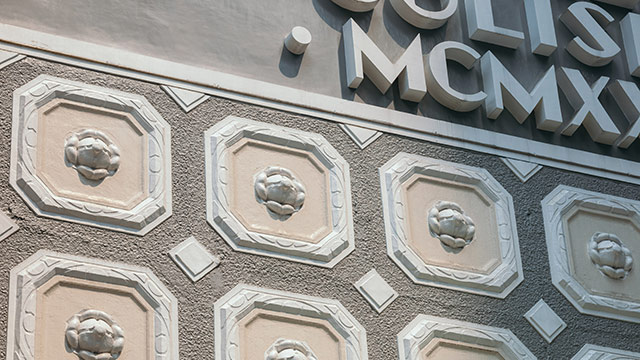 Rediscover the historic structures that define this district.

(SPOT.ph) Most Generation X folks who grew up in the 1990s remember Malate as a bohemian enclave of cool bars and cafés—a memory that would leave Generation Y and Z scratching their heads now. But the real Malate goes back further than this.

Apa Ongpin, an editor and a keeper of sorts of Malate’s oral history, gives us a background of the district. “Malate was originally a small fishing village, whose only noticeable features during the Spanish era were the Malate Church and the outpost of Fort San Antonio de Abad,” he says. “During the American era, the government developed Malate into a suburb, laying out gridded streets running exactly North-South and East-West, with a large rotunda (today’s Remedios Circle) in the center. The advent of the automobile and the bus made Malate a viable residential proposition.”

Malate’s single-family homes have since been replaced with high-rises and commercial buildings. But with the recent discovery of war heroine Maria Orosa’s grave marker at the Malate Catholic School, others are remembering its historical importance. Take a closer look at these 10 interesting spots you can find in Malate area.

Check out these 10 places in Malate with fascinating stories to tell:

Start at the heart of the district at Malate Church along M.H. Del Pilar, which is fronted by Rajah Sulayman Park, Roxas Boulevard beyond it, and Manila Bay.

Malate Church is one of the few remaining Spanish Colonial structures in the district, and dates back to 1864 (with its previous two churches erected in 1591 and 1680). It was burned during World War II, and restored in 1950. Heritage writer Glenn Martinez says that it is one of the most important spots in Malate and describes it in his blog: “Father Pedro Galende describes the façade of the church [as a blend] of Muslim and Baroque architecture. ‘The solid, compact, dark stone structure is enhanced by cylindrical end buttresses, a few openings, and an overall ornateness of design.’”

Ongpin, who lived in the North Sy-Quia Apartments from 1991 to 2009, cites the building, along with the South Sy-Quia, Michel, Angela, and Carmen Apartments (the latter four have been vacated or demolished), as important pre-war structures in Malate. “Built in 1938, it was the first of the Sy-Quia family’s three ‘high-rise’ buildings, and contained the first private elevator in the Philippines, made by Otis [and still working],” he says of North Sy-Quia.

“The original architect was either Fernando Ocampo or Pablo Antonio; descendants of both families claim that they designed the Sy-Quia Apartments. While North Sy-Quia has many Art Deco details, it is more modern. It continues to operate as the oldest rental apartment, and over the years has hosted a lively community of diverse personalities, many of them artistic, such as BenCab and Annie Sarthou, and [the late] Carlos Celdran.”

Most of us are familiar with the Agoncillo House in Taal, Batangas, which was the home of the Mother of the Philippine Flag. But heritage enthusiast Martinez points to another Agoncillo house that you could check out after visiting Malate Church. It is now a placement agency office and a laundromat, and it was her family’s home in Manila post-exile, where she and her remaining children endured the hardships of World War II. You can’t go inside, but you can read the heritage marker that identifies it.

Malate district, which includes a whopping 57 barangays, stretches across part of the Bay Walk facing Manila Bay, as well as a portion of the Cultural Center of the Philippines Complex.

Located at the headquarters of the Central Bank of the Philippines is the Metropolitan Museum, one of the major museums in Metro Manila. Architect Lor Calma designed the minimalist interiors of the Tall Galleries, which is used to exhibit contemporary art. The structure, with its fortress-like, adobe-clad walls, was designed by architect Gabriel Formoso to blend with the Spanish Colonial-era Fort San Antonio de Abad behind it, which is closed to the public. “Fort San Antonio de Abad is like a micro-Intramuros, but all walls, with cannon emplacements, proved to be spectacularly useless during the British invasion of Manila on September 24, 1762, when the British overran and captured it in a couple of hours,” Ongpin says about this forgotten fort.

Metropolitan Museum of Manila is at Roxas Boulevard corner P. Ocampo Street, open Monday to Saturday; or visit their website.

Inaugurated in 1967, the Ramon Magsaysay Center is one of the finest mid-century modern structures in Malate. The building, which holds the offices of the Ramon Magsaysay Award Foundation, was designed by Alfredo J. Luz and Associates with architect Ruben Payumo as project manager. The 18-storey tower on 12 pillars clad in travertine marble, all made to withstand the salty air from Manila Bay. Its colonnaded area acts as a wonderful breezeway, and extends to an outdoor plaza that is open to the public.

Many still refer to P. Ocampo Jr. Street’s original name—Vito Cruz—as the street of prominent Philippine families. Today, it is lined with schools and important landmarks.

Art Deco Philippines founder Ivan Man Dy’s must-see architectural gem in Malate is the Rizal Memorial Sports Complex. “Mainly because it is the biggest Art Deco building in the area, it is very accessible to the public, and also because of what architect Gerard Lico did in terms of its restoration in 2019 for the Southeast Asian Games,” he says. National Artist Juan Arellano designed it in 1934 and it is the only Art Deco coliseum in Southeast Asia. Man Dy, who holds Art Deco tours for Old Manila Walks, also cites important features, such as the Visitor Center in the main lobby that shows the history of the coliseum, and a sports museum within the complex.

This boutique hotel was designed by National Artist Pablo Antonio in the 1930s as the mansion of Supreme Court Justice Antonio Villareal. Overlooking what was once Harrison Park (now the defunct Harrison Plaza), it was one of the many luxurious houses along that street. Converted into a 91-room hotel in 1995, the main house, which serves as the hotel lobby, retains its pre-war façade and delicate Art Deco window grilles. In 2014, the hotel acquired the adjacent, 1935-built Legarda house, which they converted it into Café Alicia. It is a fantastic example of adaptive reuse, and is so charming you tend to forget the multi-story hotel building behind it.

Ed Calma’s 2007 modernist marvel unfolds like a silver sculpture along narrow Ocampo Street. Students and teachers describe using the building as “an experience.” Visual artist and School of Design and Arts (SDA) multimedia professor Jeryc Garcia relates: “I always love getting lost in the numerous pocket spaces that the irregular shape of the SDA building creates. You can turn a corner or enter a series of doors and suddenly you’re in a bright open-air space, or in a small stairwell where your sense of up or down gets messed up.” Don’t forget to visit the Museum of Contemporary Art and Design on its ground floor.

San Andres is a small district that borders Malate and Paco. Remedios Circle, on the other hand, is the location of a former cemetery, that has since been converted into a public plaza.

This church, located on the border of Malate, is a simple but elegant example of mid-century ecclesiastical architecture. Architect and heritage expert Dr. Gerard Lico explains that its details show subtle Gothic influences, as seen in the wood panelling and vaulted ceiling—no surprise there, as its architect was Carlos Santos-Viola, who designed the Iglesia ni Cristo churches. “However, the original belfry was toppled by the 1990 earthquake and was replaced soon after,” says Lico. Further renovations were made by Dominic Galicia, the architect of Saint Alphonsus Parish in Magallanes Village.

Cap your Malate tour with a cup of tsokolate eh in the cozy Filipino interiors of Café Adriatico, arguably Remedios Circle’s most famous restaurant. Its opening in 1980 by the late Larry J. Cruz is credited as influential in creating a café culture in the country, and in transforming Remedios Circle into an area of fine restaurants. “The early '90s saw a huge revival of Malate, which I later wrote about in a book called Malate, commissioned by Larry J. Cruz, who was responsible in no small part for the renaissance of the district,” Ongpin recalls.

As interesting as the district is, Ongpin can’t help but long for Malate in its heyday, and hope for something better. “The Malate I knew is fast disappearing, betrayed by increased density and choked by traffic. The biggest crime for me is the tearing down of the heritage buildings. It is eviscerating the district, destroying its soul,” he says.

“Once in a while, we visit North Sy-Quia to see our old neighbors, many of whom we still count as lifelong friends. I have good Malate memories, and will have them until the day I die.”

Con-00263 Design And Heritage Malate Manila Museums Churches Architecture Design De La Salle College Of Saint Benilde
Your Guide to Thriving in This Strange New World
Staying
In? What to watch, what to eat, and where to shop from home
OR
Heading
Out? What you need to know to stay safe when heading out