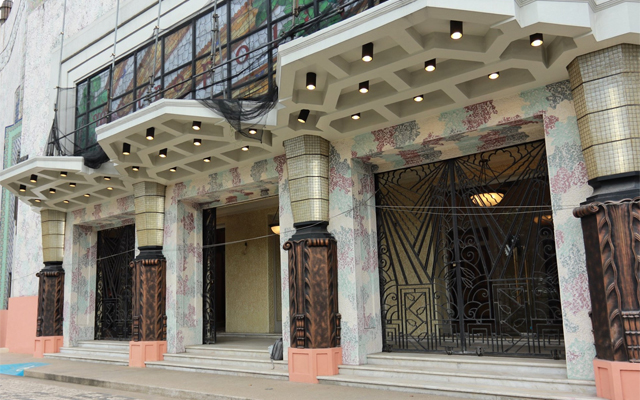 PHOTOS: The Met Theater Is Almost Ready for Reopening

It's hosting an evening show in April.

(SPOT.ph) After decades of being completely abandoned, the Manila Metropolitan Theater (a.k.a. the Met) is finally ready to reopen. This comes after years of restoration attempts to bring back the Grand Old Dame to its former glory. And on April 27, it is hosting an evening show in celebration of the 500th anniversary of the Victory at Mactan, according to the National Quincentennial Committee.

"Doors of the newly restored Met will be open to all Filipinos from all classes of our society. For this is the people's theater," National Commission for Culture and the Arts Chairman Arsenio “Nick” Lizaso said on Monday after showcasing the venue's nearly completed renovation.

Manila Mayor Isko Moreno is also working on a partnership with the arts agency to celebrate the 450th Manila Day on June 24 at the Met.

Check out these photos of the partially restored Manila Metropolitan Theater:

The Met was designed by architect Juan M. Arellano and inaugurated on December 10, 1931. Like the rest of Manila, it was partially destroyed during World War II. A restoration was initiated by then-governor of Metro Manila Imelda Marcos in 1978, only for the venue to be closed down again in 1996. Former President Gloria Macapagal-Arroyo attempted to revive the theater in 2010, but the project didn't push through. By 2012, the theater was completely abandoned.

In 2015, the Government Service Insurance System sold the property to the National Commission for Culture and the Arts, which initiated a restoration project. This was in partnership with the National Museum of the Philippines and the National Historical Commission of the Philippines. The theater was reopened for a day on December 14, 2016, to celebrate its 85 years as well as recognize the efforts of heritage conservationists, artists, and volunteers of the restoration program formerly known as METamorphosis. The restoration efforts took a pause due to internal problems and restarted in 2019.

Manila Metropolitan Theater Manila Heritage Adventurer Savvy Seasoned Heading Out
Your Guide to Thriving in This Strange New World
Staying
In? What to watch, what to eat, and where to shop from home
OR
Heading
Out? What you need to know to stay safe when heading out