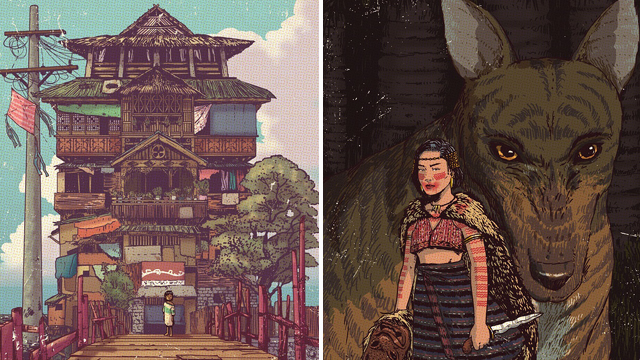 (SPOT.ph) Studio Ghibli films give a feeling that is hard to describe—and one Cebuano artist's redraw of the Japanese animation studio's biggest films have managed to hit even harder thanks to a uniquely Filipino twist! Pop artist Bastinuod recently released a series of illustrations that reimagine Ghibli's most unforgettable characters and settings with Pinoy references. Check out this artist's first piece posted on Facebook on February 7:

Yup, that is Bastinuod's take on the famous bathhouse from Spirited Away. There is even a kid in Chihiro's striped shirt standing at the other side of the bridge. Spot that saranggola caught in the messy electrical pole, too. The longer you look at it, the more details you'll see!

Bastinuod then shared his reimagining of that famous shot of Totoro with sisters Satsuki and Mei under the rain from My Neighbor Totoro. Seeing Ghibli's mascot as a tarsier sure is something else. Then there is also Howl's Moving Castle—bayanihan version.

The series was meant to end there, as Bastinuod shares in the captions, but it looks like he couldn't get enough of this alternate Ghibli reality either! With all of his posts on the Filipino Ghibli world going viral, he soon followed it up with the famous Ponyo kiss on February 11.

The soul-crushing Grave of the Fireflies was up next.  Entitled Bakwit, Bastinuod dedicated the piece  "to all of our displaced Lumads." He posted the artwork on February 12, just a few days before news broke about a so-called "Rescue Operation" for Lumads at the University of of San Carlos in Cebu City resulted in the arrest of seven indivuduals, three of whom are part of indigenous groups.

He also made an close-up of the Totoro-slash-tarsier hybrid and a magical take on Princess Mononoke, complete with the Philippine "witch dog" breed as Moro to cap the series off. The Ghibli series is available as a print or as stickers, said the artist in the caption; and you can contact him directly for inquiries.

Bastinuod is a visual artist known for his comic book-inspired style. He is known for using his art to create commentary on current events, apt as his artist name is a combination of his real name and the Bisaya word for "real," tinuod.

Adventurer Savvy Seasoned Topspot Cebu Bastinuod Studio Ghibli Staying In Artist Cebu
Your Guide to Thriving in This Strange New World
Staying
In? What to watch, what to eat, and where to shop from home
OR
Heading
Out? What you need to know to stay safe when heading out