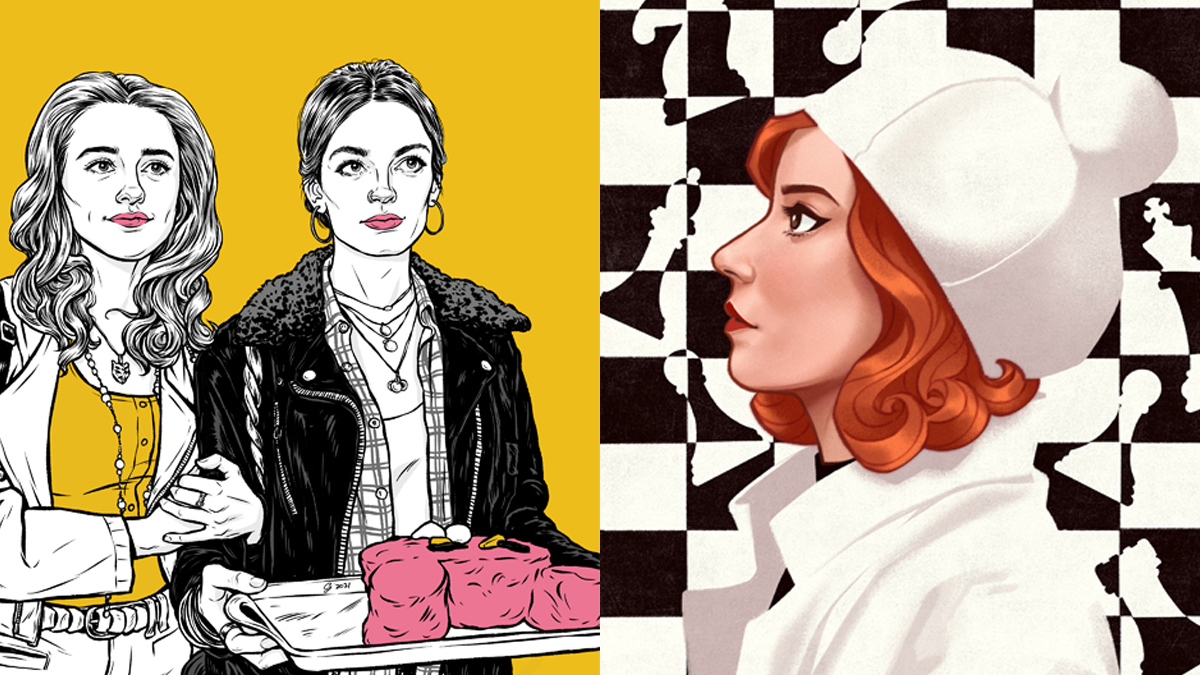 In celebration of International Women's Month!

(SPOT.ph) From Moxie's rebel girl Vivian to Sex Education's feisty student Maeve Wiley, Netflix has proven to be a platform where you can find shows and films featuring strong, diverse, and authentic female characters. In celebration of International Women’s Month, they collaborated with Filipino artists Betina Continuado (a.k.a. Betsy Cola) and CJ De Silva for a series of reimagined portraits of their favorite female characters from movies and TV shows carried by the streaming site.

"It’s good that there is an ongoing effort to improve the portrayal and visibility of women in broadcast media. Platforms such as Netflix are delivering interesting and fleshed out characters that are relatable to a lot of women," 26-year-old illustrator Betsy Cola tells SPOT.ph in an online exchange.

"I’m glad [that] both the audience and the creators are more conscious about the male gaze. Now we have more fleshed-out female characters. We get to empathize now not just with the leads but even with the villains, or the side characters. Physical diversity is more visible now. We get to see varied body shapes and sizes, heights, skin color, hair, etc," 33-year-old artist CJ de Silva adds.

Still, both artists agree that much can be done in terms of representing women's experiences, cultural diversity, and intersectionality. De Silva emphasizes that "subservience is still mainstream" with the need for female narratives to go beyond focusing on issues of violence.

Her favorite female characters are Sex Education's Maeve and Aimee, who portrayed women empowerment during that bus scene on Season 2. "Seeing different female characters realising that the one thing they have in common was male abuse—powerful," de Silva explains.

"While the rest of the world is divided whether they’re Team Good Boy or Team Do San, I’m proclaiming that I am 100% Team Dal Mi! She’s unapologetically ambitious and street smart. She’s a pragmatic dreamer. Brilliant ideas fascinate her. She takes risks. I wish Dal Mi heard Nam Do San when he said, 'Your idea fascinated me too.' Because for me, that’s another way of saying 'I love you.'"

"She’s a nerd and proud of it. She’s intelligent and eloquent, but still naive and makes a lot of mistakes. She’s got a temper but that doesn’t make her a bad person. It normalises vulnerability. Never Have I Ever is such a rewarding watch. It’s a nuanced update on the coming-of-age genre with a wonderfully diverse cast."

"I love Max so much I named our second cat after her. I love how she shook the boys out of their geeky snobbery, beating Dustin at Dig Dug and proving that she’s an essential part of the club. But more importantly, I also love how her relationship with Eleven evolved: from being someone Eleven was initially jealous of, to the best of friends who want the best for each other. My favorite Max moments: one, when she pushed Eleven to find her own style; and two, when she reminded Eleven that boyfriends aren’t everything!"

"Three thoughts came to me when I saw Enola Holmes: I wish I had an Enola Holmes to look up to when I was a young girl. I hope a lot of parents saw this movie, because imagine raising a girl in a home filled with knowledge, skills, art and most of all—freedom! And lastly, that line: 'Our future is up to us.'"

"Initially, I couldn’t relate to Usagi because she seemed athletic and outdoorsy. But as I got to know her character more, I identified with her introversion and her sense of independence. I also think her being a mountain climber is such a powerful symbolism for the mountain of struggles women face."

"What I love about these characters are that they are flawed individuals and each of them has their own motivations and struggles to overcome. These characters don’t just exist for the male gaze or as a plot device to another character’s development," she says.

"I saw a lot of my younger self in Vivian from Moxie. I was around that age too when I started getting into Riot Grrrl music. I was also a shy and timid teen so learning about women from the Riot Grrrl movement who weren’t afraid to be loud and disruptive in a male-dominated space was empowering. Since I went to conservative institutions, seeing Vivian and her friends banding together and standing up against toxic masculinity and sexism in their school was quite a cathartic experience!"

Both de Silva and Betsy Cola believe that art can be used to champion women's causes.

"In some cases, I deliberately wanted to tackle certain women’s issues in my artwork because they were causes I felt strongly about. Not necessarily because I was experiencing them firsthand but because I constantly saw and heard so many women going through those ordeals. I really wanted to voice out my stance on the matter and I did it the best way I knew how which is through art," Betsy Cola explains.

De Silva, on the other hand, recalled how "feminism hasn’t always been part of [her] work." As a kid, she would paint a lot of mother-and-child motifs just because they appealed more to people. But growing up and learning about feminism, she learned how to look at her creation with feminist lens.

"I would say I’ve always had a feminine aesthetic—soft pastel color palette, women with soft features, in flowy dresses, floral motifs and languid poses heavily influenced by the Italian Renaissance—but now I’m aware of the value of female and feminine representations."

Staying In Netflix Art Adventurer Savvy Seasoned Illustrators
Your Guide to Thriving in This Strange New World
Staying
In? What to watch, what to eat, and where to shop from home
OR
Heading
Out? What you need to know to stay safe when heading out