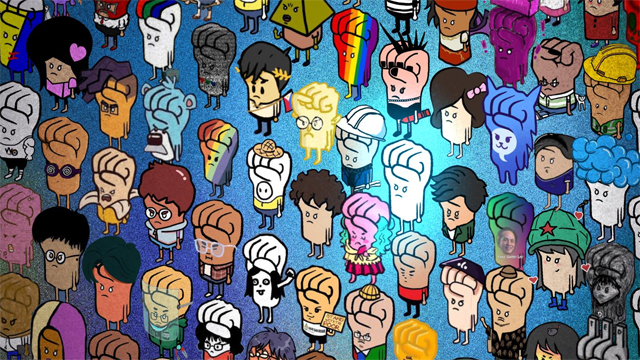 Tarantadong Kalbo didn't expect it to happen, but it happened.

(SPOT.ph) Just how powerful can an illustration be? A recent illustration by Tarantadong Kalbo that has ended up becoming an unintended, impromptu collaboration with Filipino artists is sending gooesbumps across the Internet. Kevin Eric Raymundo on Saturday, July 17, posted an image with the title Tumindig online. It shows rows and rows of anthropomorphic fists that are bowing down in obedience—except for one, who is standing its ground (a.k.a. tumitindig). In the last few days, local artists, writers, and other activists have been adding their own fist-shaped avatars in solidarity.

Tumindig references the administration's signature gesture of a fist bump, which President Rodrigo Duterte would often do in photos along with his supporters. In the past, people have used it as an indicator of someone's alliance. Philippine Army Colonel Mike Logico, a critic of the president's neutral policy in the West Philippine Sea, didn't pose with a fist bump in a photo with fellow uniformed men in 2017. In a 2019 photo, Senators Grace Poe and Nancy Binay did not follow suit with their fellow senate race winners who posed for a photo with the signature fist bump.

According to Raymundo, he didn't expect the evolution of his Tumindig piece. "Nangyari na lang siya biglaan. 'Yon kasing artwork is a finished piece in itself. Nagkusa lang talaga silang lahat," the illustrator told SPOT.ph. Everything just happened organically, he shares.

Some people are also comparing the solidarity to that epic battle scene in Avengers: Endgame with Thanos and his alien armies on one side and the Avengers on the other.

Raymundo is known for making commentaries through art. His most recent pieces include a satirical panel on Sara Duterte not wearing a facemask while wearing a shirt that reminds everyone of health protocols, the Department of Trade and Industry's move to "standardize" local cuisines, and Education Secretary Leonor Briones' demand for the World Bank to apologize over the release of a report on the state of education in the Philippines.

These illustrations, obviously, drew the ire of many administration supporters. In another panel, Raymundo illustrated how one shouldn't be afraid of trolls when making light of the truth: "Yan talaga ang pinakaayaw ko sa lahat. Ang mabuhay sa takot."

Tarantadong Kalbo Web Comics Art Government Adventurer Savvy Seasoned Staying In Trending
Your Guide to Thriving in This Strange New World
Staying
In? What to watch, what to eat, and where to shop from home
OR
Heading
Out? What you need to know to stay safe when heading out