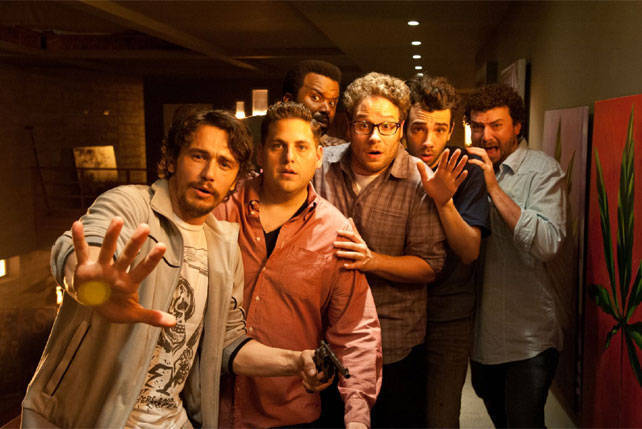 MOVIE REVIEW: This Is The End

What do you get when you put six comedians together in one movie?

STORY: Six Hollywood comedians (Seth Rogen, Jay Baruchel, James Franco, Jonah Hill, Danny McBride, and Craig Robinson as themselves) are partying with many other celebrities at James Franco's Hollywood estate when the end of the world disrupts the merry-making. Despite all the fears and dangers brought on by the Apocalypse and Judgment Day combo, hilarity ensues as the actors try to survive such things as hunger, a rampaging alien, and one another. Rated R-16 by the MTRCB for depictions of sex, drug use, and frequent profanity, This Is The End is an adult comedy with horror and sci-fi elements thrown in for added big screen enjoyment.

Seth Rogen. Unlike the other actors in the star-studded cast, Rogen doesn't have a signature scene in This Is The End that viewers will be buzzing about after the movie is over. But he's here in the "pluses" section because he co-wrote and co-directed this movie (with Evan Goldberg), and it's my way of thanking him for co-creating the most original comedy I've seen since Borat. And This Is The End isn't just insanely funny, it's also surprisingly scary, with shocks that jolted me out of my seat the way The Conjuring did. Credit Rogen and Goldberg also for the inspired situations they devised for the movie, which resulted in 50% of the film's dialogue being adlibbed by the gifted cast.

Craig Robinson. I  never noticed this intimidating African-American comedian (he was in the tv series The Office with Steve Carell and is a voice talent on The Cleveland Show) in a movie before, but he sure made me laugh whenever he squealed like a girl at some off-camera horror, and when he drank his urine to quench his thirst. Now, I'm a fan.

Jonah Hill. The part where he's playing with James Franco's gun is hilarious and nerve-wracking, and it's not often that you feel two very different emotions during a single scene in a movie. Also unforgettable is Hill's midnight encounter with a "big" alien. 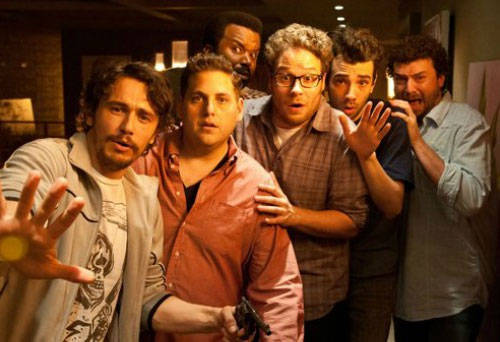 The axe-wielding Emma Watson. Who would have thought that giving the Harry Potter star an axe and putting her in a house with six (not seven) guys a la Snow White would lead to such priceless hilarity? It's primarily because of Watson's hilarious scene that I'm glad This Is The End is rated R-16 by the MTRCB. That way, Hermione Granger's young fans won't see their favorite fictional bookworm curse like a sailor.

Michael Cera and Channing Tatum. Just wait till you see what the Apocalypse has in store for the stars of Juno and Magic Mike. 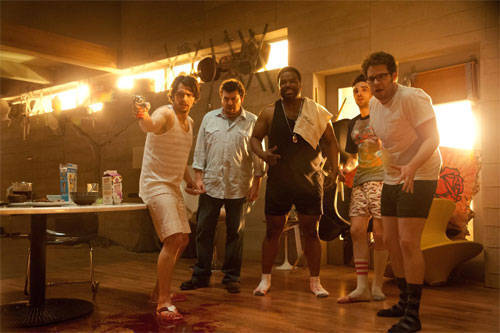 Jay Baruchel. Compared to the other comedians in this ensemble, the How To Train Your Dragon voice talent is a whining bore, saddled as he is with unfunny business like complaining about how unfriendly Los Angeles is and explaining the Apocalypse to his buddies. Baruchel is apparently so boring, no one could even come up with a wisecrack about his filmography.

IN BRIEF: This Is The End is one of the funniest, most unpredictable and most original adult comedies I've seen in a while, but it's not for everyone.

Movie Review Thisistheend Comedy Sethrogen Jamesfranco Jonahhill Craigrobinson Emmawatson Michaelcera Channingtatum
Your Guide to Thriving in This Strange New World
Staying
In? What to watch, what to eat, and where to shop from home
OR
Heading
Out? What you need to know to stay safe when heading out