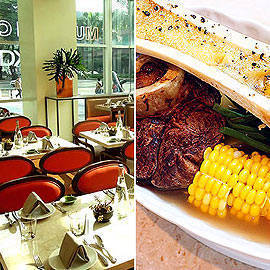 CHECK IT OUT: Kabila at Museum Cafe, Makati

Kabila proves that when it comes to Pinoy cuisine, it’s more fun on the other side. 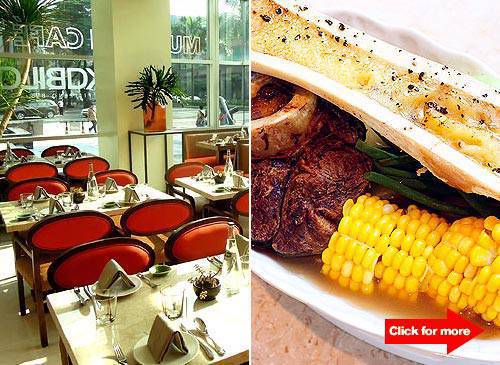 (SPOT.ph) Where do you go after reinventing diner cuisine, jazzing up homey comfort food, dabbling in wood-fired cooking, and setting up a space-themed disco-lounge? Why, you go back home, of course. In more ways than one-Kabila Filipino Bistro is not only the Raintree Restaurants Group's first venture into Filipino food, it's also built right beside the restaurant that first made their name, Museum Café.

The name itself is pretty clever, too. It's not just a sly wink to their restaurant's location (literally, just on the other side of the newly-renovated M Café), it's also reflective of the kind of cuisine they're going for: Filipino, but quirky and down-to-earth, the "other side", so to speak, of the usual Filipino cuisine.

Here, thoughtful presentation is key. Their signature "Kabila" Pancit (P325) is served in a banana-leaf pocket, while the always-humble pinakbet is transmogrified into A Pot of Pinakbet (P250), served in a lotus leaf pouch and clay pot.

Raintree Restaurants corporate chef Kalel Chan and creative director Martin Wisniewski embarked on food tours all over the Philippines in the name of menu research, unearthing some rare foodie finds like the bagon de gata, a coconut-milk flavored variant of the classic bagoong, from Zamboanga. In the end, though, they wanted to keep things simple. "We wanted a generally accepted Manila taste," says Kalel. "Fresh and Simple Filipino Flavors" is Kabila’s tagline.

But they couldn't resist taking a few tongue-in-cheek jabs at the formula, like that inspired combo of grilled pork sinugba and a mild tanguigue kinilaw which becomes, ahem, "Sinuglaw" (P295). Tired of fighting over the bone marrow in your typical serving of bulalo? Well, Kabila ends all arguments by dropping a whole leg bone of pure, buttery marrow in their Bone Marrow Bulalo (P595).

Among their dessert selections, the Impossible Cake (P195 per slice, P1,850 for a whole cake) is a standout because, for one thing, it's like getting three desserts in one: it's leche flan layered on top of chocolate cake, the cake acting as a moist, dark, delicious foil to the creaminess of the flan. You can alternate between savoring each layer separately and taking a bite of both at the same time-either way, it's impossible to go wrong.

Their proudest moment, though, may be the Juicy Fruit Mojito (P220). Yes, you read that right: a minty alcoholic drink that is proud to taste exactly like the ever-popular chewing gum. One sip, and we just had to break out into the jingle: "Mas malinamnam!" Come on, who wouldn't?

Kabila Raintree Kalelchan Mcafe Ayalamuseum
Your Guide to Thriving in This Strange New World
Staying
In? What to watch, what to eat, and where to shop from home
OR
Heading
Out? What you need to know to stay safe when heading out