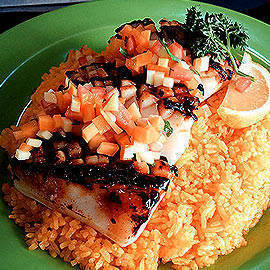 CHECK IT OUT: Heroes Concept Store at Bonifacio High Street

Fancy a serving of tapa with eggs and Iron Man on the side? 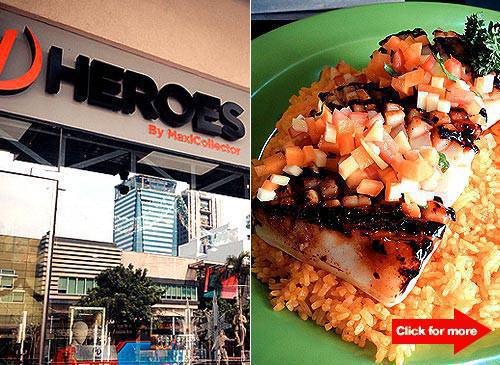 Batman, Iron Man, and more stand watch over your dinner. Click for more.

(SPOT.ph) On a street of almost identikit high-end brandage, Heroes Concept stands out by virtue of, well, concept alone. There’s no shortage of eyeballs that are drawn irresistibly to Bonifacio High Street’s geek-toy-store-slash-cafe, from little kids with yayas in tow to expat types in business attire, all of them ogling at the larger-than-life statues, maquettes, and busts of fictional do-gooders. Truly, superhero geeks have broken into the mainstream.

"It’s because of the movies," explains Ren Cayetano, owner and proprietor. "Dati, you had to be a huge superhero fan to know the Avengers. The other day, there was a two-year-old here who knew all their names. Even 40- or 50-year-olds have [seen] the movies." It’s partly because of this popularity that Cayetano transformed, Autobots-style, the space from a retail space  into Heroes Concept, a friendly geek cafe-slash-toy store that offers food, drinks, and collectibles under one roof.

The major superheroes on both the Marvel and DC side are well-represented, but one look at the prices, and you know that this place is no simple toy store-it’s for serious collectors only. A Captain America maquette from Sideshow Collectibles runs at P74,995. A typical piece, like a Hot Toys figurine of Commissioner Gordon, will set you back around P12,995. Ren’s oldest piece in the store, a very rare bust of the Fantastic Four’s Thing that dates back to 2004, runs for P119,995, while a Superman Returns cinemaquette (featuring a silicone face and realistic hair) can set you back P149,500.

Those are prices that serious hobbyists are willing to play...really willing. Before the big movie boom, Ren would be happy with orders of 15 to 20 pieces, but a recent Hulk piece from The Avengers was able to snag 130 orders. But even casual fans can step inside Heroes Concept to dine under the gaze of their favorite superheroes, with a menu culled from a list of Cayetano’s faves.

Their Dare-Devil Shrimp (P295) is a spicy hottie of a shrimp appetizer. The fried wonton strips give the dish texture, while the chili flakes scattered liberally all over the plate will make you reach for a glass of their great Iced Tea (P80). For their set meals, we tried the fresh, chewy Squid Steak (P295) and the crispy, bacon-esque Sweet & Spicy Tapa (P245), which actually isn’t so spicy, but still excellent. The house fried rice can get pretty overwhelming, so we decided to take pity on our poor stomachs and lay off the offered beer. The desserts are the real, ahem, superheroes, though: Red Velvet Cakes (P70) in the Slice tradition (which Ren’s sister owns), but decorated with very cute Captain America, Hulk, or Iron Man icing.

Dining and drinks with superheroes? Why not? They won’t bedgrudge you if you go home with a full belly and a toy under your arm, too. But superheroes aren’t the only heroes who are the stars in Heroes Concept. "I’m a Star Wars and Lord of the Rings fan," says Cayetano. "’Pag may sci-fi, Star Wars heroes, pwede naman e. I even have NBA figurines coming up. Parang mga hardcourt heroes." No anime, though. "’Di ko hilig e."

Heroes Concept Maxicollector Batman Superman Avengers Ironman Toy Geek
Your Guide to Thriving in This Strange New World
Staying
In? What to watch, what to eat, and where to shop from home
OR
Heading
Out? What you need to know to stay safe when heading out