Available in selected branches only.

(SPOT.ph) Kentucky Fried Chicken continues their habit of replacing bread, with the latest incarnation of the Double Down.

The Double Down, where battered chicken fillets replace buns and sandwich cheese, bacon, and secret sauce, was launched in the Philippines in 2010. A spicier and crunchier Zinger version was introduced a year later, but the entire dish was eventually discontinued in 2012.

The Double Down returned to stores in 2014, this time with a spawn, the slightly smaller Junior Double Down.

This year, and only for two days-January 26 to 27-selected KFC branches will be offering the Double Down Dog, a large, pounded chicken fillet hugging a hotdog embellished with a cheesy sauce. The product will be available in selected outlets and only 50 pieces per branch will be released per day. 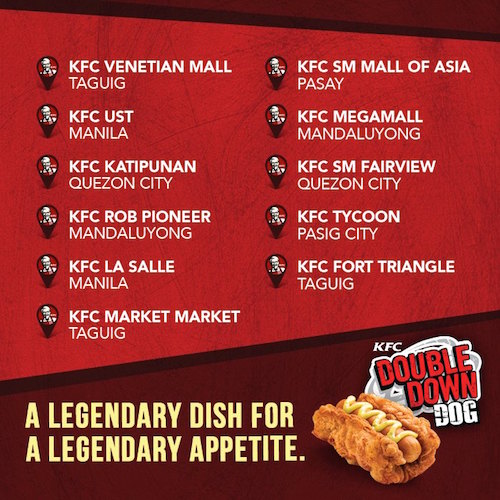 Our calculations compute that only 1,100 Double Down Dogs will be sold in the Philippines. Will you be one of the lucky ones to try them? We suggest sharing, though.

Kfc Doubledown Dog Chicken
Your Guide to Thriving in This Strange New World
Staying
In? What to watch, what to eat, and where to shop from home
OR
Heading
Out? What you need to know to stay safe when heading out