The summer ice cream flavors at Sebastian's will test your EQ
Loading
Already a member? Log in
No account yet? Create Account
Spot.ph is your one-stop urban lifestyle guide to the best of Manila.

The summer ice cream flavors at Sebastian's will test your EQ

Something chocolate and something fruity 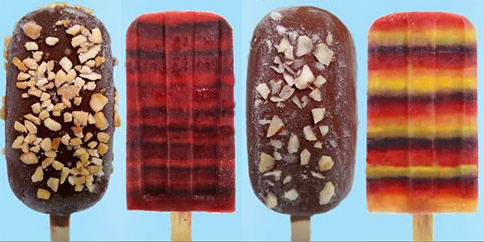 (SPOT.ph) One of Manila's go-to ice cream shops has finally released their summer line. Sebastian's is teasing our taste buds with a delectable spread of bars via social media.

Just like last year, ice cream maven Ian Carandang is launching two lines—Truffle Bars and Fruitsicles—and just like last year, he's releasing each flavor one at a time. We're counting our blessings, though. This time, the flavors will be launched daily for one week—instead of last year's weekly torture.

The Truffle Bars are decadent dessert hybrids featuring ice cream and fudge in a crackling chocolate shell. The Fruitsicles, pretty things that they are, boast 30 delicate layers of pure flavor. According to their social media, the latter takes three days to make.

Both collections will each carry five flavors.

The unveiling began on April 6 with the release of the Fudge Overload (Truffle Bar), a luxurious triple dark chocolate combination, and the Halo-Halo (Fruitsicle), an ice pop incarnation of the beloved Pinoy dessert with the layers representing its many ingredients. Yesterday, Sebastian's released the second batch: Peanut Butter Cup and Rainbow Pop.