Filipino cuisine has arrived, according to The Washington Post 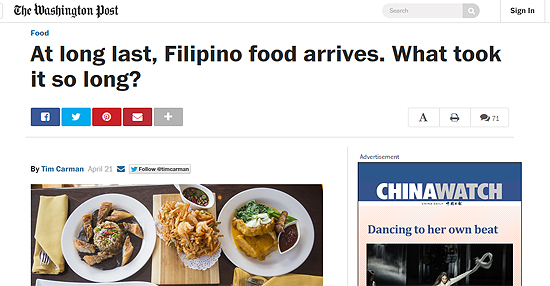 (SPOT.ph) "At long last, Filipino food arrives. What took it so long?" This is how Tim Carman starts his essay on Filipino cuisine in an article in The Washington Post published on April 21. Filipino fare has gone from balut-related dares on American reality shows to one of the trendiest cuisines around.

The report traces the cuisine's popularity back to 2012, when globe-trotting chef Andrew Zimmern bravely predicted that Filipino fare would be the next big thing. Now there are a number of restaurants in the U.S. (particularly Washington D.C.) flaunting this type of grub even in fine-dining setups.

"From Los Angeles to New York, Filipino cooking has expanded well beyond its no-frills 'point-point' eateries (the suburban outlets where diners point to steam-table dishes they want) to more refined restaurants that cater to diners who want wine, not soda, with their meals," writes Carman.

Credit for this emergence is attributed to several factors, according to the report: Paul Qui who won Top Chef 9 and now owns an eponymous restaurant in Austin; Cristina Quackenbush at New Orleans' Milkfish, as well as Amy Besa and Romy Dorotan of Purple Yam and the now-defunct Cendrillon; and even the owners of Maharlika and Jeepney.

Carman writes "hiya" or shame as the reason for the cuisine's slower pace at reaching a more global audience. Jeepney and Maharlika co-owner Nicole Ponseca says this is how Filipinos see their dishes in the U.S. setting—a sentiment echoed by Meshelle Armstrong, wife of Restaurant Eve chef Cathal Armstrong. In the report, Armstrong says, "Filipinos would feel that...no one would like the food."

But this has changed. Ponseca and her partners, as chronicled in The Washington Post story, began making as much noise as they could about Filipino food, and their pop-ups became Maharlika, all proudly displaying Kare-kare and Adidas (the chicken feet, not the shoe). Their second restaurant, Jeepney, only amplified this style further, with events like a balut-eating contest.

They opened a door, and in D.C. alone, there are three Filipino restaurants (Purple Patch, Bistro 7,107, and Restaurant Eve—the latter offers a Filipino menu), with three more on the way. It's only bound to snowball from there.