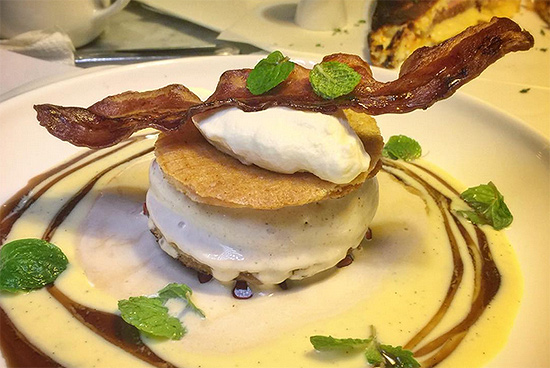 Think Chicken and Waffles, but as a dessert.

(SPOT.ph) As far as strange ice cream flavors are concerned, we've come to a point when we no longer ask "Why." The more logical question, it seems, has become "What's next?"

Apparently, "what's next" is Chicken & Waffles Ice Cream. It's a collaboration betwen Sebastian's Ian Carandang and Chef Mikel Zaguirre (Locavore and FAT), both of whom continue to push the boundaries of how they can transform food.

The Chicken & Waffles Ice Cream is a dessert conversion of Chicken and Waffles. It features Sebastian's Funky Chicken Ice Cream tucked between stroopwafels—a very thin, chewy waffle sandwich held together by a treacly filling, it's a Dutch specialty and  similar to the ones you see on the Starbucks counter. This dessert, flourished with cherry, creme anglaise, and maple-balsamic gastrique, and topped with a strip of crispy bacon, will officially launch at FAT this weekend. A serving is priced at P385.

Ian actually hinted at this creation back on June 19, when he announced via Facebook that his chicken ice cream has been approved and described it as "officially a new creative milestone."

This article has been updated to specify the ingredients and price.