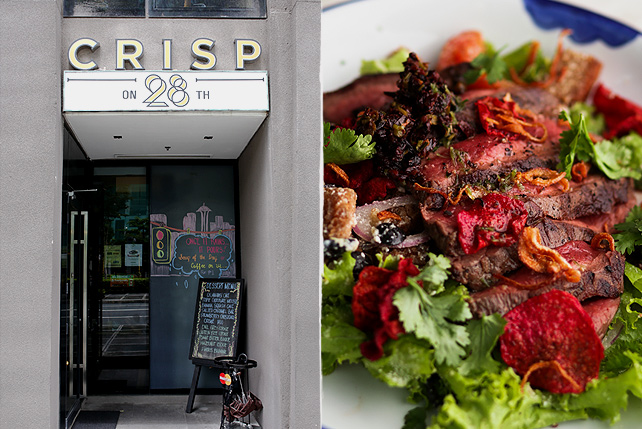 Where to get healthier sisig and chicken skin...sort of 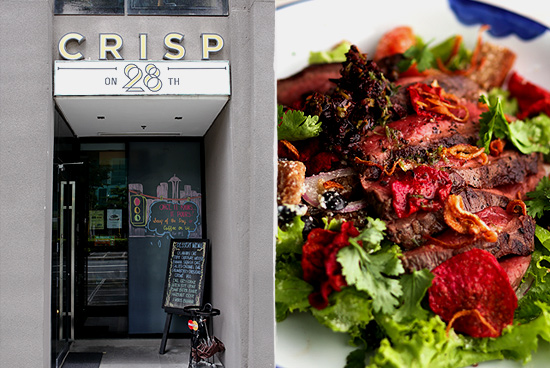 (SPOT.ph) When we first visited Crisp on 28th in 2014, co-owner Carmela Villegas Agosta described the restaurant as having been inspired by her time in Paris, where neighborhood hangouts were de rigueur in each borough.

Crisp on 28th aims to be the go-to place that people can hit up whenever they need to catch up with friends, spend lazy Sundays having brunch, or just chill and read a book while having cake and coffee—and they've clearly succeeded. The clientele mix is eclectic, ranging from families with kids to yuppies sharing dishes family-style with their colleagues. 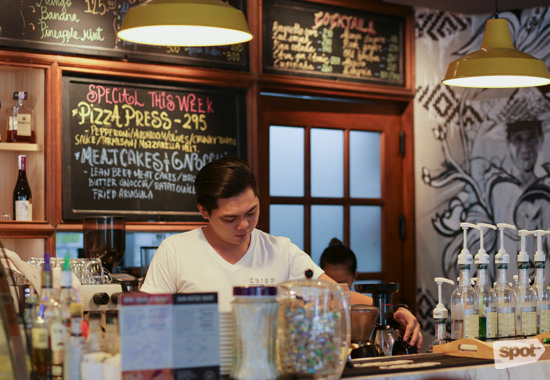 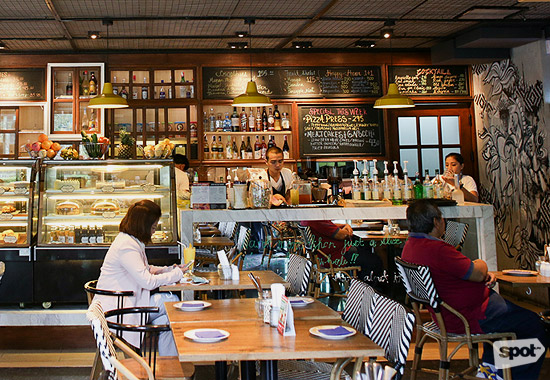 The kitchen has recently rearranged the menu, adding new stuff and updating old favorites. If you were ever a fan of the Skillet Bacon, well, you can kiss it good-bye. 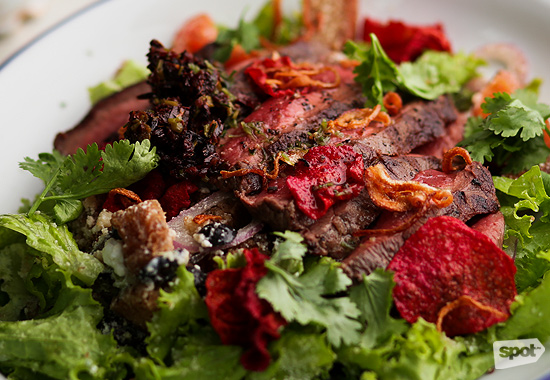 Keeping its health-inclined stance, Crisp puts their steak in a salad: the Chargrilled Flat Iron Steak (P680). Generous strips of tender steak (300 grams, flat iron), cooked medium rare, rest on a bed of complementary panzanella salad, which is like a deconstructed bruschetta. In lieu of crunchy croutons, you have soft, flavorful cubes of wheat bread drizzled with olive oil, tomatoes, and, our favorite part of the salad, thinly sliced beets fried to a crisp. This salad is perfect for the bodybuilder, or anyone looking for a low-carb, skip-the-bread, green protein fix. 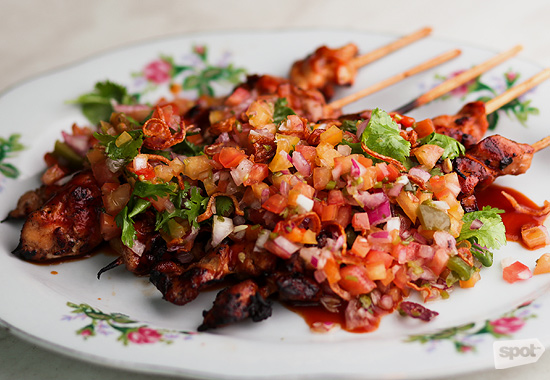 The small bites from the Chipotle BBQ Chicken Skewers (P340) are marinated just the way we like it: sweet and tangy with a hint of spice. Unlike other meat on skewers where you expect a little resistance when you pull it from the stick, the chicken slides right off and melts in your mouth. A tomato lychee salsa is an unexpected yet successful partner. 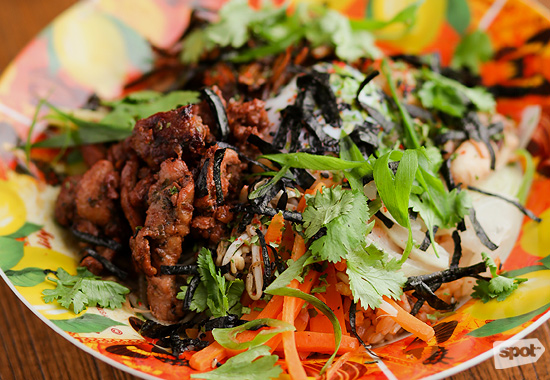 Bibimbap is the Korean version of our sinangag, except with more sahog. Traditionally, bits and pieces of leftovers are mixed and repurposed into a hearty rice bowl. Crisp's version, the Pork Bibimbap (P370), is a bit sweeter, thanks to the honey-infused gochujang, and chock-full of pork and vegetables. The rice is a healthy brown and married with kimchi. You can also order this with calamari instead of pork. 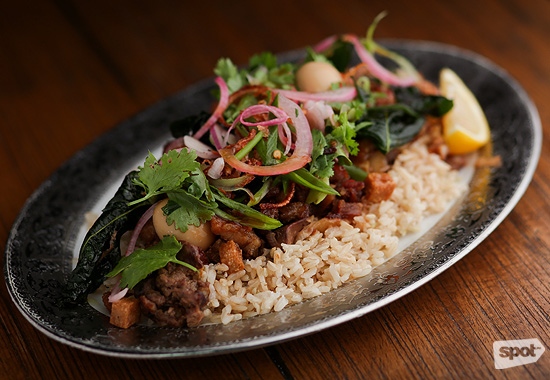 Sisig is hardly represented in restaurants like Crisp, so any attempt is quite an intrigue. Crisp's Sisig Rice (P410) is purportedly Solenn Heussaff 's recipe. The pickled quail egg is a good way to get your egg fix in the sisig without losing the crunchiness of the pork bits and the crispy kangkong. It's a mix of pork belly, pig's mask, crispy tofu, aligue coconut rice, and crispy kangkong. 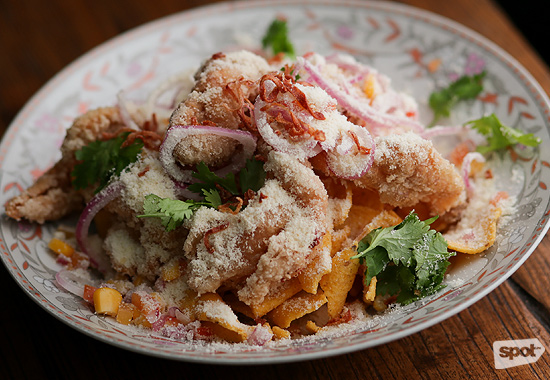 The Chicken Skin and Corn Nachos (P310) is actually served as an appetizer, but the salty, crunchy chicken skin, cheese, and nachos taste so divine together that we won't fault you if you pair it with brown rice. We did. 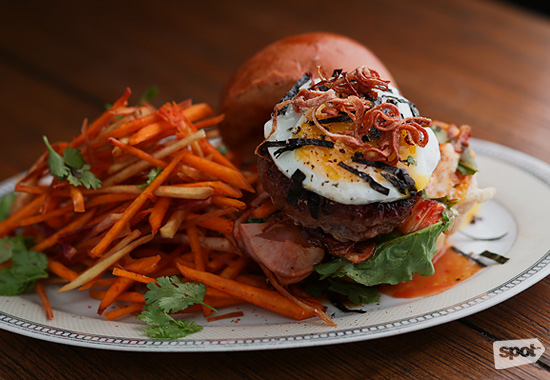 East meets west in the Asian Beef Burger (P380). The Angus beef burger gets a dose of distinctly Asian flavors from slightly spicy mayo, soy glaze nori, and Japanese pickles. The result is a harmonious blend of two cultures that we can't wait to eat again. We love the fluffy brioche bun and the zesty sweet potato fries in the side.

To finish, Crisp offers a lift in flavor with a Calamansi Cake (P160). The tartness of calamansi meets the sweetness of sansrival in this tangy sweet, buttery cake that satisfies the sweet tooth while keeping things light. 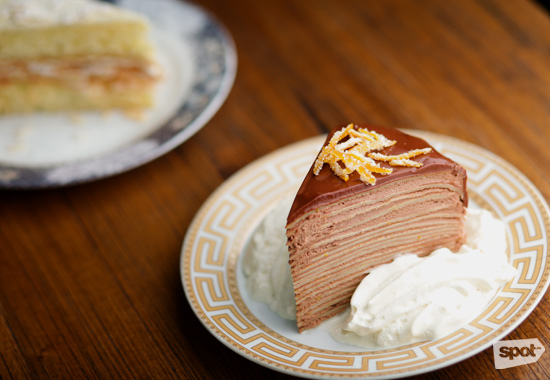 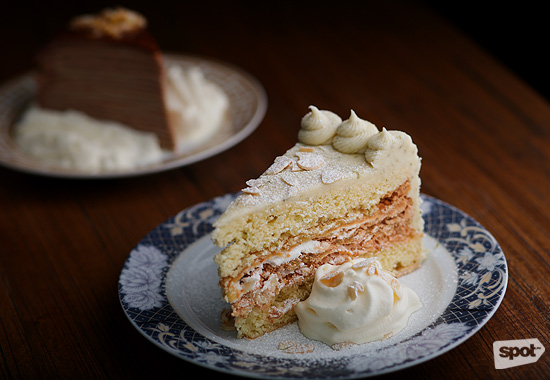 Crisp on 28th is known for playing with combinations and updating their menu more often than our habit-forming tendencies would like, but this is only the beginning. Crisp has more tricks up its sleeve, including dessert-inspired milkshakes and a "pay only piso" for a warm cup of coffee or soup whenever it's raining.

Crisp On 28th
Your Guide to Thriving in This Strange New World
Staying
In? What to watch, what to eat, and where to shop from home
OR
Heading
Out? What you need to know to stay safe when heading out