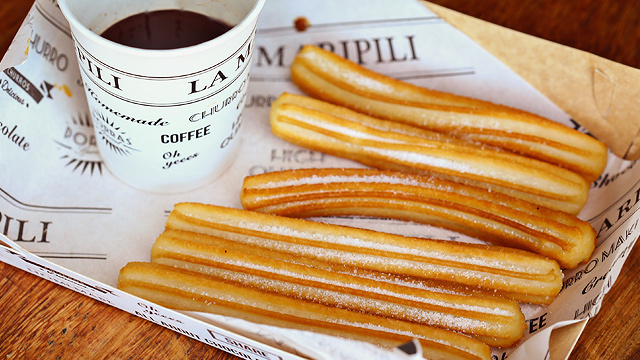 Which fried pastry came out on top?

(SPOT.ph) You’d be hard-pressed to find anyone who doesn’t love fried stuff, so it’s no surprise that churros, or fried finger-shaped choux pastries that are popular in Spain and Portugal, are such a hit in the Philippines. Many  have continued to pop up in the Metro since we did our list in 2015—and we’re not complaining. Still, that means knowing where to get the best is becoming a little more difficult. So we’ve taken it upon ourselves to judge Manila’s best churros this time around based on whether they’ve got the perfect crunchy-soft balance down pat, as well as the flavor of the fried pastry with and without the dip. The less greasy, the better, too! 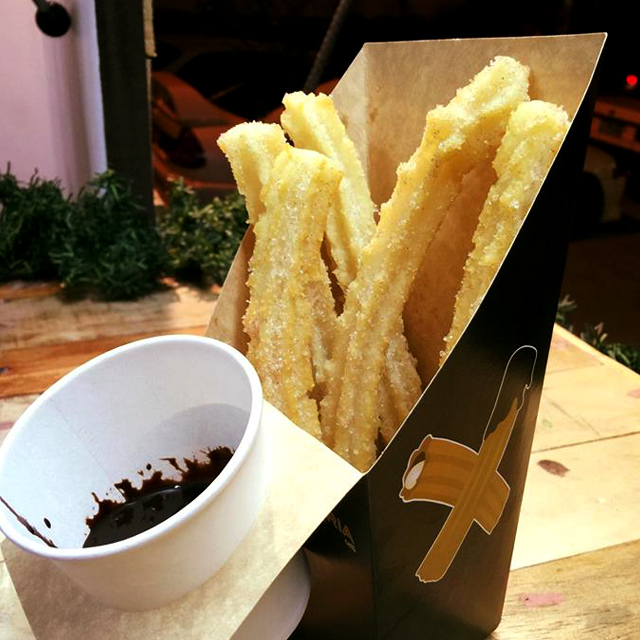 This food park stall offers a wide variety of churros, from filled to coated ones. But, for fix, their Classic Churros is enough to satisfy. This version is one of the softest of the bunch, almost melt-in-your-mouth. While some pieces can taste a little bland on their own, it's nothing a little more sugar and the hazelnut chocolate dip can't fix. 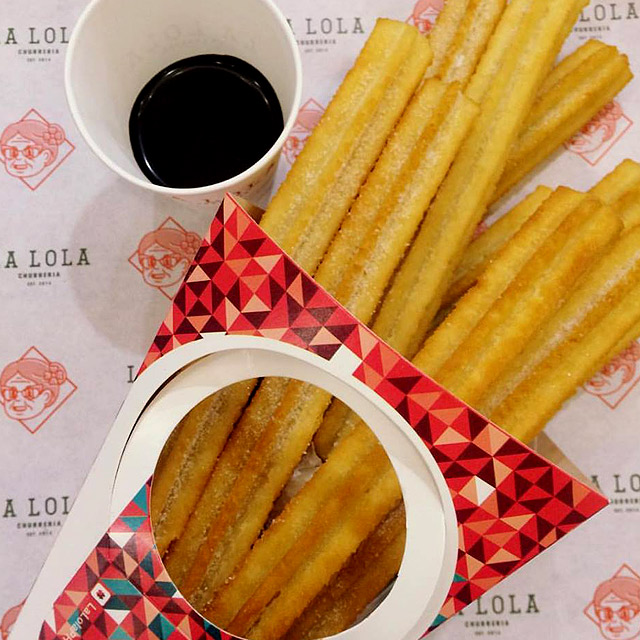 For those sudden churros cravings, you can count on Churreria La Lola and their many branches nationwide. Their Classic Churros are satisfyingly crisp on the outside, and the pastry inside is soft enough to provide a nice contrast. The only downside is these can get a little too greasy when left out in the open, so better dunk these fried fingers in the sweet chocolate dip (P60/medium, P100/large, P130/XL) and munch on them as quickly as you can. 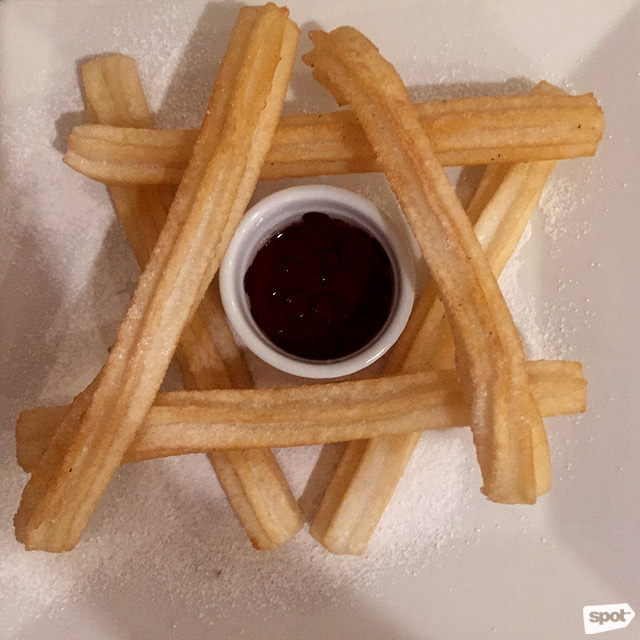 The first thing that strikes you about these churros is the not-so-subtle saltiness of each piece. It might turn some people off but surprisingly, it’s a flavor that pairs well with their milk chocolate dip. At Xocolat, chocolates are the star so of course, their dip is also indulgently good. You’ll want to coat every piece in its creamy cocoa sweetness, and maybe lick some off from a spoon (we won’t judge). 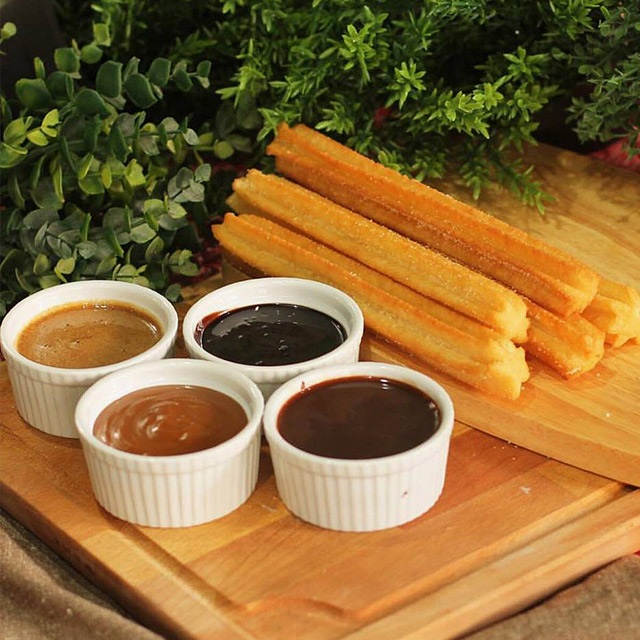 This first made waves with their churros-and-soft-serve fusions, which are extremely decadent creations that are worth the sugar rush. But even without all the fanfare, their churros do pretty well on their own. A generous dusting of sugar and cinnamon makes them even crunchier on the outside, which emphasizes their soft center even more. While we personally think they work best with the dark chocolate dip, you can also get them with matcha, Nutella, and caramel. 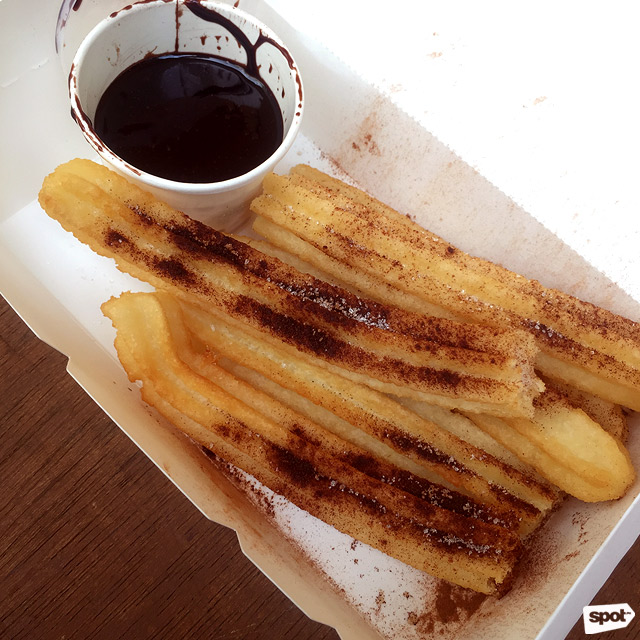 There’s something about the busy-ness of weekend markets that makes you want to get your hands on the most indulgent fried food available. Lucky for you, Don Churro is a regular at both Salcedo and Legazpi weekend markets. Served in a carton and dusted with lots of cinnamon, its simple appearance belies how tasty this treat actually is. These churros have a distinct saltiness to them—almost as if a stick of butter was mixed into their batter—that makes them so addicting to munch on. Dip your churros in their sweet milk chocolate dip, and get a lip-smacking sweet-salty combo you won’t be able to get enough of. 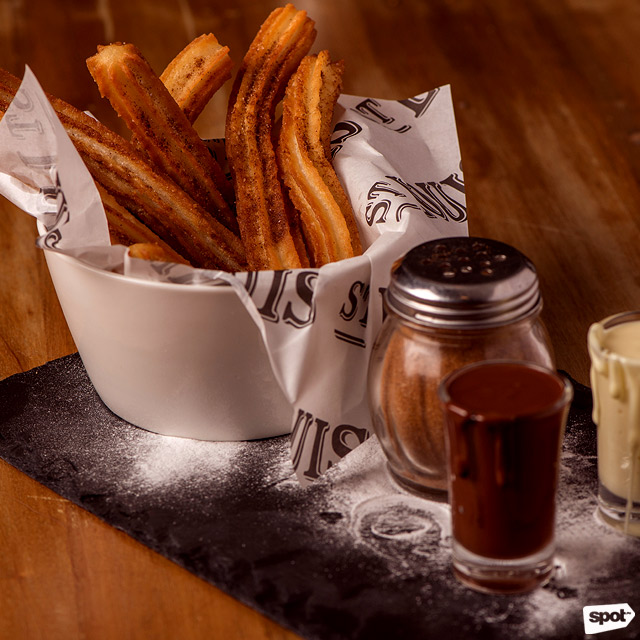 You’ll be tempted to finish off St. Louis’ churros on their own, with their light vanilla flavor that’s enhanced by a dusting of cinnamon. It helps that these fried pastries have zero hints of grease. Still, why miss out on their chocolate dip? Rich, incredibly thick, and bittersweet, it’s almost like they melted a bar of dark chocolate just for this treat. 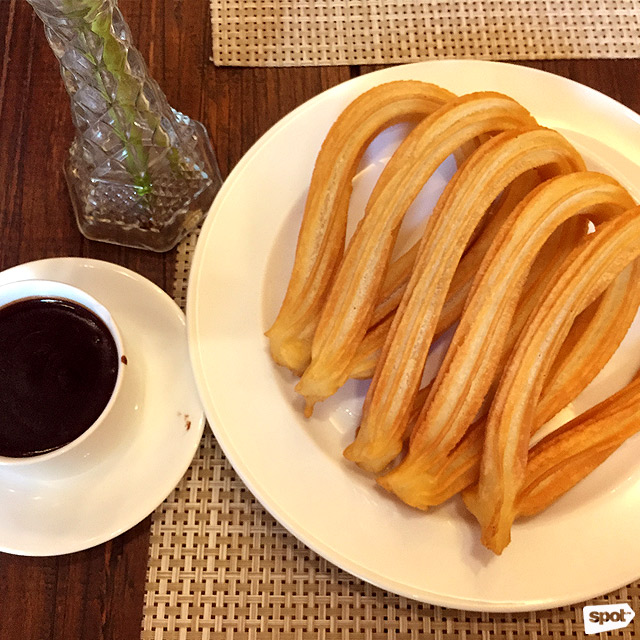 For many of us, Dulcinea’s Churros con Chocolate was our first taste of the Spanish fried pastry, and after all these years, munching on their churros still brings back those memories. But, it’s not all nostalgia with this treat. Their churros, for one, are longer than average, with a distinct crispness. They also have a lightly fried flavor but it never crosses over to “too greasy.” Their chocolate dip is rich, thick, and bittersweet—complementing instead of masking the subtle sweetness of the churros. It’s no wonder Dulcinea continues to be synonymous to churros for most people. 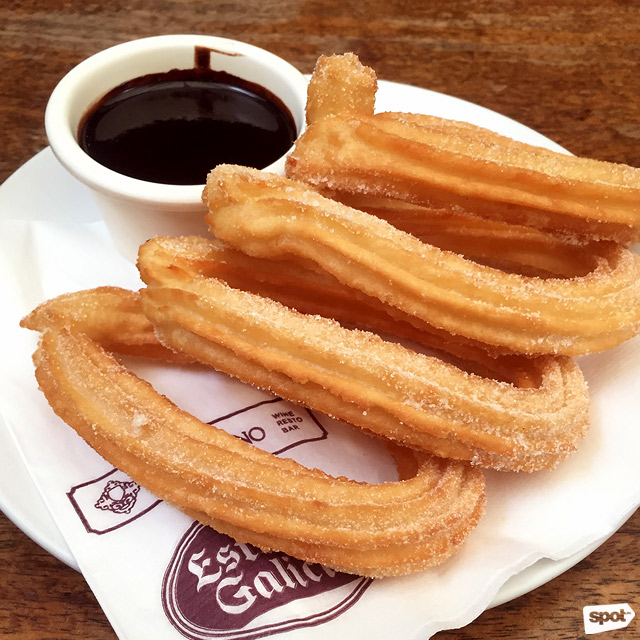 Barcino may have made a name for themselves as a tapas place, but their churros are nothing to scoff at. What’s incredible is how soft they are—airy is the word that comes to mind. But airy doesn’t mean lacking in flavor. With a generous dusting of sugar, these churros are tasty enough to be had on their own. You wouldn't want to miss out on their milk chocolate dip though, especially if you have a sweet tooth. 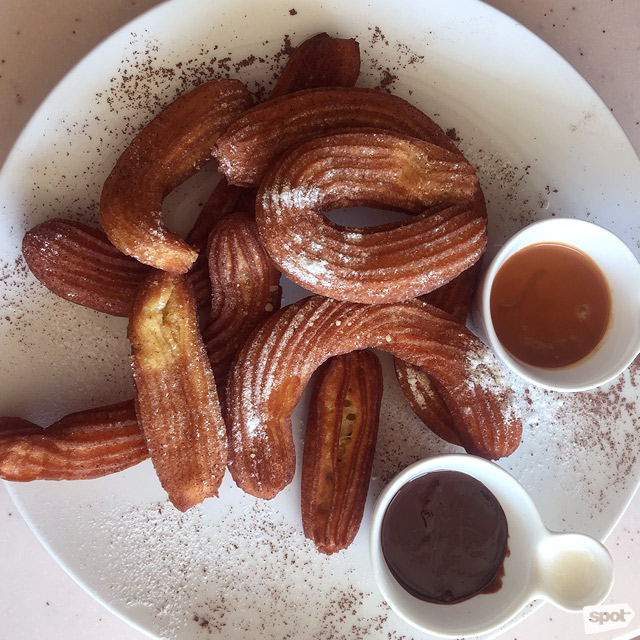 The Burger Pub’s fatter-than-your-finger churros are the definition of indulgent. Their churros are thicker than average, incredibly pillow-soft but with a crisp exterior, and taste like fried sweet dough—kind of like sweet funnel cakes. The chocolate dip is thick and sweet, but we found ourselves reaching for the butterscotch dip more, the hint of salt making it taste like salted caramel. It’s not the most authentic of the bunch, but it won’t matter once you’re licking cinnamon and sugar off your fingers. 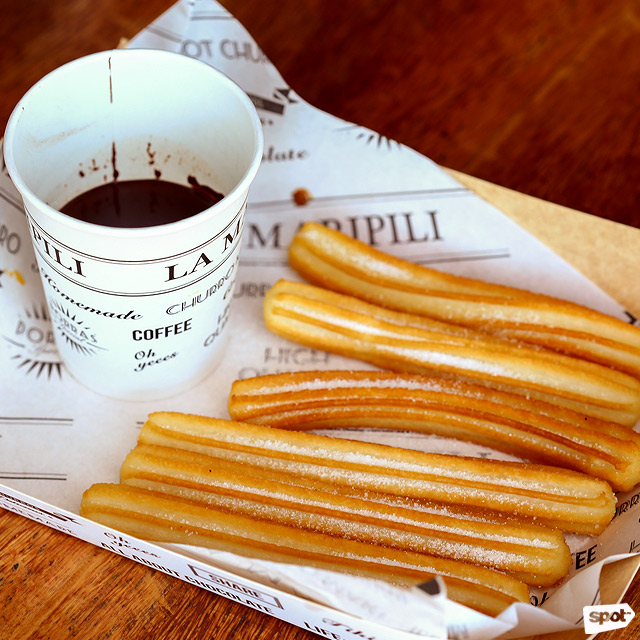 We’ll never stop thanking our lucky stars for La Maripili’s decision to open another branch in the East. Still, even if they had stayed in their quaint spot in Alabang, it’s no understatement to say that their churros are well-worth the drive. La Maripili has the balance between the crisp exterior and soft interior of a perfectly-fried churro down pat. Each piece starts with a resounding crunch, then you get to the soft, almost melt-in-your-mouth center. With a subtle vanilla flavor, they’re tasty on their own, but you have to get them with the rich, dark Hot Chocolate (P110)—thick enough to serve as a dip, but also thin enough to be drinkable. And you’ll want to drink this “dip”—comfortingly rich and with the perfect balance between dark and sweet, it’s the cherry on top of the proverbial cake.

Churros Churreria La Lola Xocolat Llucia Churreria Don Churro St. Louis House Of Fine Ice Cream & Dessert Dulcinea Barcino The Burger Pub La Maripili Top 10 Best Manila Dessert Xurreria Cafe
Your Guide to Thriving in This Strange New World
Staying
In? What to watch, what to eat, and where to shop from home
OR
Heading
Out? What you need to know to stay safe when heading out