Buca Di Beppo Is a New Italian Chain From the U.S.
Loading
Already a member? Log in
No account yet? Create Account
Spot.ph is your one-stop urban lifestyle guide to the best of Manila. 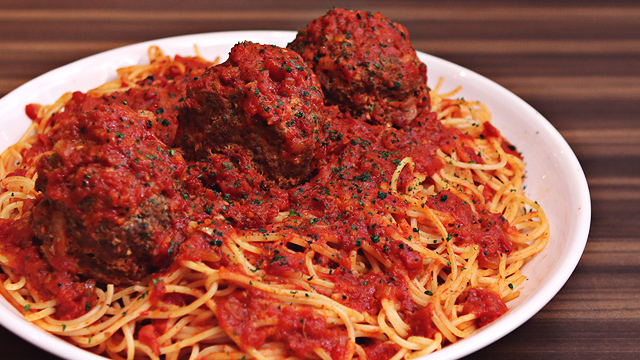 Sneak Peek: From Decor to Food, Buca Di Beppo Is Larger Than Life

Restraint is nowhere in this Italian resto's vocabulary.

(SPOT.ph) In a sea of trendy minimalist eateries with streamlined décor, Buca di Beppo stands out effortlessly. From its doorway, with a neon signage and two faux-marble statues, this U.S.-based Italian restaurant lets you know they are kitsch and proud of it. 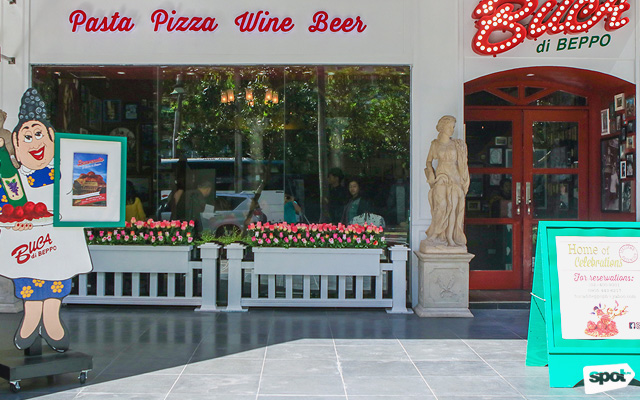 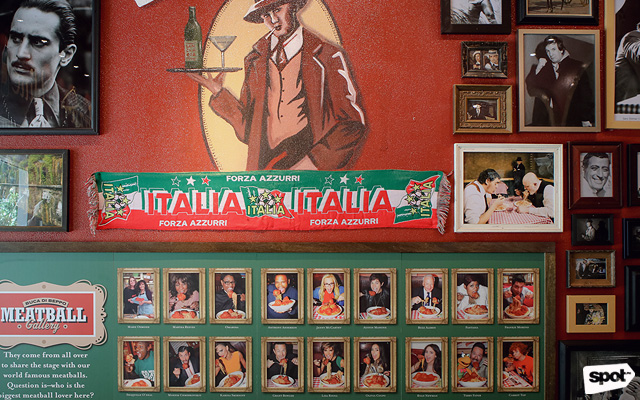 If you thought the first floor, with vintage photos plastered on walls and plastic grapes hanging from a mock vineyard near the bar, was already extra AF, brace yourself, because it gets even more chaotic in the bigger dining area upstairs. Photos of Italian-American life from the 1940s and ‘50s, vintage advertisements, and blown-up pictures of Hollywood celebrities fill the walls, and any space that isn’t covered up has murals painted on them. Red and green fairy lights hang from the ceiling, and Greek-style statues stand on almost every corner—the result is dizzyingly colorful and bursting with energy, which gets you extra excited for the food that’s about to come. 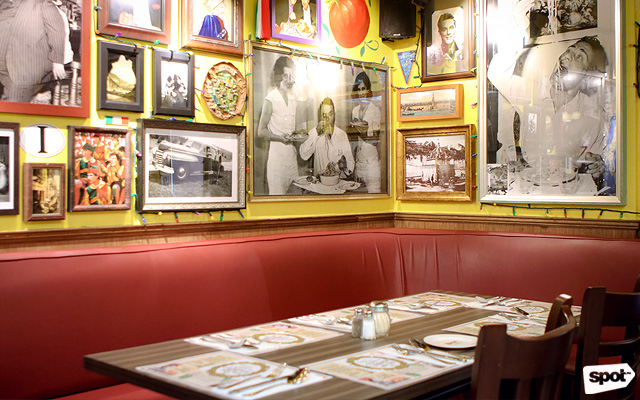 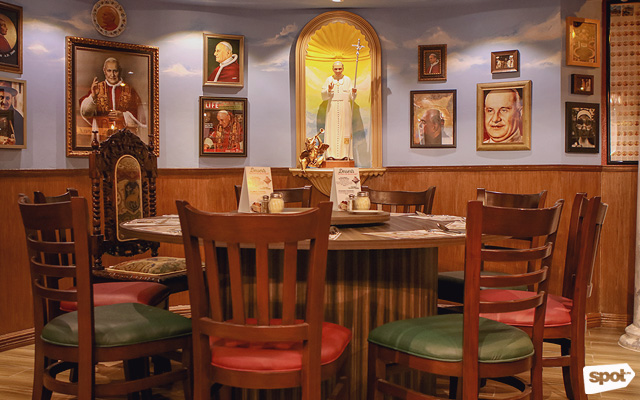 No Buca Di Beppo branch is complete without the Pope Room!

Not that you need the extra encouragement; it is hard to dislike pasta. And if you enjoy classic home-style Italian cooking, you’re in the right place. Buca di Beppo literally translates to “Joe’s Basement” (Beppo is a lesser-known nickname for Giuseppe); after all, their first branch was at a basement of a Minneapolis apartment which opened in 1993. Since then, Buca di Beppo has opened over 100 branches worldwide, all channeling the 1940’s life of an average Italian immigrant, from the over-the-top décor meant to resemble the basement of an Italian-American home to the family-sized servings.

“The recipes here are exactly the same as the ones we use in Buca di Beppo [branches] all over the world,” shares of house trainer Alex Montes, who flew in from the United States for Buca di Beppo’s first Philippine branch. “Everything we serve is meant to be shared.”

“The tomato sauce, for example, we had to bring that in from overseas,” adds Marcelino Florete Jr., who brought Buca di Beppo to the Philippines. “We had to bring it in because it’s a special sauce that’s custom-made for Buca di Beppo.” 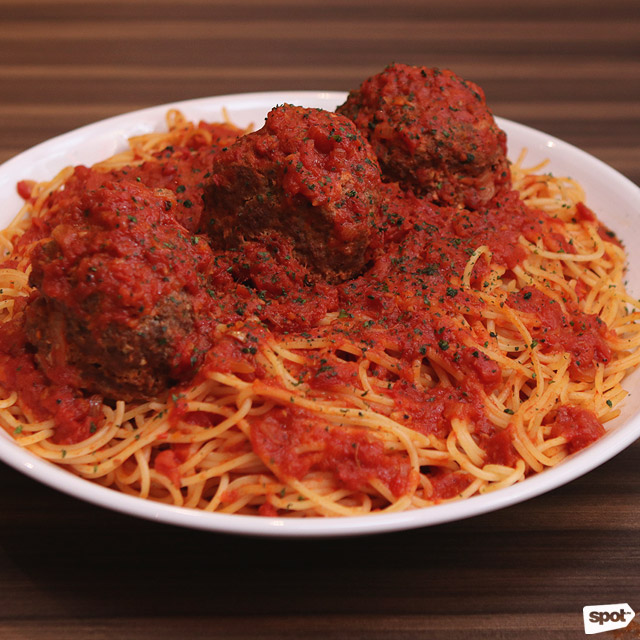 The sauce shines in the Spaghetti and Meatballs (P455/small, P995/medium, P1,595/large), its subtle sweetness with a hint of acidity letting you know that you’re getting nothing else but fresh tomatoes here. If the décor didn’t already clue you in, this dish lets you know restraint isn’t anywhere in Buca di Beppo’s vocabulary. With a sauce that’s overloaded with ground beef to the point of and peppery meatballs that are almost the size of a fist on top of al-dente noodles, this dish is classic Italian spaghetti as it can get. 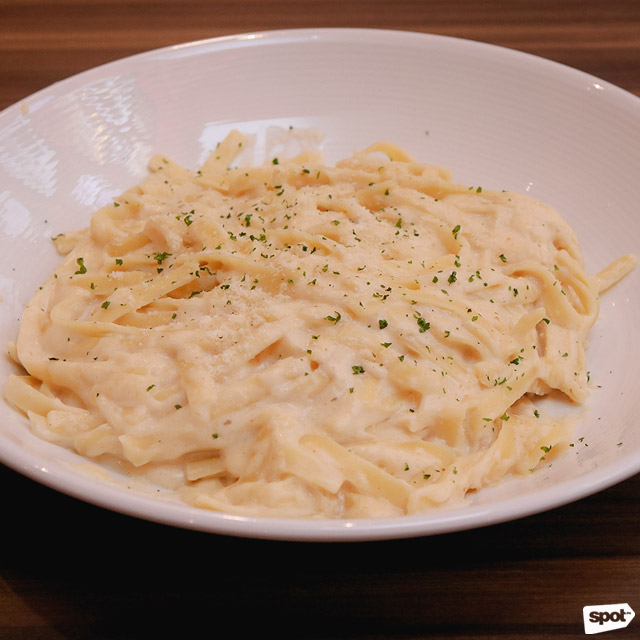 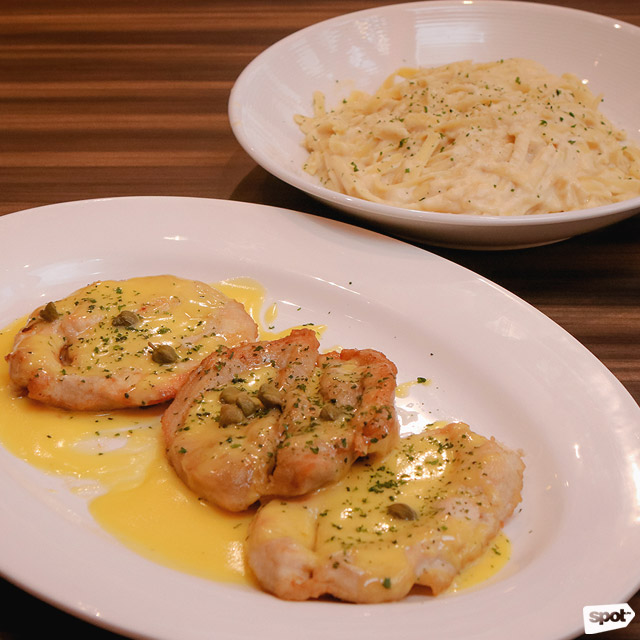 The Chicken Limone (P655/medium, P1,185/large) isn’t just an easy way to add protein to your feast. Lean and tender chicken fillets are covered in a lemon-butter sauce that’s so tangy, it’s sure to wake up your palate. Pro-tip: The zest pairs well with the creaminess of the Fettuccine Alfredo!

Leaving space for dessert at Buca di Beppo is no easy feat—when they say their servings were meant for sharing, they were not kidding. Though Alex says they’ve adjusted the portion sizes a bit for the not-so-big appetites, their medium portions can easily feed the average family. 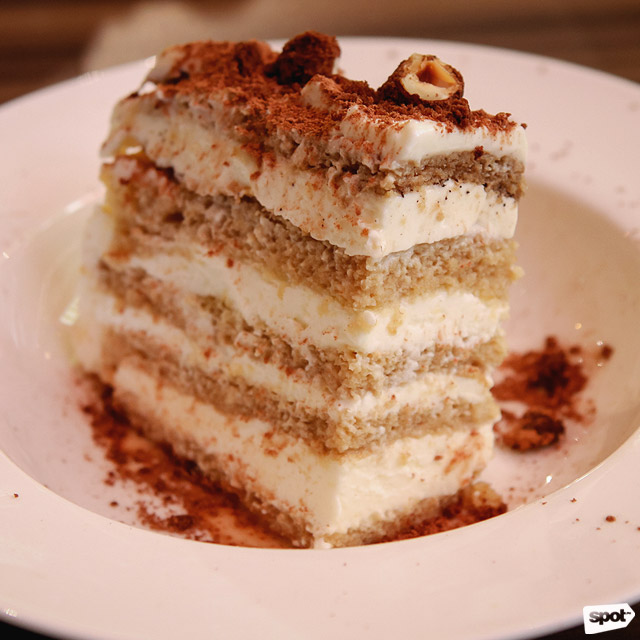 Still, do try, if only for the Tiramisu (P325). With ladyfingers soaked in a mix of espresso and rum, this dessert doesn’t promise delicate flavors, only a hard-hitting dark bittersweet taste that’s balanced out by layers of mildly sweet mascarpone cream. Cocoa and hazelnut biscotti add crunch and a little more decadence.

While fancy fine restaurants will always have a special place in the food scene, it’s also nice to know that there are restaurants like Buca di Beppo that don’t take themselves seriously—except of course, for their cooking. So sit back, relax, and enjoy the madness with one or two of their fist-sized meatballs.

Bgc Pasta Buca Di Beppo Italian Bonifacio Global City
Your Guide to Thriving in This Strange New World
Staying
In? What to watch, what to eat, and where to shop from home
OR
Heading
Out? What you need to know to stay safe when heading out