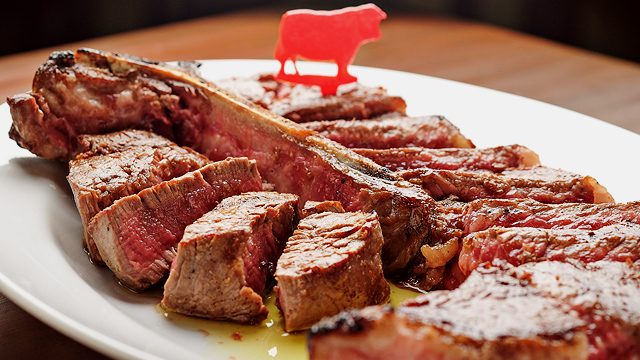 They're still as good as the first time.

(SPOT.ph) Opening another branch of anything is no easy feat—imagine opening your 21st. But that’s exactly what Peter Zweiner did, opening Wolfgang’s Steakhouse at One Bonifacio High Street Mall, the 21st for the brand globally and the third in Manila.

Though Wolfgang’s seems to open branches one after the other, each one has its own personality that matches the neighborhood it’s in. For the BGC branch, the vibe is bright and sun-lit, with floor-to-ceiling windows, colorful tiles, and photos of the first Wolfgang’s branches done in pop-art style. Though certain design elements common amongst all branches are still around, like the dark-wood bar and chandeliers, the atmosphere is miles away from the more dramatic mood of the Podium and Resorts World outposts.

“When you design a restaurant, even though this is number 21, we don’t want to become a cookie-cutter restaurant,” shares Zweiner. “We want each location to have its own personality that matches their location.”

Opening Wolfgang’s Steakhouse in Bonifacio Global City is a culmination of a dream several years in the making. “It’s funny because I started coming to the Philippines six years ago, and the first location I wanted to open at was in Bonifacio Global City,” he shares. “And in six years, BGC has really changed dramatically. I could see this was the place to focus on, and our goal is to find a location here.”

But even before Wolfgang’s Steakhouse BGC officially launches, Zwiener already has plans to open more branches in the future: “We spoke about opening locations in Cebu and Boracay. The option’s always there but with every opening, we always say, ‘Let’s focus on this one first.’ Let’s first make sure that the new branch is up to the caliber rather than focusing on how many we’re opening.”

While Zweiner wants the branches of Wolfgang’s to be distinct from each other, keeping the food consistent is a must for him. “When you have a brand, you want to make sure that when people come in, they’re getting Wolfgang’s,” he explains. “We try to keep the consistency of the menu alike. If you tell me the steak’s better in Ortigas or better here, I’m gonna go ‘There’s something wrong there.’”

It’s a difficult task, considering they have 21 restaurants all over the world, but the secret lies in their commitment to using only the best produce, no matter how much of a hassle it could be. For their steaks, they only use USDA-certified Prime Angus or Black Angus, which they ship to every branch chilled from the United States. They also only source their beef from the same ranches, so you get the same high-quality steak whether you’re dining in New York, Tokyo, or Bonifacio Global City.

Dry aging for 28 days in a special aging room keeps their cuts like the Porterhouse (P5,988/for two, P8,888/for three, P11,888/for four) savory and flavorful even without additional seasoning. A proper sear gives it a nice, slightly charred crust while keeping the center as tender as your preferred doneness requires. It’s worth every buck you pay for it—though Wolfgang’s serves their steaks, family-style so everything is easily shareable by a group.

Pair your steaks with their sides—while you can’t go wrong with the sinfully rich Creamed Spinach (P498) or the tasty-on-its-own Steak Rice (P488), get the Lobster Mac & Cheese (P989) for the ultimate indulgence, with the extra gooey macaroni and cheese hiding sweet, tender lobster chunks.

While Zweiner is committed to keeping the core menu the same across all branches, he’s open to introducing branch exclusives. “In Japan, we have four locations, and in Roponggi we have a beef stew that we don’t serve in Marunouchi even though it’s only around two miles away,” he shares. “It can be fun to only have something you can only get at this location.”

Those plans may take a while to come into fruition, however. The steak at their new branch in Bonifacio Global City is exactly how you would have it in any of their branches: Juicy, flavorful, and just on the right side of indulgently succulent. In a world where not much is as reliably consistent, Wolfgang’s Steakhouse has the back of every steak lover.