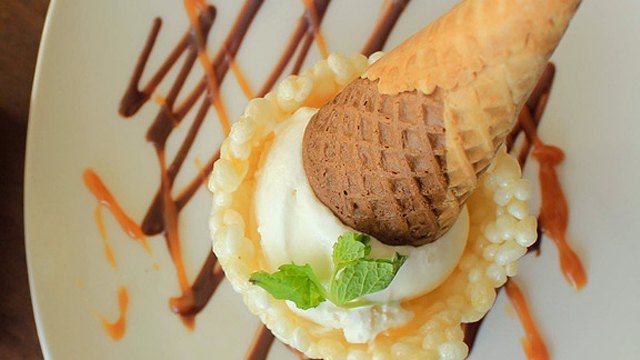 Sampaguita, Kalabasa, and Other Fun Flavors Await at This Local Ice-Cream Shop

Papa Diddi specializes in making ice cream from locally sourced ingredients. That means all of their ingredients are inherently familiar to many of our taste buds or at the very least, our senses.

One of its more unique flavors is the White Summer Lei ice cream. This is the ice cream shop's Davao white chocolate ice cream infused with the scent and aroma of the national flower, the . If you're worried that the powerful scent of the flower might overwhelm your senses, don't worry. The creaminess of both the white chocolate and the carabao milk temper the floral notes to create an ice cream that's rich in flavor, and surprisingly, refreshing.

The Blue Butterfly, another summer flavor made from Papa Diddi's carabao milk ice cream, is infused with tea made from the dried leaves and petals of a color-changing flower, changing it into a pretty pastel-blue ice cream. The dried blue butterfly pea flowers give its light blue color and it tastes just as light as its color suggests, but it also has hints of tea flavors from the dried pea flower leaves.

If you love nutty flavors, then the Honey Sunflower Seed ice cream is what you should try. Sweet honey-flavored ice cream is the perfect foil to nutty sunflower seeds. What makes this ice cream particularly flavorful is the fact that the sunflower seeds have been toasted and then coated in honey, creating a full-flavored taste. It's fantastic when served as an affogato.

The other three flavors available this summer are Manguavo, a mango and guava ice cream combo that's delicious pressed into a brioche bun; Squash Blossoms, a kalabasa-infused ice cream with a hint of cinnamon; and Roselle's Embrace, a hibiscus flower-infused ice cream with a hint of tanginess offset by chunks of salty-sharp cheddar cheese. A seventh flavor for the summer is exclusive to its  subscribers only and won't be available in its shops.

Papa Diddi's Handcrafted Ice Cream Ice Cream Summer
Your Guide to Thriving in This Strange New World
Staying
In? What to watch, what to eat, and where to shop from home
OR
Heading
Out? What you need to know to stay safe when heading out