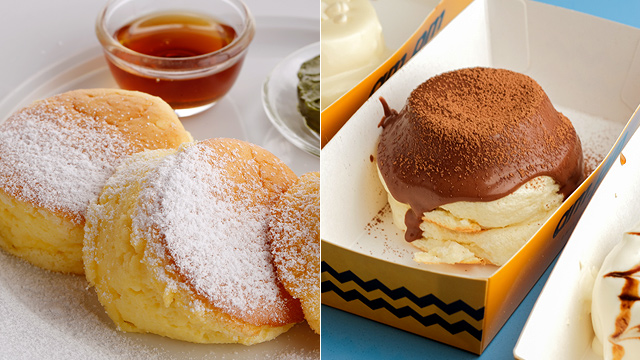 Trending: All the Places Where You Can Try Soufflé Pancakes in Manila

Know where to go for these fluffy treats!

(SPOT.ph) Pancakes are great as they are, but right now, Manila’s going crazy over a specific kind of flapjack: soufflé pancakes, which marries the golden-brown top and mild sweetness of pancakes with the fluffy, airy consistency of a soufflé, thanks to the use of a highly aerated batter (usually from the use of whipped egg whites). This particular style is especially famous in Japan, but it has since caught the eye of the rest of the world—the Philippines included.

There are a couple of theories on its roots. Some speculate that they were inspired by anime series Crayon Shin-Chan, whose titular character is said to have a soufflé pancake-like appearance; others claim it hails from Hawaii, first served in the ’70s by an establishment called Eggs ‘n Things, which then expanded to open branches in Tokyo in 2010 and soon became a hit in the Land of the Rising Sun.

More than being totally 'grammable, they offer a much lighter, more delicate pancake experience that’s versatile enough to go with just about any flavor combo you can imagine. Here, we’ve rounded up all the places where you can order it in the Metro.

Here’s where you can find soufflé pancakes in Manila:

The Japanese cheese biscuit and soft-serve brand has finally opened their own café, and the star of their menu are their melt-in-your-mouth Japanese pancakes. They’ve got something for you no matter what your mood: try the Summer Berry Pancake (P315) with a mixed berry compote and nama cream if you’re after something lighter, or the Crème Brulee Pancake (P265) with a sweet-salty vanilla anglaise and torched sugar for a more decadent bite.

Coming from the same owners as Japanese-French establishment Epilogue, Prologue serves an extensive breakfast selection, among which is their take on Soufflé Pancakes (P350). This version toes the line between breakfast and dessert, coming with mixed berries, chantilly cream, homemade granola, raspberry sorbet, and bourbon vanilla.

This establishment specializing in all things soufflé was one of the first to introduce the pancake style in the country. Have it your way: plain (P180), with matcha (P180), matcha red bean (P345), cream cheese (P220), strawberries and cream (P325), or mangoes, almonds, and cream (P325).

This Japanese brand is finally on our shores, and they’ve got pancakes of all sorts—including some seriously towering soufflé variants that go by the name Premium Pancakes (P385/stack of three). It’s made in small batches, however, which means they’re only served at certain times of the day (11 a.m., 3 p.m., and 6 p.m.)—so set those alarms!

The Philippine pancake favorite has recently branched out of their regular flapjacks and launched their own version of Soufflé Pancakes (P150) at the Tomas Morato, Bonifacio High Street, Burgos Circle, Magallanes, Rockwell, and Molito branches. You can have enjoy them plain with powdered sugar, or have them with blueberries, bananas, or mangoes for an additional P40. Either way, they’re just about perfect paired with coffee.

Hailing from the Shilin Night Market in Taipei, Puffy’s opened up shop at SM North Edsa in 2019. Their take on soufflé pancakes is made to order and comes in fun flavors like Chocolate (P140), Creme Brulee (P140), and even Milk Tea (P140) in addition to the Original (P140). If the hankering for sugar is especially strong, you can have the pancakes with ice cream for an additional P15, or paired with one of their special drinks like the Classic Pearl (P80) or the Wintermelon Tea (P110).

More than izakaya-style eats, Motto Motto serves up all-day brunch specials with a Japanese twist. Their Soufflé Pancakes (P250) will wake you up no matter what time of day, coming with three fluffy cakes, matcha butter, maple syrup, and whipped cream on every plate.

Hong Kong dessert spot am.pm opened their shop here in the Philippines in 2019, and more than great soft-serve, they’re also known for their soufflé pancakes, which are as picturesque as they are totally tasty. The Original (P145) is worth a try on its own, but make space for the Crème Brulee (P210) variant—it has pancakes topped with a caramel sauce which they then torch for a welcome smokiness.