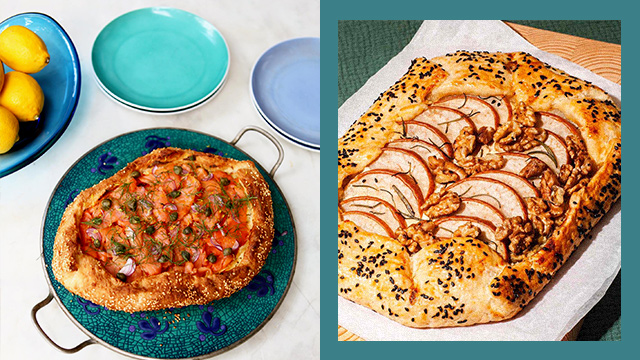 There's the Asian-inspired Leek Galette with wasabi mayo, and queso de bola, for one.

(SPOT.ph) Pie is a well-loved pastry for how it pairs a crust with a savory or sweet filling. But have you met its more rustic cousin, the galette? Galette is a French term that refers to a flat, round cake and has a couple of variations; today, it's most commonly used to refer to the free-form, pie-like baked treat. It's similar to pies and tarts in that it's got a crust and a filling, but in a flatter, less-uniform package. One online seller's takes in particular have gotten the local food world buzzing: Meet Mise's homemade galettes!

Owner Selina Ocampo hails from a family of designers and thought she'd embark on a similar path, but ended up feeling that it wasn't for her. "I was overcome with this feeling that this is not me, what am I gonna do... it was really tough," Ocampo admits. With her dad's encouragement, she went the culinary route instead, enrolling in the International Culinary Center in New York and apprenticing in New York establishment Tuome. Along with friends, she eventually started Manila House (where she was the Head of Research and Development), and was mentored by Chef Gilbert Pangilingan (of Kai fame); Ocampo also ran a kitchen consultancy service on the side.

Fast forward to 2020, the pandemic hit—and Ocampo found herself jobless. With that, Ocampo started cooking for fun at home, but was worn out with all the preparation, chopping, washing, and other kitchen processes involved. "I was like, wow, I'm exhausted," she admits. But it's exactly that sentiment that propelled the launch of Mise. The concept gets its name for the first word in the French term mise en place, which refers to setting out all the ingredients and tools needed to make a dish before diving into actually cooking it—and the goal is to help people prepare food at home with their vacuum-sealed, ready-to-heat eats and meal kits. "Everyone deserves to eat well," she says.

Mise is best known for their galettes—despite Ocampo's admission that pastry is a weak point of hers. "I'm not very... meticulous in the sense of how bakers are," she says. She became "obsessed" with the dish as she was taught to make it by a baker friend she'd regularly cook and bake with. "I was making it so much during [the enhanced community quarantine]," says Ocampo.

The majority of Mise's galettes come vacuum-sealed, for you to reheat in your oven and assemble fresh—which also lets you enjoy the different flavors and textures as they're intended. Also worth highlighting is their one-of-a-kind flavor lineup, which includes both sweet and savory variants—as well as those that are in between. After all, Ocampo describes her flavors as being "playful thoughts"—some of the entries in their lineup are more straightforward and play on classic pairings, given her own signature spin; others are more fun and contemporary.

You've got a couple of different options, but you can't go wrong with the Goat's Cheese Galette (P1,000), which combines creamy, tangy Malagos goat cheese with caramelized onions, honey, and sea salt on a biscuit-like polenta crust. Like it zingy? Try the Leek Galette (P900), which showcases Asian influences with its combo of leeks, spring onions, wasabi mayo, and queso de bola on their original crust, and accompaniments of a green-goddess dressing and chili-peanut crisp.

For a quirky bite, try the Pear Galette (P1,200), which plays on the classic pear-walnut-goat cheese pairing, but gives it an earthy twist with sauteed leeks underneath—yup, it works! It's also one of the few variants that are ready to eat once you receive your box. And if you're all about them 'shrooms, try the Mushroom Galette (P850) with earthy shiitake mushrooms, onions, and homemade Boursin cheese on their original crust.

Ocampo also pays tribute to her time spent in New York in the Salmon Galette (P900), which has Mise's own house-cured salmon with cream cheese, tomatoes, red onions, capers, and their sesame crust! There are dessert galettes too, like the Pineapple Galette (P900), which presents the tropical fruit in a richer light with fresh pineapple jam, toasted walnuts, cream cheese, and honey cream on their original crust.

Beyond galettes, you'll find other sweet and savory eats that are either frozen or ready to be reheated and/or assembled at home. The Cold Ginger Peanut Soba (P700/good for two) makes a fresh and cooling bite on a hot day, with soba noodles, shimeji mushrooms, radishes, cherry tomatoes, cucumber, arugula, and sesame seeds with a ginger-peanut dressing to tie everything together.

The Walnut Feta Smashed Potato (P500/good for three to four) takes you on a flavor rollercoaster with smashed potatoes, a savory-sweet walnut-date crumble, Malagos goats cheese, dill, and lemon. There are other must-try desserts as well, like the Almond Brittle Cheesecake (P1,450)—a bright lemon cheesecake with a peanut-graham crust and almond brittle shards for extra sweetness and crunch.

Mise Galettes Meal Kits Online Seller Savvy Seasoned Tpc-000001 Cvd Services Directory Food Delivery New Normal Foodie Greener
Your Guide to Thriving in This Strange New World
Staying
In? What to watch, what to eat, and where to shop from home
OR
Heading
Out? What you need to know to stay safe when heading out