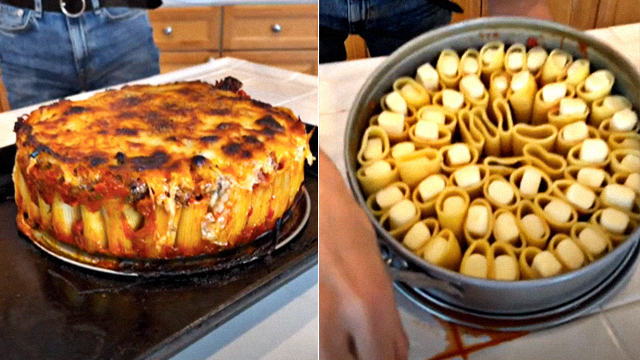 Another Insane Pasta Dish Is Trending and the Internet Is Divided

(SPOT.ph) In February, people all over the Internet were turning on their ovens to make the trend known as baked feta pasta. This time around, another pasta dish has been making it around TikTok, albeit with more polarizing results. It’s dubbed honeycomb pasta—and while some love it, some aren’t exactly impressed.

Here's what you should know about honeycomb pasta.

Honeycomb pasta involves rigatoni (a kind of tube-shaped, ridged pasta) that’s made to stand vertically—i.e. with the tubular openings facing up (heads up, trypophobics)—in a round cake pan. Each rigatoni tube is stuffed with cheese, then topped with tomato sauce, meat, and more cheese before being baked.

The dish rose to fame on TikTok, with one especially popular version uploaded by TikTok user Anna Rothfuss (who goes by @bananalovesyoutoo). As of writing, the short video clip has gotten 12.4 million views, a million likes, more than 20,000 comments, and almost 250,000 shares.

Fame aside, Rothfuss’ video hasn’t exactly won everyone over. If the honeycomb pasta description sounds familiar to you, that’s because it’s very similar to good ol’ baked ziti or lasagna—just in another form and with another name—and some have pointed this out.

Others have called blasphemy on the fact that Rothfuss used prepackaged ingredients.

Some rather detail-oriented folks are questioning Rothfuss’ choice of apparel while preparing the recipe.

Others also bring up that Italians wouldn’t be impressed.

And for others, it’s simply “cursed”.

Another thing to note is that it's also not entirely new—there are similar recipes for what is called rigatoni pie that go back as early as 2017.

Still, it does have its fair share of fans—or at least people saying it’s not that bad.

American news website Today also posted about their attempt on the dish, with writer Terri Peters sharing that despite its similarities to other pasta dishes, it has a “flavor and texture all its own—with the crispy cheese holding everything together like a pie crust.”

Issues aside, we say honeycomb pasta is at least worth a try—it features a no-fail combo of pasta, sauce, and cheese, and anything that gets more people cooking is always a good idea.

Honeycomb Pasta Pasta Food Trends Trending Adventurer Savvy Tpc-000001 Staying In Tiktok
Your Guide to Thriving in This Strange New World
Staying
In? What to watch, what to eat, and where to shop from home
OR
Heading
Out? What you need to know to stay safe when heading out