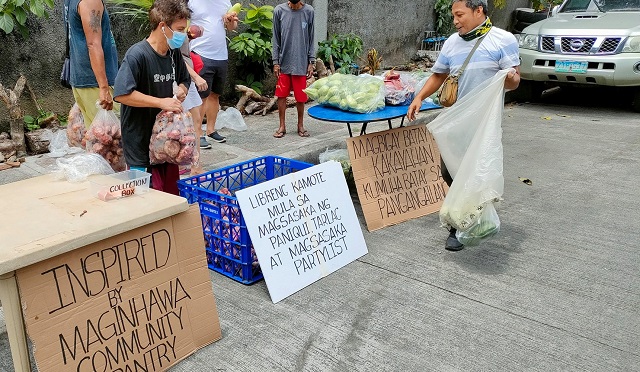 More Community Pantries Have Popped Up Following the Maginhawa One

At least two more have been spotted!

Beside Mang Tootz Food House near Padre Noval Street in Sampaloc, Manila now stands another small food pantry open for the people in their community. This effort was inspired by the Maginhawa community pantry, according to the post of Jeruthielle "Toots" Vergara—which has around 2,300 shares as of writing. They also used the "Magbigay ayon sa kakayahan. Kumuha batay sa pangangailangan" message spotted on Non's cart.

Meanwhile, in front of 34 Matiyaga Street in Quezon City—near the OG Maginhawa effort—is another community pantry put up by farmers from Tarlac and the Magsasaka partylist. They set up a few tables with free root crops and other vegetables from farmers in Paniqui, Tarlac. Spot the same message on display.

The partylist's HQ is right along Matiyaga Street, head of special projects Asiong Lim, explains in another exchange with SPOT.ph. In 2018, they started an initiative to buy produce from farmers that were bound for landfill "because traders are offering pamatay na presyo." During the lockdown, they opened up rolling stores in different barangays across the Metro with produce from farmers as well as donated to different community kitchens—and it just so happens that one of the people they donated to include Non's mother, Zena Bernardo, who runs community kitchens in Marikina. This is how they "were inspired to replicate" the community pantry.

The recent two-week ECQ in NCR+ left nearly 1.5 million people jobless, according to the Department of Trade and Industry. The shift to MECQ allowed for only around 500,000 of that number to go back to work. Seemingly small efforts like this may not be able to solve such huge problems, but at the very least it will give some hope to those who are not sure where their next meal will come from.

As Non pointed out in the interview with SPOT.ph, you can certainly start your own community pantry effort—and these two more pantries definitely prove it's possible to do so.

If you would like to learn more about or help with the Matiyaga Community Pantry project, you may contact Asiong Lim through 0921-302-2864.

Adventurer Savvy Food News Community Pantry Staying In Metro Manila Manila Quezon City
Your Guide to Thriving in This Strange New World
Staying
In? What to watch, what to eat, and where to shop from home
OR
Heading
Out? What you need to know to stay safe when heading out