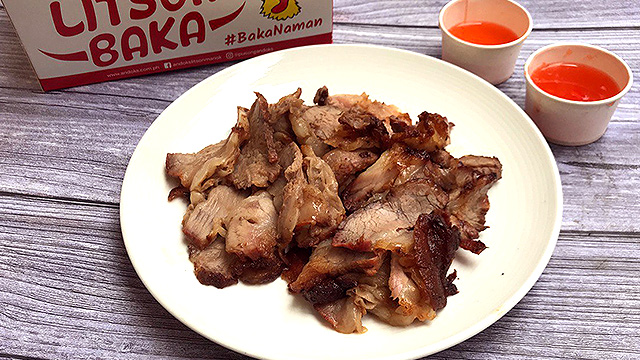 Why Is Everyone Talking About the Litson Baka From Andok's?

We tried the social-media famous dish, and here's what we think.

(SPOT.ph) Some food trends take off from their being inherently novel or offbeat—sushi bake for example was a fairly contemporary idea when it gained viral status in 2020, as was the concept of putting leche flan in doughnuts as it was also brought forward by New York-based Kora in the same year. But there’s also the other kind of food trend where you take an existing dish and do it really, really well. It’s in that latter category that we would put the recently trending Litson Baka of Andok’s, which was introduced in late May and has pretty much taken over social media by storm.

What Is Litson Baka?

The word lechon itself comes from the Spanish word for suckling pig, and in the Philippines, litson or lechon refers to the Filipino dish of roasted suckling pig by default. But in the same manner that you have chicken burgers and fish burgers, we also have lechon manok or roasted chicken and lechon baka or roasted beef or calf—which, as with suckling-pig based lechon, are generally cooked slowly with charcoal over an open fire.

Let’s zoom into lechon baka for a moment. You’d occasionally see it at some celebrations, listed as a menu item at some establishments, or sold at weekend markets—but it’s not as popular as its pork or chicken counterparts, at least not here in Manila. Neither does it automatically come to mind when you think of Filipino beef or meat dishes. It’s interesting how this version in particular took off, making multiple appearances on our social-media feeds in the past week that we had to find out what the deal was for ourselves.

Here's what we think of the famous Andok's Litson Baka:

At the moment, the Litson Baka is only available at selected Andok’s branches and is unsurprisingly in high demand. We coursed our order through GrabFood and had to wait about an hour and a half for it to arrive despite the store being just 3.5 kilometers away, with our rider sending us a photo of the long line of fellow riders (who, as it happened, were ordering the same thing!). No matter, it eventually arrived in its signature cardboard box, bearing its name and the ingenious accompanying tagline, #BakaNaman.

You’ll find a foil-wrapped package of the meat inside the cardboard box. For P320 (in-store; it goes for P352 if you order via Grab), you get a portion of meat we'd estimate to be good for two to three (it's 450 grams when weighed raw, according to their Head Office). Most slices come thin and are generally lean with a small top layer of fat, but you also get a couple of thicker chunks as well as fattier pieces. The edges are beautifully charred, giving you a wonderful smoky aroma as you unwrap the meat from the foil.

The meat does have a chewy and homespun sort of character to it—this ain’t no fancy melt-in-your-mouth Wagyu (nor is it trying to be)—but it’s still overall moist and tender, thanks to its just-right amount of fat and the thinness of (most of) the slices. You could very much savor these slices on their own, sans the need for sauce, though it does come with a peculiar sawsawan (more on that later).

And the taste? We’d give a chef’s kiss to this if we could. There’s a subtle smokiness to the Litson Baka similar to what you get with the other roasted meats in Andoks’ roas... er, roster, which gleefully sets it apart from your typical Western-style roast beef. It’s seasoned right without being too salty and there’s a touch of sweetness too; you get an overall balanced profile that highlights the natural flavor of the beef.

Though great by itself, we could totally see this working beautifully in a sandwich or burrito, on top of hot rice (fried egg optional), wrapped in lettuce leaves with ssamjang and kimchi (KBBQ-style!)—the list goes on.

An especially interesting bit about Andok’s Litson Baka is that they forego the usual gravy or jus-type sauce and instead have you pair it with… vinegar. Their spiced vinegar, to be exact, which is similar to the kind you get at fishball stands with its fruity sort of sourness, touch of earthiness (from what seems to be finely minced onions in the mix), whisper of sweetness, and just-right kiss of heat.

We were skeptical, but it works—though you get a very different experience from your textbook roast beef. Its acidity mingles beautifully with the charred flavor of the beef and counters its richness too, which makes it all the more difficult to resist going for another serving. Truthfully, we prefer the Litson Baka plain as you get to relish in its natural flavors better that way, but it’s worth giving them a dip in the vinegar every few bites.

Andok’s has been around since 1985 and makes some of our favorite litson manok, which is also what they’re best known for. We’re happy to report that they extend that same good hand at roasting meat to beef—and we can see the Litson Baka becoming a returning favorite for the years to come.

See a list of Andok's branches that sell the Litson Baka. For delivery orders, find Andok's on GrabFood. You can also check out their Facebook page.