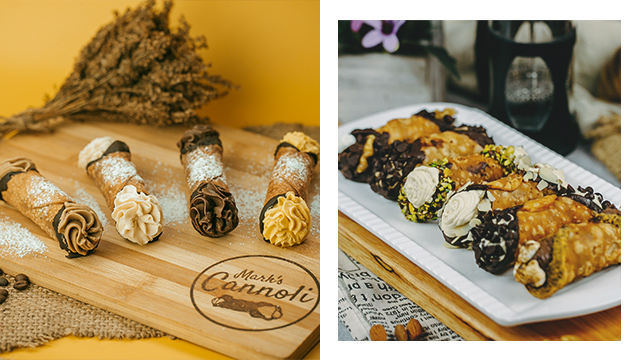 PSA: Here's Where You Can Get Great Cannoli in Cebu

Yup, this Italian pastry has landed in the Metro.

(SPOT.ph) If you’re wondering what a cannoli is, you’ve come to the right place. If you’re anything like us, then it’s probably the first time you’ve heard about this Italian dessert—and yes, you can get it in Cebu. Mark’s Cannoli is a local brand that specializes in—what else—cannolis. It’s literally the only thing on their menu, although in a variety of flavors.

Unsurprisingly, the mystery of a new dessert, relatively speaking, is part of the appeal. If you’re wondering how this pastry made its way across the globe to our shores, then you have Mark Guiller Lasaleta and his desire to introduce fellow Cebuanos to something we haven’t tried before to thank.

Lasaleta is a formally educated chef who gained experience working around the world but came home due to the pandemic. And in the midst of all the crazy times—an understatement, we know—an idea was formed. “We thought ‘What can we bring to Cebu that was not yet here but people around the world love?’ I woke up one day and thought of cannoli. It originated in Italy and is now very famous in Europe, U.S.A., Canada, and many other countries. The crazy thing is, even though the cannoli is really popular around the world, Cebu was not fully exposed to it just yet!” he says in an online exchange with SPOT.ph.

From there he started developing the recipe himself. Even the pastry for the shells was made from scratch—and they still make them fresh daily. “One of the most important things of a yummy cannoli is the crunchiness of the shell,” Lasaleta explains.

Their story reads like somewhat of a fairy tale, if of the business kind. What started as an online shop on June 21, 2020 just grew, and grew, and grew. They sold more than 100 pieces of cannoli per day in their first two weeks of operating, a streak that brought them to opening their first physical location at Sugbo Mercado in December that same year. All that in barely six months.

So, How Does It Taste?

Turns out, this crunchy shell is akin to a crispy waffle cone, except it’s been fried then lined with chocolate. The filling of a traditional cannoli is sweetened ricotta. Their take on the filling, however, felt lighter than how one would expect; likely adjusted so it doesn’t overwhelm the palate. The fillings come in Original, Lemon, Chocolate, and Coffee—classic flavors that come at P45 each. Then Mark’s Cannoli gets creative by adding marshmallows, chocolate chips, pistachios, almonds, peanuts, and even graham crackers to the fillings. These combinations make up the Premium Flavors and cost P65 each. And if you want to go the price savvy route, get them in boxes of threes, fives, or tens. Great for sharing, or savoring by yourself. We totally get it.

Our immediate favorite was the Java Chip, which has a coffee filling and chocolate chips. (Not to be confused with the Chocolate Chips flavor, which has a chocolate filling.) The bitterness of the coffee contrasted well with the sweetness of the airy cream and crunchy shell, while the chocolate chips added a fun bit of crunch to the whole thing. Think of it as a full-on textural, multi-layer experience in a single, very satisfying pastry.

A runner-up would have to be the Lemon. Despite its unusual coloring—that intense hue may be off-putting to naturalists, but we say give it a try—the refreshing fragrance of the fruit was a good counterpoint to the richness of the dessert. The S’mores, on the other hand, is a good way to try out the chocolate filling with a little something extra. Sure, the marshmallows added just a little bit of oomph in a gustatory sense, but the main highlight was how joyous the treat looks. If you’re in it for the flavor, then Rocky Road is a more solid option.

Overall, Mark’s Cannoli is a great introduction to the Italian pastry. After two years of being landlocked, who doesn’t want to travel by way of the palate anyway?

All photos courtesy of Mark's Cannoli