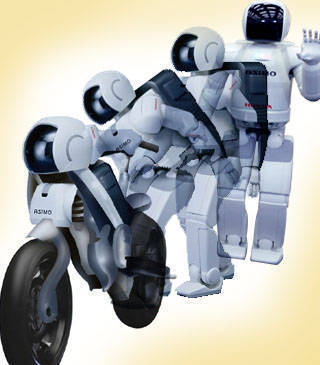 More Than Meets the Eye

Transformers: Revenge of the Fallen is coming up and there's a lot of talk about whether it will outdo the first one. New robots like Arcee and Jetfire are slated to appear, adding to an already star-studded cast of famous machines.

Of course, the humans are not to be outdone with the ever innocent Shia LeBouf and the foxy Megan Fox reprising their roles, but if you ask us, we think the movie could use a little more star power–and no, we're not talking about hiring more Hollywood A-listers.

As you might have seen in the last movie, common everyday items can now be given the ability to transform. Knick-knacks like toasters and cell phones could be made to morph into an automaton. We've rounded up a list of these well-known bucket o' bolts and their potential transformations.

C3PO from Star Wars (Desktop PC)
We all know him as that chatty droid that gets on the nerves of every character in the Star Wars universe, but C3PO also has his good points. He's very knowledgeable and that could be a lot of help in many sticky situations. C3P0 would definitely be a desktop computer if he were a Transformer, with his (supposedly) large memory and multi-tasking capabilities. That circular thing on his belly looks like a disc drive. And like a true PC, he crashes a lot.

Bender from Futurama (Garbage Truck)
Bender (full name Bender Bending Rodriguez) is a wise-cracking robot powered by alcohol. Needless to say, he's rarely seen without a beer bottle or a wine glass in his hand. Once he's done chugging the sauce, he simply chucks the empty cans and containers directly to his belly–where everything from broken watches to fruit peelings have been spotted.

ED-209 from Robocop (Tank)
Originally made to aid the Detroit Police in fighting crime, Enforcement Droid Series 209 soon became irrational, ultra-violent, and uncontrollable. It basically shoots and runs over every obstacle in its way. ED-209 would definitely be a Decepticon.

R2D2 from Star Wars (Vacuum Cleaner)
Always there to clean up messes, comes with different tools and attachments, and very difficult to clean. What else could he be?

Femisapien by WowWee (Rocket Ship)
As a robot categorically classified as a female, Femisapien sports a sleek visor and an eerily sexy smile for an inanimate object. Her curvy body and wide base is reminiscent of the Russian Soyuz rocket that gave the Americans a run for their money during the space race of the 1960s.

Asimo by Honda (Motorbike)
The name Asimo officially stands for Advanced Step in Innovative Mobility. First unveiled during the turn of the millennium, his make already gives us a clue to what he could be: a motorbike. Think about it: he's powered by Honda, moves quicker than most robots today, and he delivers food. Oh, and when he's not careful, he can really hurt himself.

Robot B9 from Lost In Space (Jukebox/Karaoke Machine)
"Danger, Danger" and "Does not compute" are just some of the lines that the robot from the classic TV series has made famous. Unfortunately, it also made him as annoying as heck. Couple that with his flashing torso and he'd definitely be a standard-issue kanto Karaoke Machine. "My Way," anyone?

Transformers Revenge Of The Fallen
Your Guide to Thriving in This Strange New World
Staying
In? What to watch, what to eat, and where to shop from home
OR
Heading
Out? What you need to know to stay safe when heading out