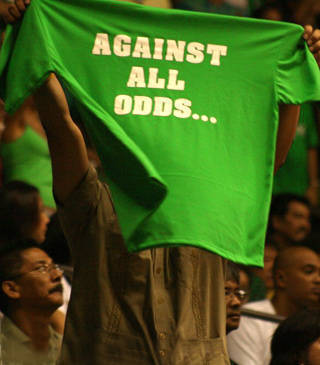 Top 10 Reasons why La Salle is Better than Ateneo

Still basking in the glory of their last win last weekend against the UST Growling Tigers, the De La Salle Green Archers are working their way up to the finals. A La Sallite tells us why green is better than blue.

The biggest rivals in Philippine college basketball meet anew on the court this weekend, as La Salle and Ateneo, fight it out for school pride. Even NBA player Gilbert Arenas of the Washington Wizards, describes an Ateneo-La Salle game as, "you split the crowd in half, 50-50. One side of their gym was blue and one side of their gym was green and everybody was just yelling."

Writer Karl Bustamante, La Salle alumnus and one of the Archers' biggest fans, tells us why the Archers are way better than the Eagles:

10. La Salle is known for their dreaded full court press. Ateneo is known for… Chris Tiu.

Ever since Franz Pumaren took over coaching duties in La Salle in 1998, the squad has been known for their full court press. Even 2002 Ateneo head coach Joel Banal admitted to having nightmares because of DLSU's press. Ateneo isn't known for any kind of play. Just Chris Tiu.

A fan video of Chris Tiu.

9. La Salle sticks to the 4-year limit of student players in the UAAP. Ateneo let Chris Tiu (among others) stay another extra year.

Ryan Arana, Mark Cardona, Joseph Yeo, and Rico Maierhoffer all graduated when they were supposed to and moved to the PBA. LA Tenorio, Ford Arao, Wesley Gonzales, Doug Kramer, and Chris Tiu all opted to stay one more year just to play in the UAAP. Can you say "terminal"?

The DLSU versus UE game in Season 70.

8. La Salle was the only team to beat the UE Red Warriors in the 2007 UAAP season.

Ateneo came close but it was eventually La Salle who put a blemish on the Warriors' otherwise perfect record. And the clincher is, DLSU won when it mattered, sweeping UE in the finals.

In the 2007 Nike Summer League, La Salle and Ateneo were supposed to meet at the finals. But when it came time to play, they forfeited their spot in the finals so they could go "train" somewhere abroad, leaving DLSU and FEU to battle it out. DLSU won. Ateneo fled.

6. La Salle has more championships in the UAAP.

Since moving to the UAAP, DLSU scored 8 championships as compared to Ateneo's 4. There's a lot of catching up to do for the blue side.

5. Kobe Bryant has got La Salle's back.

Being acknowledged by Kobe is just really worth mentioning.

Coach Pumaren obviously has fun with the boys.

Ever since Franz Pumaren was appointed head coach of the Green Archers 11 years ago, he has led the squad to eleven trips to the final four and five championship titles. This is something the La Salle community appreciates so he remains the DLSU coach. Ateneo on the other hand gave the boot to Joel Banal and Joe Lipa even though they gave the Eagles a championship title. So we recommend Coach Norman Black start handing out his resume just in case.

Although we can say both teams have had courtside reporters who are easy on the eyes, being a CSR is more than that. It requires confidence and eloquence. And no team's CSRs can top DLSU's reporters: George Rocha, Agnes Tapia, Hazel Aguilon, Micky Deles, and most especially, Sharon Yu. The only ADMU CSR that made an impact, in my mind is Patty Laurel.

2. Ateneo has a live mascot.

The fact that they spent time putting together a mascot of an eagle in an Ateneo jersey is just really corny. Nobody even pays attention to that eagle. You don't see La Salle bringing Robin Hood along in every game do you?

UST takes the championship in Season 69.

1. La Salle knows how to bounce back - with a vengeance.

Yes, DLSU got suspended for a year because of an ineligible player. But the Archers admitted it and served the one-year suspension. But the season after that, the hungry DLSU squad won the championships. Ateneo couldn't even capitalize on their absence in Season 69, losing to the hardworking UST growling tigers, 76-74.

Click here to read Top 10 Reasons why Ateneo is better than La Salle.

SPOT.ph wants to know, what are the other reasons why La Salle is better than Ateneo?

Dlsu La Salle Uaap Basketball List
Your Guide to Thriving in This Strange New World
Staying
In? What to watch, what to eat, and where to shop from home
OR
Heading
Out? What you need to know to stay safe when heading out