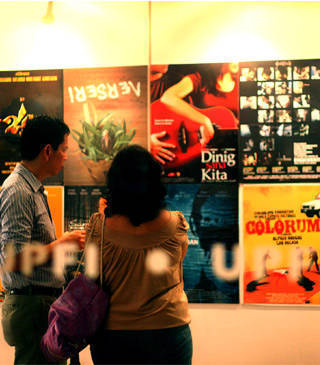 Cinemalaya Cinco 2009 ended with champagne, cocktails and camaraderie for the filmmakers. 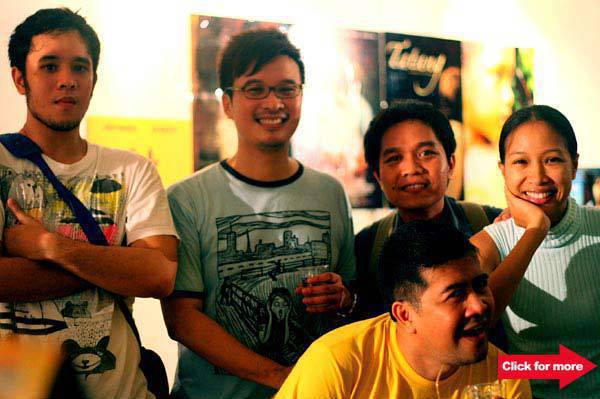 Indie filmmakers and film enthusiasts threw competition out of the window as they feted the success of the
Cinemalaya Cinco 2009 over canapés and cocktails at the Ishmael Bernal Gallery in UP Diliman.

Organized by the University of the Philippines Film Institute (UPFI) with UP Cineastes and Cinemalaya "as a get together and as a gesture to acknowledge the film makers of the festivals," says UPFI Theatre Coordinator Yason Banal, the festive cocktails gave filmmakers time to bond with their fellows. "It's (Cinemalaya Film Festival) really not a competition but more of a camaraderie," says Mark Philipp Espina, who won Short Films Best Screenplay for Behind Closed Doors.

Espina adds he became close with the other Cinemalaya participants and did not expect to bag the award because the other short films were "very good" especially Bonsai, which won best film.

The Cinemalaya citations were scattered among the participants this year. Cinemalaya film programmer Edward Cabagnot said, "This year's Cinemalaya is different from last year because there is no clear winner and the film makers have equal strengths."

Adolf Alix Jr., who recently participated in the Cannes Film Festival in France, says this year's Cinemalaya is interesting because of the variety of the entries. Cinemalaya Cinco 2009 entries' film genre ranged from horror to satire. Each film stands out in the chosen genre leaving audience either in awe, shock, amusement or tears.

Cinemalaya 2009 full-length feature Best Film Last Supper No. 3 colored its depiction of the country's legal system with a little humor but offered the audience a critical view of the realities and oddness of the society.

On the other hand, Ang Paggagahasa kay Fe by Alvin Yapan redefined horror. The horror fantasy film won the Special Jury Prize, an award given to films deemed as exemplars of Filipino filmmaking possibilities. Yapan says the film "is a reaction to the normal horror in primetime TV and cinema houses. It is a venue for something more than just a genre tactic."

The other finalists bordered on drama and adventure. Amidst the diversity in genre, among the common elements found in the films were artistry, social relevance and craftsmanship.

For some of the filmmakers, showcasing their masterpieces and receiving appreciation from the public are the most fulfilling part of joining the Cinemalaya Film Festival.

Dexter Cayanes, who won the Best Director award for Musa in the short features category, says being recognized for his artistic film rendition of the poems of great Filipino poets Jose Corazon de Jesus and Amado V. Hernandez was great. Aside from the award he says directing veteran actor Nanding Josef and transforming teen star Ryza Cenon into his vision of a muse gave him a sense of fulfillment.

For Vic Acedillo, Jr. , who bagged the Best Screenplay for Nerseri, it is the freedom to show his passion that makes filmmaking rewarding.

Likewise, Audience Choice award recipient Nico Hernandez for Tatang says his film is inspired by his passion to feature the tales of the people he met during the short period that he was a broadcast journalist.

Realizing goals at an early age makes the young directors fulfilled. Maita Lirra Reyes Lupac, Hulagpos filmmaker says, "I've already achieved what I wanted by joining Cinemalaya." Reyes is a fresh graduate from the UP Diliman College of Mass Communication and Hulagpos was actually her college thesis.

Pepe Diokno, a film major at the UP Diliman College of Mass Communications has been joining Cinemalaya for years. "It feels really good. It's like I have my future all set," he shares.

Logistical constraints also figured in the process but film makers easily surpass these challenges. Mangatyanan director Jerrold Tarog says cooperation and good relationship among the staff helps them get through those problems.

Dinig Sana Kita, which won Audience Choice Award, will have a solo run at the Robinsons Galleria's Indie Sine starting August 26 with three screenings daily, according to the film's Facebook fan page.

Cinemalaya Film Fest Cinemalaya Cinco
Your Guide to Thriving in This Strange New World
Staying
In? What to watch, what to eat, and where to shop from home
OR
Heading
Out? What you need to know to stay safe when heading out