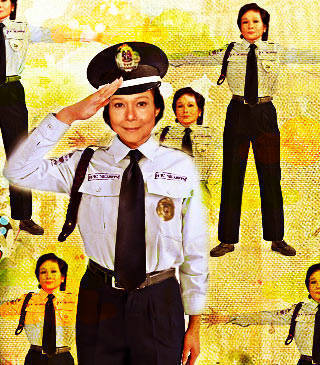 I'm so glad Kimmy Dora is doing well at the box office. According to reports, the Bb. Joyce Bernal-directed comedy starring Eugene Domingo made 15 million in its first week. That's pretty awesome for an independent film with a relatively unknown lead actor. Even better, Kimmy Dora unified the audience. Whether bakya crowd or the well heeled, whether watching in SM Santa Mesa or at the Power Plant cinemas in Rockwell–people went to the movies for Kimmy and Dora Go Dong Hae.

I guess people want to laugh these days. It's been quite somber around here.

So I'm looking forward to the stuff Spring Films will churn out now that their first effort paid off. Please, please, please let it be the good stuff!

This got me thinking: what kind of movies do I want to see?

Lady Guard, the story of a lonely middle aged "tomboyish" lady guard who works at the children's museum. The lady guard develops a special relationship with the eccentric music teacher who conducts the children's choir. Imagine the painfully awkward love scenes in this dramedy starring (ideally) Nora Aunor and Tirso Cruz III. (Wait, isn't she in jail for stashing 8 gms. of shabs in her bag?)

Or what about paying homage to Brian de Palma's Phantom of the Paradise and the 1958 Sampaguita Pictures movie Beloved starring Gloria Romero and Rick Rodrigo? You know: scarred monster/musical genius pining and plotting away for the beautiful muse. It's a tragic Pinoy-kitsch melodrama but stylish, tight, and darkly glamorous. Shot around the CCP, with the architecture informing the film's aesthetic. Ooh, the potential soundtrack…with Iza Calzado as the damsel, Noni Buencamino as the scarred monster, and Baron Geisler as the surprising choice for the romantic lead.

Okay, last: a Lino Brocka biopic. Brocka was so ahead of his time: a poor boy who had to fake an American accent to get work, an outspoken gay activist strutting his stuff in an oppressive political climate, a legendary director whose body of work deftly portrays all the damages of our culture. Needs to be chockfull of showbiz gossip, political intrigue, a bunch of cameo appearances, old news footage…starring…okay, I'm out of ideas and open to suggestions.